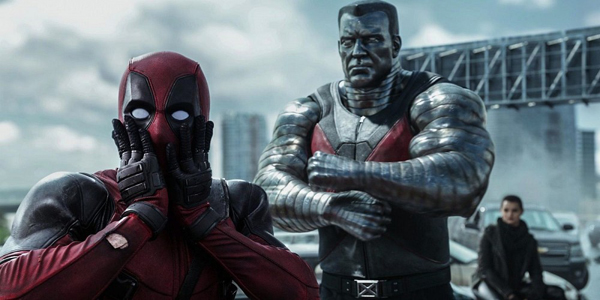 I skipped Deadpool when it was released in theatres earlier this year.  I was impressed that Ryan Reynolds had gotten his passion project made, and super-impressed that Fox had the guts to release an R-rated superhero film (and, even more, one that was directly connected to their X-Men film franchise).  And yet, I’d never been much of a fan of the Deadpool character (I am an old enough comic book geek that I was reading and bought Deadpool’s first appearance in New Mutants #98 when it was first published back in 1991) and it didn’t look like the humor of the film was up my alley.  So I passed.  Still, I’d heard such good things about the film that, towards the end of 2016 as I tried to catch up with as many notable films of the year as possible, I decided to give it a try.

I certainly enjoyed the film, and having watched it I am even more impressed that Ryan Reynolds and director Tim Miller were able to get this profane, violent super-hero film made.  But I also see that my earlier instincts were correct, and the violent and profane tone of the film wasn’t one that really spoke to me.  There were certainly plenty of jokes in the film that made me laugh — either because they were just plain funny, or because I was so shocked and impressed that such an envelope-pushing moment had made it into the film — but also just as many moments that fell flat for me.  All the violence and cursing and references to masturbation felt juvenile.  While I can see why so many people love this film, it’s not really for me.

There is no question that this is a near-perfect depiction of the comic book character.  Deadpool looks (the costume is spectacular) and sounds great (Ryan Reynolds truly was born to play this character).  His fourth-wall-busting address-the-audience nature has been preserved, thankfully, and the film is just as over-the-top violent and crazy as his best comic-book adventures.  There aren’t many second-chances in show business, so after the character was so spectacularly botched in the no good, horrible, very bad X-Men Origins: Wolverine, it’s pretty magical that, so many years later, Ryan Reynolds was given the opportunity to reprise the character and to do it right.

Right from the very silly opening credits (and bravo on the reference to Deadpool creator Rob Liefeld right there at the top), the filmmakers set the tone that this was going to be a very silly, borderline disrespectful take on a superhero film.  What’s impressive about Tim Miller’s achievement is that he is able to marry that tone with a film that is able to be exciting and action-packed, allowing that action and the threats to Deadpool to have weight, rather than the film’s just being a goofy parody.

Ryan Reynolds gives the film his everything, and he’s able to perfectly capture the profane, manic energy of the comic-book character and all of his fast-talking, take-nothing-serious charm.  Morena Baccarin doesn’t have much of a character to play as Wade Wilson’s girlfriend — Vanessa is a sort of geek’s dream girlfriend, a beautiful woman who loves having lots of sex and also quotes The Empire Strikes Back and is willing to wear a Voltron ring — but Ms. Baccarin brings a ton of energy and charisma to the screen, and she’s fun to watch together with Mr. Reynolds.  I really like T.J. Miller (I’ve been enjoying his work in Silicon Valley, with which I’m catching up, and he was great in the recent Office Christmas Party) and he’s a lot of fun as Wade’s best friend and the bartender at some sort of villain/mercenary hangout.  Mr. Miller gets a lot of the film’s best jokes.

It’s a very surprising choice to me that the filmmakers decided to set this R-rated story in the X-Men universe.  I’d have thought they’d prefer to make this be its own thing.  But nope, we actually get to see Professor Xavier’s School for Gifted Youngsters looking exactly like it did in all of Bryan Singer’s X-Men films.  We also get to see two X-Men characters, Colossus and Negasonic Teenage Warhead.  Negasonic is a crazily named character from Grant Morrison’s run on the X-Men, and she’s a terrific character to utilize here.  They’ve changed her a lot, but as played by Brianna Hildebrand she has a great look and character, and she fits perfectly into the story.  Then there’s Colossus.  Sigh.  Colossus is one of my favorite X-Men characters and he’s never been done justice on-screen.  Daniel Cudmore played him in several previous X-Men films, but he never really looked or sounded the way I’d imagined him, and the character was never given much to do.  Here, at last, they’ve given Colossus a major role, but even though they’ve totally recreated the look and characterization of the character, they once again almost entirely miss the mark.  I will freely admit that this mostly CGI version of the character actually looks and sounds great, and he’s a very funny foil for Deadpool.  The character works great in the film, it’s just that this doesn’t at all feel like Colossus to me.  (It’s similar to how I love Tim Burton’s Batman even while I think it’s a terrible on-screen depiction of the Batman character.)

There have been a lot of great Stan Lee cameos in Marvel films but this film might have the greatest.

I’d commented above that the Deadpool costume looked great, and I have to give specific praise to Deadpool’s animated eyes.  It doesn’t make any logical sense, but it doesn’t matter, the effect works beautifully.  Deadpool is basically a Loony Tunes cartoon anyway, so giving him those cartoonish, expressive eyes was a terrific idea and worked amazingly well.

I’m glad to have finally seen Deadpool.  I have great respect for what Mr. Miller and Mr. Reynolds, with screenwriters Rhett Reese and Paul Wernick have accomplished here.  It’s not really what I’m looking for in a super-hero film, but I’m glad it exists and I’m pleased that the film was embraced so wholeheartedly by its fans.