Skip to the content
HomeWritten PostCatching Up on My Cartoons: Star Wars Rebels and a Return to The Simpsons 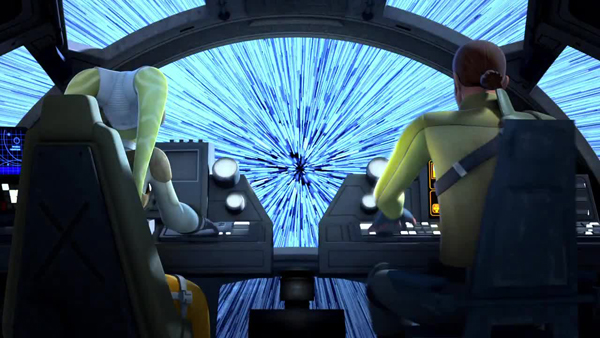 Catching Up on My Cartoons: Star Wars Rebels and a Return to The Simpsons

Well, the jury is still out on the over-all success or failure of Disney XD’s new Star Wars animated show, Rebels, but boy, including the droid Captain Rex from Star Tours in the second episode sure makes it hard for me to dislike the show!!  More on that in a moment.

Star Wars: The Clone Wars ran for five seasons on Cartoon Network, but was cancelled when Lucasfilm was sold to Disney.  That show started out with a truly dreadful animated movie, but somewhat miraculously turned into a pretty great show.  The animated that started out clunky became gorgeous (this season 5 trailer is a great example) and the story-telling, while still designed for an all-ages feel, became much more sophisticated.  The series shifted into a multi-part format, with most stories running for three or four episodes by the show’s end.  Over the seasons, we got to really dig into the scope and breadth of the Star Wars universe and the galaxy-wide Clone Wars in a way that was far more satisfying than the taste of the Clone Wars that the prequel movies gave us.  Eight seasons were planned, which would have taken the show right up to the start of Episode III; it’s a huge disappointment to me that we’ll never get to see this story’s proper conclusion.

But many of the show’s key creative personnel moved right into a new Star Wars animated show for Disney.  This is Star Wars Rebels, which takes place about five years before A New Hope.  The show focuses on a motley band of friends on the run from the Empire.  So far I’ve seen two episodes, the double-length premiere, “Spark of Rebellion,” and a second episode, “Droids in Distress”.  I’ve read some rave reviews of the new show on-line, but I’m not there yet.  I enjoyed these first two episodes enough to keep watching, but I’m not in love with the show yet.  It’s fun, but whereas The Clone Wars felt like it was telling the important stories that the prequel movies skipped, Rebels feels fairly irrelevant, since we know the main story of the fall of the Empire was told in the Original Trilogy.  But I’m hoping that, like The Clone Wars, this series will richen as it ages, deepening the characters and telling more compelling stories.  I’m also hoping that this series will eventually pick up story and character threads left dangling by the never completed Clone Wars.  Obi-Wan Kenobi popped up in the premiere, and I was particularly delighted that Bail Organa appeared in “Droids in Distress.”  If this series eventually builds to tell the story of the formation of the Rebel Alliance, I’d be thrilled for Bail (an intriguing character mostly ignored by the movies) to have a major role.  I was less enthused by the appearance of C-3P0 and R2-D2 in the second episode.  That felt like too soon for such major Star Wars characters to have a central role in an episode.  Let’s get to know and like this new crew first, and then bring in the big Star Wars guns, OK?  (Though I will admit to being delighted by the news that not only will Darth Vader be making an appearance in this series, but that James Earl Jones will be voicing his dialogue!)

But for all that the second episode was just mediocre, I will love it forever for the amazing reference to Star Tours!!  Star Tours, of course, is the old Star Wars-based Disney simulator ride.  Early in “Droids in Distress,” several of our heroes board an interplanetary transport, and I was immediately tickled to see the design of the ship resemble that of Star Tours.  And then we saw the droid pilot!  Sure enough, it was Rex from the Star Tours ride!  And they even brought back Rex’s original voice-performer, Paul Reubens, to voice his dialogue in the show!  That sort of old-school Star Wars love is very cool.

It’s certainly fun to see some familiar Star Wars designs (Imperial Star Destroyers, Imperial Walkers, Storm Troopers, Tie Fighters, etc.) brought to life in this cartoon.  The design of the show is terrific, based heavily on Ralph McQuarrie’s original designs for the first Star Wars film.  There are a lot of familiar Star Wars themes incorporated into the show’s soundtrack, which is also fun.  The show feels very much like Star Wars, so top marks for that.  Though, interestingly, in the second episode, when our heroes find themselves short on money, food, and fuel for their space-ship and so must take on a morally gray mercenary assignment in order to get paid so they can keep on flying, I found that it wasn’t Star Wars that the show reminded me of so much as Joss Whedon’s Firefly.  This show is no Firefly, but if it can find even a tenth of the magic of that show, then it will be a lot of fun to keep watching moving forward. 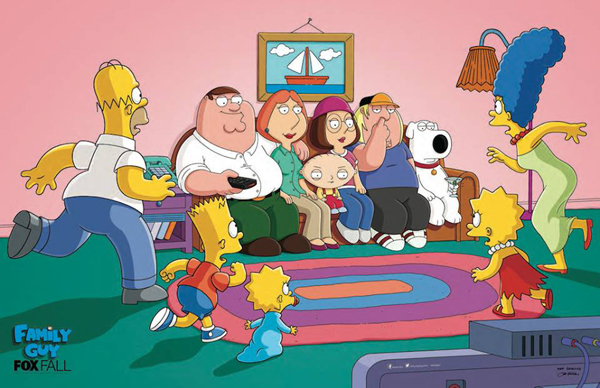 As for The Simpsons… well, I must admit that something that I never ever believed could have happened has happened, and a few years ago I stopped watching the show regularly.  It wasn’t a conscious decision, it’s just that for several years (’06-’10-ish) I found myself less than hooked on the show that I had once been such an enormous fan of.  I still enjoyed watching the episodes, but found there were fewer and fewer truly memorable episodes.  The Simpsons Movie re-ignited my passion for the show, but that enthusiasm dimmed by the less-than-great season or two of TV that followed the film’s release.  Gradually more and more unwatched Simpsons episodes piled up in my DVR, and last year to clear space I deleted over fifty unwatched episodes.

But the news that Family Guy would be releasing a Simpsons crossover episode really excited me, and I eagerly watched “The Simpsons Guy” when it aired a few weeks ago.  I have read some negative reviews of this on-line — and several friends of mine who watched the episode told me they found it to be mediocre — but man, I loved it!  I thought it was a brilliant melding of the two shows.  That’s a more difficult task than one might imagine, since the shows have very different looks and very different styles.  But the episode both looked and felt like it was both a “true” episode of Family Guy and a “true” episode of The Simpsons all at the same time, and that is a marvelous achievement.

I loved the way the episode incorporated familiar gags from each show, and the manner in which they compared and contrasted each of the show’s main characters was a hoot.  It was fun to see Homer hanging out with Peter and Lois hanging out with Marge, Stewie idolizing troublemaker Bart, Lisa trying to boost Meg’s self-esteem, and Brian walking Santa’s Little Helper.  I loved the very clever and meta device of the show’s second half, in which an argument over whether Family Guy’s Pawtucket Patriot Ale was a rip-off of The Simpsons’ Duff beer leads to a broader analysis over the many ways that Family Guy has, ahem, imitated The Simpsons (with a parade of familiar side-kicks from Carl & Cleveland to Mayor Quimby & Mayor West, right down to a moment in which we see on-screen, together, the Family Guy version of James Woods as well as the Simpsons version of him — a very funny and obscure joke that would appeal to the serious fans of both shows).  I was pleased that the show worked in many of The Simpsons’ huge supporting cast of Springfieldians, from the crazy cat lady to Kang and Kodos.  I also enjoyed the return to Springfield Gorge (though that reference to a very early Simpsons episode was something of a bittersweet reminder that the days of The Simpsons’ most memorable gags were far behind us).

I had so much fun with “The Simpsons Guy” that, for the first time in a long while, I sat and watched some new Simpsons episodes.  I have seen the first two episodes of the season, and they were both very solid.  In the first episode, “Clown in the Dumps,” Krusty’s father dies, sending the clown into a spiral of depression.  Meanwhile, Lisa begins to fear that Homer’s over-eating and carelessness will lead to his death.  Both story-lines were great, character-based stories that I enjoyed, and felt fairly fresh for a show in it’s twenty-sixth (!!!) season.  And the show was very funny, with some memorable moments (such as Krusty’s tour of Jewish heaven) and some great lines.  (My favorite is the start of Krusty’s visit to his psychiatrist, in which his shrink asks: “So, Krusty, what brings you here?  And don’t say clown car.”  The episode also begins with a lengthy, extremely weird couch gag created by Don Hertzfeldt.  I didn’t find it very funny, but I think it’s cool that this long-in-the-tooth show is still being so experimental.

In the second episode, “The Wreck of the Relationship,” Homer’s attempt to instill discipline in Bart backfires, and to help resolve their bickering Marge sends the two to a relationship expert at sea (“the Relation Ship”).  This feels like a far more familiar story than was in the first episode, as The Simpsons has done many Homer-Bart episodes over the year.  But the less-than-original story was bolstered by some great jokes, and a successful B-story in which Marge takes over Homer’s fantasy football team.  (Her horror at the men of Springfield’s on-line trash-talking was great.)

So, for now, I am back watching The Simpsons!  And happy to be doing so.  With a Halloween episode coming up (always one of my favorites of the year), I am excited.  Hopefully the show won’t let me down.