Skip to the content
HomeWritten Post“Destiny is on the phone!” Josh Reviews The Tick: Season Two 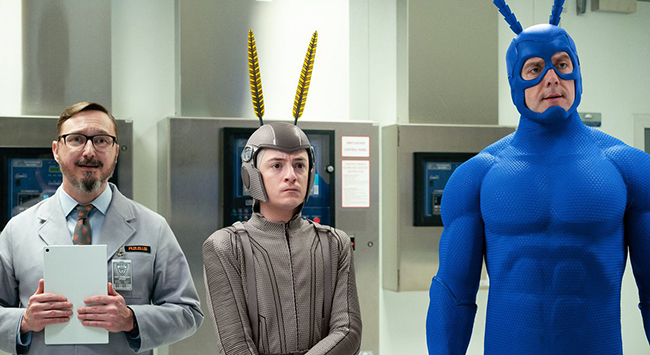 “Destiny is on the phone!” Josh Reviews The Tick: Season Two

I have loved Ben Edlund’s superhero parody, The Tick, in all of its iterations.  I read the original black-and-white comic book in the late eighties and early nineties.  I enjoyed Fox’s animated Saturday morning cartoon version, that ran from 1994-1996.  And I loved Fox’s short-lived live-action version from 2001, which starred Seinfeld’s Patrick Warburton as the Tick.  But I think my favorite of these three TV versions of The Tick is easily Amazon’s wonderful new live-action version.  And so, of course, the show was cancelled by Amazon last year, soon after the second season was released.  Dammit!

The show is a very funny parody of super-hero tropes.  At the same time, this isn’t just a spoof — this version of The Tick works as a comedy but also as a fun super-hero action-adventure.  There are real stakes, both physical and emotional, for all of the characters.  I love the balance the show is able to strike between these two sides of its story.

I’ve really grown to love the ensemble cast of this show.  Peter Serafinowicz (Guardians of the Galaxy, Spy), is absolutely perfect as the Tick himself.  Mr. Serafinowicz has the physicality for the character, and he perfectly nails the Tick’s “hey, chum!” enthusiasm and innocence.  Griffin Newman is a fantastic partner for Mr. Serafinowicz as Arthur, the not-so-superpowered friend/partner/sidekick of the Tick.  I love the humanity that Mr. Newman brought to Arthur.  Arthur is a nerd, but he’s noble and brave and heroic in his own way, and Mr. Newman’s performance really allows those elements of the character to shine.  Valorie Curry was terrific as Arthur’s sister Dot.  She was my favorite character on the show!  I loved how central the show allowed Dot to be.  The writers served up a great twist this season, when Dot begins to develop a precognition super-power, and I loved her bizarre relationship with Overkill.  Speaking of which, Scott Speiser was so great as the grim, dour Overkill — a parody of grim, dour super-hero vigilantes — who the show gradually developed into a very endearing character.  Yara Martinez continued to be so funny as Miss Lint.  I loved seeing Lint experiment this season with being a hero, under the new identity of Joan of Arc.  It was fun to guess whether Lint would allow herself to truly become a hero or whether she’d fall back on her villainous tendencies.  Alan Tudyk (Firefly) was hilarious, as he always is, as Overkill’s sentient boat/partner, Dangerboat.  (Dangerboat was one of the series’ best additions to The Tick lore!)  And Brendan Hines was good fun as the Superman-like superhero Superian.  Mr. Hines was very funny playing Superian’s mid-life crisis this season!

Season two picked up right where the end of season one left off, with the S.H.I.E.L.D.-like agency AEGIS back on the scene to monitor the super-heroes.  I loved that Arthur was star-struck at the idea of getting to be a card-carrying AEGIS-approved hero, while the Tick cared little for anything that didn’t have to deal directly with battling evil.  The show had a lot of fun with this new agency, and I enjoyed all of the new characters we met through AEGIS.  Marc Kudisch was great as the hilariously-named Agent Tyrannosauras Rathbone, the square-jawed, tough-as-nails, Nick Fury-Like head of AEGIS.  John Hodgman was perfect as the AEGIS scientist Dr. Agent Hobbes.  (I laughed every time a character said “doctor agent”.)  I also really enjoyed the silly new superheroes, Flex and Sage.  (Sage’s mystical third nipple — shades of The Man With the Golden Gun — made me laugh!)

Other thoughts on season two:

* I loved seeing how skilled Arthur was at all of AEGIS’ complicated forms.  I loved his flirtation with the female agent handling the forms.

* I absolutely adored the brilliant parody, in episode six, of the infamous “can you read my mind” sequence from Superman: The Movie.  GENIUS!!  This might have been my favorite moment in the entire series.  I also dug the moment in episode eight in which Superian joked about putting all of the world’s nuclear weapons into a big net and throwing them into the sun, a great dig at a ridiculous sequence in Superman IV: The Quest for Peace.  We also get a great moment late in the season when Superian contemplates turning back time (the way Superman insanely did at the end of Superman: The Movie), an action that would have devastating consequences for all the inhabitants of Earth if he really attempted to reverse the Earth’s spin…  There was a lot of love for the Christopher Reeve Superman films this season!!  That made me very happy!

* I loved getting to see more of Arthur’s parents this season.  I loved the revelation of Walter (Lost‘s Francois Chau)’s secret past.  And I loved that they gave Arthur’s mom Jan (Patricia Kalember) a spotlight late isn the season.  It was nice that they fleshed out her character and made her more sympathetic.

* I thought the season finale was genuinely thrilling, as the conspiracy behind AEGIS was finally revealed.  I loved learning that Kevin was a “category”!  (I loved the show’s use of that term for super-powered people.)  I love the moment in which “The Tick chooses love!”  The Tick’s choosing love over fear was a great culminating moment for the show.  I loved that this silly show staked so much, m in the end, around that positive and uplifting message.

* The end of the season finale was satisfying.  However, with the series’ having been cancelled, I wish there weren’t so many tantalizing loose ends remaining.  We never learned Rathbone’s true nature.  (“It’s gonna be a whole thing, you’ll see,” Sage enigmatically comments in the finale, a brutal tease of the audience!)  We never see what happens with Superian’s becoming a fiugitive, nor do we get to see the ultimate resolution of Miss Lint’s story and her apparent turn back to villainy at the end of the season.  Sigh.  What a bummer!

Still, as sad as I am that the show is over, I sure enjoyed it while it lasted.  I highly recommend this wonderful super-hero comedy.  It was a wonderfully enjoyable, unique TV show.  I dearly miss it, already.