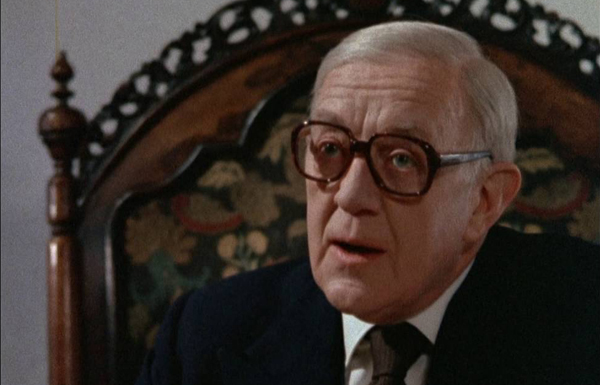 A few years ago, before the American film adaptation of John le Carré’s Tinker, Tailor, Soldier, Spy was released, I watched the 1979 BBC miniseries adaptation, which starred Sir Alec Guinness.  I loved that miniseries, and quickly looked to track down the BBC’s follow-up from 1982, Smiley’s People.  But for whatever reason, life got in the way and I never wound up watching it.  A few months ago, I finally read le Carré’s original novel Smiley’s People, and afterwards I decided that the time had come to watch the BBC miniseries version.  I am sorry it took me so long to get to, as it is magnificent!

Set several years after the events of Tinker, Tailor, George Smiley (Alec Guinness) is once again on the outs with the circus (le Carré’s name for the British secret service).  But he’s called in when an old Russian general, who Smiley had handled back in the day, is shot in the face soon after calling the circus with an urgent demand to meet with “Max” (the name by which he knew Smiley), saying that he had information concerning “the Sandman” (which Smiley recognizes as a reference to the mysterious Russian spymaster — and Smiley’s nemesis — Karla).  As Smiley begins piecing together the chain of events that led to the general’s murder, he begins to suspect that he has last found the key to exposing and defeating the wily Karla.

This six-part miniseries is an extraordinarily faithful adaptation of le Carré’s novel.  Just like the BBC version of Tinker, Tailor, this adaptation takes great care to bring le Carré’s novel to the screen with a minimum of adjustments.  It’s fun — and rare! — to see such a faithful adaptation.  The six-episode format gives the miniseries the time to do so, without the necessity of condensing things to fit into the format of a two-hour movie.  It’s a testament to the strength of le Carré’s original novel that the story works so well on screen, without needing all sorts of changes.

The BBC’s adaptation of Smiley’s People is a wonderful follow-up to their previous version of Tinker, Tailer.  Sir Alec Guinness is back as Smiley, of course, but so are most of the rest of the important supporting cast-members.  It’s a great pleasure seeing these actors — and these characters — again!  I love how smoothly Smiley’s People and Tinker, Tailor fit together, due to this continuity of the cast.  I loved getting to see more of Anthony Bate as Oliver Lacon, Beryl Reid as Connie Sachs, Siân Phillips as Ann Smiley, and especially Bernard Hepton as Toby Esterhase.  I was particularly taken with Mr. Hepton’s work as Toby, and I loved the way the miniseries spotlighted him in the latter half.  I always found Toby to be a somewhat enigmatic character in all versions of Tinker Tailor, but here in Smiley’s People we really got to know this slightly effeminate, highly-skilled, tough (but also desperate for Smiley’s approval) spy.  His bitter conversation with Smiley, when George finds him hiding out as an art dealer, is one of my favorite scenes in the entire adaptation, and I loved all the little moments in episodes five and six when we got to see Toby at work, during the effort to “burn” (that is, turn to their side) Karla’s man Grigoriev.

But, of course, this miniseries belongs to Sir Alec Guinness.  Guinness is extraordinary in the role, absolutely perfect.  He is able to nail every inch of Smiley — his meekness which allows others to underestimate him (at their great peril), and the steel that lies underneath.  This miniseries’ six-hour run time, and slow-and-steady pacing, allows the viewer plenty of time to soak in all the small details and nuances of Guinness’ performance.  This is a master class.  Like so many of my generation, I will of course always associate Alec Guinness with his role as Obi-Wan Kenobi in Star Wars.  And so it’s great fun to get to spend so much time with him here, and to be struck in awe of his iconic portrayal of Smiley.

Speaking of acting royalty, I was delighted to see Sir Patrick Stewart back as Karla, though bummed that, as was the case in Tinker Tailor, he didn’t say a word!  What a waste of one of the finest actors around (with such an amazing voice)!  Of course, this was a disappointment for me that originates in the books.  As I wrote a few weeks ago, I’d hoped that Karla would have more of a role to play in this story of his final confrontation with Smiley, but that’s not the story le Carré wrote.  I’d held out a small hope that they’d have given Patrick Stewart a few lines of dialogue here in the sequel, though I’d suspected that wouldn’t be the case — which is what happened.  Oh well!  It was still fun to see Captain Picard and Obi-Wan Kenobi lock eyes in the final moments of episode six.

The only major role that was recast was Peter Guillam, played in Tinker, Tailor by Michael Jayston, but here by Michael Byrne (who fans might recognize from his terrific performance as the villainous S.S. colonel in Indiana Jones and the Last Crusade, as well as his more recent appearance as Gellert Grindelwald — the role now played by Johnny Depp — in Harry Potter and the Deathly Hallows Part 1).  Mr. Byrne seemed a little old to play Guillam, but he’s such a good actor that I can’t complain too much.

There were so many wonderful, and memorable, new actors brought into the fold in this miniseries.  I loved seeing Michael Gough (who played Alfred in the first four Batman movies, directed by Tim Burton and then Joel Schumacher) as the Russian Mikhel.  I was tickled to see two famous Bond villains featured so prominently: Curd Jürgens (who played the Karl Stromberg in The Spy Who Loved Me) as the doomed general Vladimir, and Michael Lonsdale (who played Hugo Drax in Moonraker) as the poor sap Grigoriev.  Mario Adorf was very memorable as the German nightclub owner Claus Kretschmar, as was Vladek Sheybal as the “magician” Otto Leipzig.

As with the BBC adaptation of Tinker, Tailor, this is not exactly an action-packed miniseries.  Quite the contrary, this adaptation is remarkable in its patience, and the generally slow pace of the storytelling.  It’s an approach that, here in 2018, is extremely unusual.  But I loved it.  I never found this miniseries boring.  I was quite hooked into the story right from the beginning, and I loved the slow-and-steady way that this adaptation unfurled its story, in the same slow-and-steady manner in which Smiley was pursuing his quarry Karla.  Television is not paced like this anymore.  I know some might find this dull, but I was rapt with attention.

Although the sequel to Tinker, Tailor, Soldier, Spy was The Honourable Schoolboy, the BBC skipped that book and jumped to the third and final novel in le Carré’s Karla “trilogy,” Smiley’s People.  I’m a bit bummed that they didn’t adapt The Honorable Schoolboy, both because that was my favorite of le Carré’s Smiley novels that I’ve read, and because I’d give anything for there to have been more than just these two Alec Guinness-starring miniseries!  But I can understand why they skipped it.  Smiley is in the book but he’s not the main character, so it wouldn’t have served as a star vehicle for Guinness in the way Tinker, Tailor and Smiley’s People did.  Plus, Schoolboy’s setting (in Hong Kong and other Eastern locales) probably would have made it too costly for the BBC to adapt.  Oh well!

I’m glad to have finally seen Smiley’s People.  I feel this is a miniseries that I will return to in the future.  There is much to enjoy.  I wish there were more on-screen adventures of Sir Alec Guinness as George Smiley!!  But I’ll be happy with the two that we got.  If you’re looking for a great spy drama, I highly encourage you to seek out this out, along, of course, with the first adaptation of Tinker, Tailor.