Skip to the content
HomeMovie ReviewsJosh Reviews Batman: Soul of the Dragon 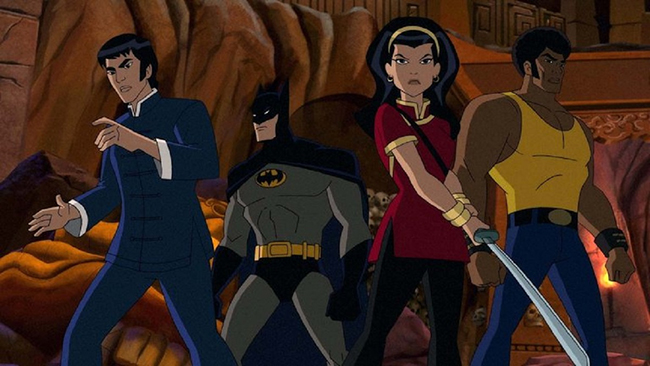 Batman: Soul of the Dragon is one of the most interesting DC animated direct-to-DVD/blu-ray films to come down the pike in the past several years.  This out of continuity story features Bruce Wayne/Batman and other (relatively obscure) DC characters in a 1970’s style martial arts action movie.  It’s a hoot!

The story is set in the seventies.  Bruce Wayne is just beginning his crimefighting career in Gotham City.  As the film opens, we meet Richard Dragon, an ass-kicking James Bond type, albeit one who uses martial arts.  Richard is on the trail of an evil secret snake cult called Kobra.  It turns out that Kobra is seeking the key to an ancient evil, one that is connected to Richard and Bruce’s shared past as younger men, when they trained together in the secret city of Nanda Parbat.  Also at Nanda Parbat, years ago, were Lady Shiva and Ben Turner (Bronze Tiger).  The four surviving students of their dead sensei must now reunite to combat this rising menace.

Soul of the Dragon is enjoyably dripping with seventies vibe!  The music, the outfits, the locations, all combine to give this movie a wonderfully retro feel.  I love how the film was able to incorporate aspects of Denny O’Neil’s classic martial arts DC comics from the seventies, as well as other movies from that era.

The film feels far more like a classic James Bond spy film than it does a superhero adventure, and I love it for that!  The movie wisely keeps Batman and the other characters in their civilian clothes for most of the movie.  It’s a great choice, one of many stylistic aspects that sets this animated film apart from the usual way these DC animated films play out.

That Bond movie approach is front and center right from the start of the film’s terrific opening sequence, a very James Bond-like opening in which Richard Dragon fights bad guys and then parachutes onto a yacht with girls in bikinis.  I thought that was hilarious and a great way to open the movie.

I liked that Richard Dragon, more than Bruce Wayne/Batman, was the main character in the film.  (Actually, there’s part of me that wishes Batman wasn’t in this movie at all, and that Richard could have been 100% the lead.  I understand they need Batman’s involvement to market these animated films, and I do love all the Batman/Bruce Wayne stuff in the movie.  Still, it would have been interesting to have allowed Richard, along with Shiva and Ben Turner, to carry the movie on their own.)  Richard Dragon is a cool character, and Mark Dacascos is very strong in the role.  I quite liked every member of the film’s main foursome.  David Giuntoli is great as Bruce Wayne/Batman, as is Kelly Hu as Shiva and Michael Jai White as Ben Turner. (In a very cool twist, Mr. White previously played Ben Turner on the TV series Arrow!)

The film boasts some fun, intricate martial arts sequences. There’s also a terrific, well-animated car chase in the middle of the movie that I loved.

I was impressed with how dark the film gets in places.  The bad guy is introduced by brutally murdering a prostitute.  I was not expecting that!  And the film’s ending is surprisingly downbeat.

If the film has a weakness it’s that all of the characterizations remain too superficial to suit me.  I wish we really got to know the four main characters (Richard, Bruce, Shiva, and Ben) better.  I wanted to get deeper into each of them and their conflicted feelings towards one another and their shared pasts.  I wanted to better understand why Shiva went from a noble student of O-Sensei to a crime lord.  I wanted to get more deeply into Ben’s experiences as a black man in the seventies.  I wanted to find more layers to Richard Dragon than just the noble, solitary hero.  Had the film explored those deeper levels, this really would have been a home run.

As it is, it’s a fun, engaging romp.  Bravo to director Sam Liu and Executive Producer Bruce Timm for creating this very original, unusual animated film.  I’d love to see a sequel!!