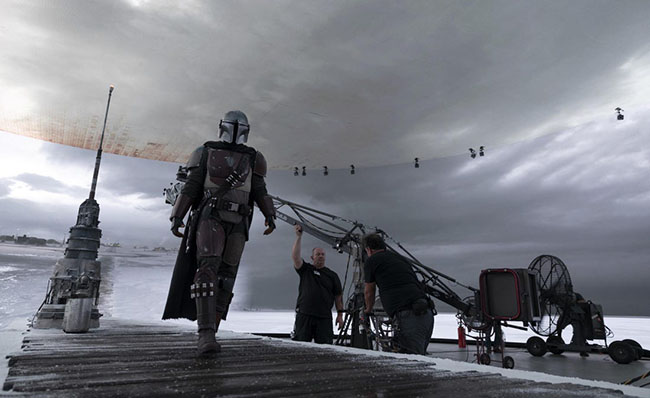 I loved the first season of The Mandalorian on Disney+, and I cannot wait for season two!  To help bide the time, Disney+ has released an eight-episode behind-the-scenes look at The Mandalorian, called Disney Gallery: The Mandalorian.  (It’s a wordy title that doesn’t really explain what the show actually is.  I wonder if they are planning future Disney Gallery shows looking at the making of other Disney+ series?)

The series is a mix of behind-the-scenes footage and new roundtable interviews with Jon Favreau (who created and executive produced The Mandalorian, in addition to writing six of the eight episodes) and Dave Filoni (mastermind of the animated series The Clone Wars and Rebels and executive producer of The Mandalorian; he also wrote one episode and directed two of them) and a variety of the men and women who were in key creative positions on the show.  Literally — it’s a group of people sitting around a round table and talking about the show.  We see a group of the directors (including Rick Famuyiwa, Deborah Chow, Bryce Dallas Howard, and Taika Waititi), the actors (including Pedro Pascal, Gina Carano, and Carl Weathers), and other behind-the-scenes people (including ILM’s John Knoll and Richard Bluff, animation director Hal Hickel, and Lucasfilm president Kathleen Kennedy).

The first few episodes started out a little slow.  I loved hearing these people talk about Star Wars (episode two ends with a show-stopper of a five-minute monologue by Dave Filoni, expounding upon his interpretation of events in The Phantom Menace), but the conversation seemed light on actual details of the making of The Mandalorian.  Things picked up dramatically for me in episode four, “Technology,”
which took a deep dive into the revolutionary technology utilized to create the astoundingly beautiful and photo-real visual effects of the show.  This episode completely blew my mind.  I was already impressed by the gorgeously beautiful, movie-quality visual effects on the show.  I am even more in awe now of the genius-level creative breakthroughs they utilized to make those effects happen.  That episode alone is a must-watch for anyone who enjoyed The Mandalorian and has any interest in seeing how the sausage was made.

Each episode had some fun tidbits, even the early ones.  I loved seeing all of the behind-the-scenes footage, exploring both the digital and practical effects, including sets, costumes, etc.  (There’s also some cool older footage from the archives that they drop in every now and then; I loved that stuff.)  While I was at first nervous about the extensive footage of the roundtable conversation, I found myself quite enjoying being a fly on the wall for those conversations.  It was fun to see the easy conversation among these collaborators — in particular the directors, who functioned as far more of a team than I’d at first expected.  Jon Favreau and Dave Filoni are great moderators, and while they tend to dominate the conversations somewhat, it’s hard to complain because they clearly brought so strong a vision to this project.  It’s fun hearing them talk, because their passion for the show, and for Star Wars in general, comes through the screen.  (Star Wars nerds like me will particularly enjoy the final episode, “Connections”, in which the gang — but mostly Dave Filoni — geek out over the many, many, many fun nods to all corners of the Star Wars universe that they snuck into the show.  If you’re not yet familiar with the long history among fandom of the ice cream maker from Cloud City, prepare to learn, youngling!)

Is this essential viewing?  Certainly not.  Is this Disney propaganda?  No question.  But if you’re a Star Wars fan and if you enjoyed The Mandalorian, this is a hoot and a half.  Pour yourself a glass of blue milk, sit back, and enjoy.