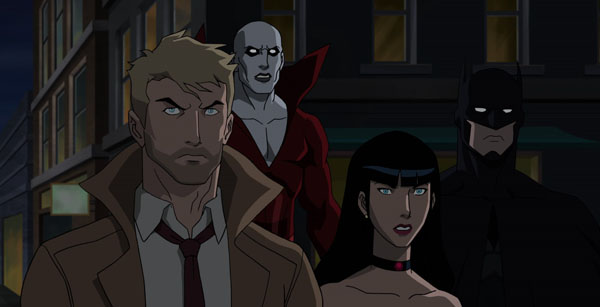 From Batman: The Animated Series, which launched in 1995, all the way through the final episode of Justice League Unlimited in 2006, Bruce Timm and a team of extraordinary writers and artists crafted an interlocking universe based on characters from DC comics.  This was long before the current popularity of connected universes, as every studio in Hollywood struggled to copy what Marvel Studios has done so successfully since 2008’s Iron Man.  In 2007, Bruce Timm returned to the DCU, at the helm of a series of stand-alone direct-to-DVD animated films.  There were some successes (the best was, I feel, Batman: Under the Red Hood) and some failures.  Eventually, Bruce Timm moved on to other projects, but the series of animated films has continued.  In 2014, with Justice League: War, they began connecting the animated films together again, in a series of stories based on the recent relaunch of the DC comic book universe called “The New 52.”  I was delighted at the idea that the films would connect to tell a larger story, but disappointed in pretty much everything else.  I didn’t love the “New 52” relaunch (other than Grant Morrison’s wonderful reinvention of Superman, which was almost immediately ignored once Mr. Morrison completed his initial story).  I felt the animated films were based on weak source material, had terrible character designs, and were so desperate in their attempts to be “adult” by adding in some sexual content, violence, and curse words that they wound up being more juvenile.  While the DC comic book universe has already moved away from the “New 52” reboot with yet another reboot, called “Rebirth,” the animated films based on the “New 52” are continuing, with the latest being Justice League Dark.

In this story, Batman’s investigations of a series of seemingly random incidents of civilians losing their minds and committing horrible atrocities because they were convinced they were seeing monsters leads him into the mystical, magical side of the DC Universe.  He meets up with John Constantine, Zatanna, Deadman, Jason Blood/Etrigan, Swamp Thing, and several other occult characters from the DCU.  Though Batman is initially distrustful of magic, it will take this motley team of magicians to end the threat to mankind.

I can’t say Justic League Dark is a great film, but I rather enjoyed it.  It’s easily the best film of this “New 52” animated continuity, though it possesses many of the flaws that weakened the previous films in this series, most notably horrific character design and juvenile dialogue for the characters filled with unneeded cursing and innuendo.  But this film actually has an interesting story, and it was fun seeing all of these bizarre characters from the DCU depicted on-screen.  Zatanna has appeared in previous DC animated TV shows, as has Etrigan, but seeing characters like John Constantine, Swamp Thing, and Deadman is a lot of fun.

The voice-cast is very solid.  In a great touch, they cast Matt Ryan as John Constantine.  Mr. Ryan placed Constantine in the short-lived live-action Constantine TV show.  I never watched that show, but Mr. Ryan is terrific as John, so they made the right decision to use him again, and I bet fans of that show are thrilled.  I like this version of Constantine.  He’s blunt and insensitive and arrogant, but he wants to do the right thing.  I like that the film played up John’s complex relationship with Zatanna, here played by Camilla Ludington.  I love Zatanna, and they do a good job with her character here, presenting her as smart and brave and loyal.  (Though, ugh, that chest-heavy character design is just atrocious.)  The biggest “get” of this film is Alfred Molina, who voices the villain Destiny.  I love Alfred Molina, and he’s great, though I wish Destiny had more of an actual personality instead of being “generic villain”.  (Mr. Molina was far more successful as the far more interesting villain Ares in the previous Wonder Woman animated film, an underrated 2009 film that starred Keri Russell as Diana and Nathan Fillion as Steve Trevor, both of whom were absolutely perfect.)

I have some issues with the film’s story. After a shockingly gruesome opening (in which we see some truly terrible things happen by the out-of-their minds people), the movie sort of ignores those events.  Aren’t these shocking murders continuing to happen while the whole rest of the film takes place?  I like that the Justice League immediately gets involved, but why is Batman such a dick to everyone, scoffing at the idea of a magical cause?  Magic IS of course the cause, and so Batman looks stupid for laughing at the idea, and then the rest of the team looks stupid for apparently not pursuing that solution.  (I guess this was a plot-device reason for the JL characters to not be deeply involved in this story, which is focused on different, occult hero characters.  But it doesn’t work.)

Was the terribly awkward line “since when does God need a force-shield?” an intentional Star Trek V reference?

And did they really use the shit-monster idea from Dogma?  Really??  Sigh.

* Nice touch with the “Hall of Justice” design of the Justice League’s HQ!

* I really enjoyed the character of Richie, played by Jeremie Davies (Lost).  Mr. Davies gives Richie a wonderfully distinct voice, with a distinct twang and an undercurrent of sorrow.

* The depiction of Swamp Thing was great.  I like that they used him sparingly and emphasized the elemental “force of nature” aspect of the character.  I also loved that it was Constantine who called him “Swamp Thing,” thus turning the character’s iconic but silly name into something of an insult.  I thought that was very clever.  (Only to sigh when the movie later has Swamp Thing call HIMSELF Swamp Thing when he reappears at the end.  Dumb!)

* Etrigan’s rhymes in the film were TERRIBLE.  They barely rhymed.  All of Etrigan’s dialogue needed a rewrite.

* I liked the depiction of magic through illuminated circular runes.  It was very similar to the successful look employed by Marvel’s recent Doctor Strange film.  I guess great minds thing alike.

* Enrico Colantoni does a nice job at portraying the slightly-off-his-rocker villain Felix Faust.  Batman’s dialogue makes it sound like the character has appeared previously in this new animated continuity, but I don’t believe he actually has.

For some reason, this film is rated R.  I have absolutely no idea why that is.  This film should barely be a PG-13.  It feels less violent, and with less innuendo, than many of the previous DC animated direct-to-DVD films, all of which were rated PG-13.  Did DC push for the R rating, as a marketing decision to cash in on the recent success of the R-rated Deadpool?  (The extended edition of Batman v. Superman was also rated R.)  I am scratching my head on this one, it seems crazy to me that this film is rated R.

Justice League Dark isn’t something I’d recommend anyone rush out to see.  But it’s a perfectly entertaining DC universe adventure, that spotlights several great but out-of-the-mainstream characters.  It’s head and shoulders above many of the other recent DCU animated films, though it doesn’t come near to reaching the greatness of Bruce Timm’s animated DC shows from two decades ago…