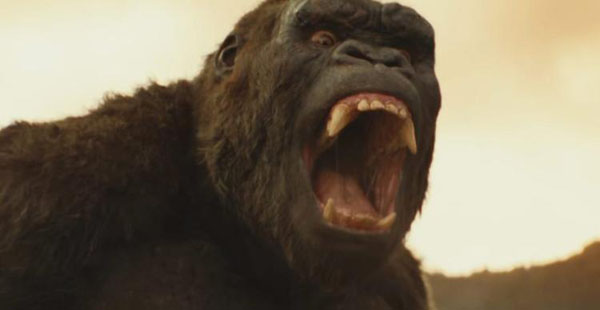 In 1973, as the United States forces leave Vietnam, a group of soldiers are assigned to what is supposed to be a geological expedition.  Unfortunately, it turns out their mission is at the behest of U.S. government agent Bill Randa (John Goodman), who is attempting to prove his theory that giant monsters exist.  Turns out he’s right, and he has led his unfortunate group to Skull Island, home of King Kong and lots of creatures that are even worse.

Jordan Vogt-Roberts’ film Kong: Skull Island is a fun, clever reinvention of the King Kong mythos.  The film is part Apocalypse Now, part monster movie, part multi-character ensemble drama.  It has some intense action beats and some moments of great comedy.  Skull Island is a robust mixture of a lot of different influences and elements, and somehow it all comes together to create an enjoyable, modern take on King Kong, a character originated in 1933.

I write “modern” take, though I was surprised that the film is actually a period piece.  The prologue is set in 1944, and the rest of the film takes place in 1973.  I love this choice.  The film has a slightly retro look that differentiates it from other recent monster movies, and the post-Vietnam setting winds up being a perfect opportunity for the film to explore some interesting character beats.  (This isn’t a film that dives too deeply into any characters, which is the film’s main weakness, but the post-Vietnam setting is effectively used as a shorthand to help create a bunch of interesting characters even though the film doesn’t really take the time to explore most of them.)

Mr. Vogt-Roberts’ film is gorgeous.  There are some extraordinary visual effects, no surprise.  Kong himself is magnificently realized.  From the trailers, I was uncertain by the decision to make Kong so enormous, but it works in the film.  This behemoth-sized Kong has quite a different feel from Peter Jackson’s 2005 film.  But in this film’s entirely different setting, it works.  Kong is referred to repeatedly as a god, and this mammoth Kong has that feeling.  The CGI effects that brought him to life are terrific, equally effective when we are looking into Kong’s eyes in extreme close-up or watching him throw down with enormous other hideous creatures.  Tremendous credit must go to Terry Notary, whose motion-capture work was the heart of Kong’s performance.  (Mr. Notary has been doing great work at creating characters in fantasy spectacles for many years now.  I first became familiar with his work from watching the behind-the-scenes documentaries on the DVDs of Peter Jackson’s Lord of the Rings films.)

The film includes a number of sequences of rip-roaring monster mayhem.  The intro to Kong sequence, in which he lays a fierce smack-down upon a squad of U.S. military helicopters, is spectacular.  But that’s just the beginning.  There are several show-stopping sequences in which Kong fights a variety of other monstrous denizens of Skull Island.  The climactic monster fight is a real barn-burner, though I was most taken by the mid-movie Kong vs octopus battle, which culminates in Kong slurping down a bunch of enormous tentacles.  It was great.

But unlike some big-budget CGI spectacles, what impressed me about Kong: Skull Island is that the film still feels directed.  There are all sorts of cool shots and clever edits in the film, little touches that make the film feel alive and interesting.  I love the opening credits that is structured to look like an old-style slide presentation, presenting us with a montage of images showing us the passage of time from the 1944 prologue to 1973.

The film has an enormous ensemble, and while everyone in the cast gives their all, probably the film’s biggest weakness is that it bites off more than it can chew with this huge cast of characters.  There are a lot of great actors, but some of the characters fall flat.  No one is bad, but there are a lot of characters who, as the film progressed, I felt I should be getting to know more, or care about on a deeper level.  For instance, I love Toby Kebbell (his motion capture work in another monkey movie, Dawn of the Planet of the Apes, was extraordinary), but while the idea of the note to his son was sweet, his final fate in the movie didn’t affect me at all.  More problematically, Tom Hiddleston and Brie Larson are, I think, supposed to be the two main heroic characters in the film, and yet I felt I hardly knew them at all.  Both actors are fine, and I enjoyed watching them (and I rooted for them to avoid getting eaten), but I didn’t really invest in their stories.

The best actor in the film is John C. Reilly, who absolutely steals the movie as a former U.S. pilot who has been stranded on Skull Island for almost three decades.  Mr. Reilly is absolutely hilarious, and his crazy energy brings the movie to life every moment he is on screen.  (The filmmakers clearly realized he was the best thing about the film, as the epilogue sequence that runs over the start of the closing credits completely ignores Mr. Hiddleston and Ms. Larson’s characters, focusing exclusively on Mr. Reilly.)

Samuel L. Jackson is a lot of fun as a man embittered by the U.S.’ withdrawal from Vietnam, who seizes on Kong as a new villain for him to fight.  The character is thinly written (rather than his having a true character arc, it’s clear right from the first scene that this guy is sort of unhinged), but it’s a lot of fun watching Mr. Jackson cut loose and chew the scenery.  (I am pretty sure he even says “hang on to your butts” at one point in the film!)

Of all the cannon-fodder grunts, Shea Whigham and Jason Mitchell make the best impression as the tough, loyal soldiers Cole and Mills.  Both men are great, and their performances helped us to care about those guys.

I also enjoyed John Goodman as the U.S. government agent who sets the whole story in motion.  Again, there is not much to his character.  I’d have liked to have understood this guy better — was he a noble man trying to protect the world, or a crazy person blind to the effect of his actions on others?  I have no idea; the film doesn’t let us in to his character.  But that being said, Mr. Goodman is still a heck of a lot of fun to watch, and he bites into his scenes with gusto.

With Godzilla and now Kong: Skull Island, Legendary Pictures is trying to create their own interconnected monster movie universe.  (With the incredible success of Marvel Studios, these days EVERYONE wants their own interconnected movie franchises!)  Stay in your seat until the end of the credits for a worthwhile stinger that sheds light on the direction in which these movies are going next.  (I wonder whether this film’s 1973 setting will prove to be a challenge for connecting Kong with the other monster movies.  Though, I guess if it is Kong who is the one who will be crossing over, as opposed to any of the surviving human characters, this won’t actually be a problem at all!  We’ll see…)

Let it be known that I actually quite like Peter Jackson’s 2005 version of King Kong.  That version was reverential of the original Kong, whereas this film is far more gleeful at taking Kong and putting him in all sorts of wild new situations for monster action and craziness.  These are very different approaches, but I quite enjoyed them both.  I didn’t have such high hopes for Kong: Skull Island, but I was impressed by the creative and playful way this character has been brought back to life.  This is not Great Cinema, but Kong: Skull Island was a damn entertaining film, and a lot of fun to eat popcorn to.  I’m glad to have seen it.