Skip to the content
HomeWritten PostJosh Reviews Knives Out 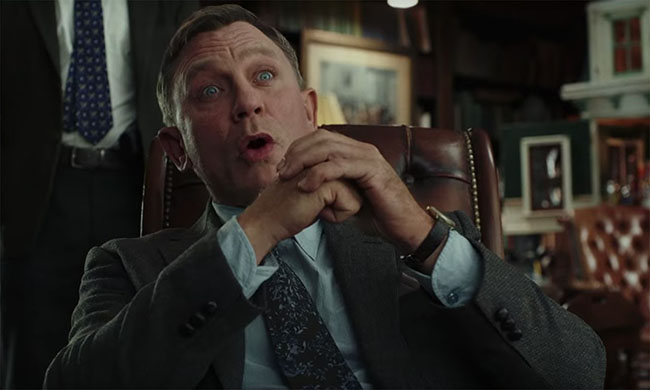 When wealthy author Harlan Thrombey (Christopher Plumer) is found dead in his home, many of his family members and others in his orbit all seem to have a possible motive.  Enter: detective Benoit Blanc (Daniel Craig), who has been hired to get to the bottom of the whole bloody affair.

Knives Out, written and directed by Rian Johnson, is a ferociously entertaining film, an agreeably funny and twisty whodunnit.

Mr. Johnson’s film is a clever modern version of an Inspector Poirot or Agatha Christie mystery, with a brilliant detective investigating a large cast of characters, each of whom might be a suspect in the crime.  The film is very much of the current day, with conversations about immigration and references to Netflix.  At the same time, it’s a murder mystery in the classic mold, one that can hold its own proudly with the classic stories of this genre.  The film is very funny, but it’s not a spoof.  There is real death, and significant stakes for the characters involved.  And yet, Mr. Johnson effectively maintains a fun, jaunty tone for the film’s entire run-time.  It’s an impressive accomplishment.

The cast is magnificent.  I don’t know what’s going on with Daniel Craig’s accent, but his surprising and unexpected choices continually delighted me throughout the film.  His detective Blanc seems in many ways to be just as loony as the characters he’s investigating; but he proves again and again his skill and attention to detail.  I love how Mr. Craig was able to make this detective character just as interesting as all of the other suspects.  Ana de Armas was dazzling in Blade Runner 2049, and she proves that was no fluke here with her empathetic work here as Harlan’s young nurse, Marta, who suddenly finds herself in an escalatingly crazy situation.

Jamie Lee Curtis is devastatingly sharp and acerbic as Harlan’s oldest daughter, Linda.  It’s a delight to see the great Ms. Curtis back on screen playing such a strong and memorable character.  I don’t think I’ve seen anything Don Johnson has done in almost 20 years, and yet here I am loving his work in HBO’s new Watchmen series, and he was terrific in this film as Linda’s husband Richard.  Chris Evans plays an anti-Steve Rogers character in Ransom, Linda and Richard’s spoiled son.  It’s fascinating to see Mr. Evans use his thousand-watt smile for such a smarmy, selfish character, rather than a noble one.  Michael Shannon’s usual intensity brings interesting colors to the role of Harlan’s youngest — and somewhat desperate — son Walt.  Toni Collette is hilarious as Joni, the ditsy widow of Harlan’s dead son Neil, who runs a fake-sounding lifestyle business that rather resembles a number of Gwyneth Paltrow’s various enterprises.

Christopher Plummer is fantastic as always as Harlan himself.  This wealthy, privileged man who has raised a family of selfish fools could easily have been hatable, but Mr. Plummer bring great dignity — as he always does — to the role, and makes us care for Harlan in just a small number of scenes.  Lakeith Stanfield is such a loony-tune as Darius in Atlanta; he’s the opposite here as the patient, competent detective assigned to investigate Harlan’s death.  The role of the professional assisting the “great detective” in these sorts of stories is usually either boring or an idiot or both; Mr. Stanfield’s charisma (and sharp writing from Rian Johnson) prevent him from falling into either trap.  Katherine Langford (13 Reasons Why) makes us care about Joni’s daughter Meg, who is one of Marta’s few actual friends within the family.  Jaeden Martell (who was so great as Bill Denbrough in It) is mostly silent throughout the film, but he hits his comedic beats perfectly, playing Jacob, the right-wing son of Walt.  Noah Segan is very funny as the overly enthusiastic Trooper Wagner.  Riki Lindhome doesn’t have too much to do as Walt’s wife Donna, but she’s funny and suitably over-the-top in the few moments she gets.  Edi Patterson (who was super-funny as Ms. Abbott in Danny McBride and Jody Hill’s series Vice Principals) plays a mostly straight role here as Harlan’s housekeeper Fran, but like the rest of the cast, she’s perfect in her scenes.

That’s not even all!  The great Frank Oz pops up and kills it in a few terrific scenes as the Thrombey family lawyer who supervises the reading of Harlan’s will.  And the also-great M. Emmett Walsh (a wonderful character actor who has appeared in so many fantastic films, including The Jerk, Blade Runner, Blood Simple, and Fletch) is a delight to see in his one scene as the elderly gentleman working the security video monitors on Harlan’s estate.

Rian Johnson’s intricate script is filled with twists and turns.  The story kept me guessing, while also satisfying me with a conclusion that made sense and felt right.  I was pleased by how many clever hints and set-ups were included in the film’s early-going that were beautifully paid off by the time the credits rolled.  (Most especially the bit about the prop you-know-what!)

I had a ball watching Knives Out.  I have enjoyed many of Rian Johnson’s previous films (I liked the twisty sci-fi caper Looper… and I remain a staunch defender of The Last Jedi, despite its flaws), but Knives Out might just be my new favorite.