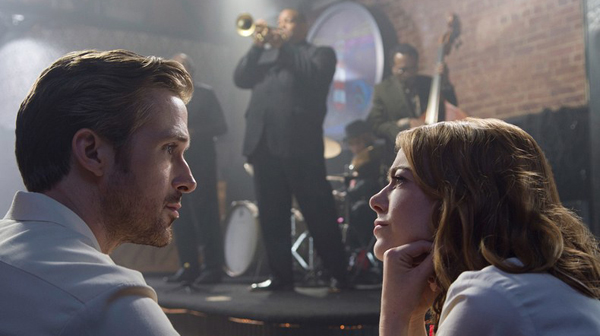 In La La Land, Damien Chazelle’s follow-up to his marvelous and intense film Whiplash, Emma Stone and Ryan Gosling star as two young artists struggling to make it in Los Angeles. Ms. Stone plays Mia, a struggling actress working as a barista, while Mr Gosling plays Sebastian, a jazz musician who, soon after we meet him, gets fired from his demeaning (at least that’s how he views it) job playing popular ditties on piano at a restaurant. Mia and Sebastian’s first two interactions don’t go well, but when they meet for a third time, something sparks.

La La Land is a musical, a rare thing in cinema these days.  A musical is certainly a retro style of film, and Mr. Chazelle leans into that, with aspects of the film such as the opening credits and the closing “the end” title card having the look and feel of Hollywood films from days gone by.  I loved those touches, they work together to help set a tone for this film as something different, something set apart in style from so many of the other movies crowding our multiplexes these days.

The film also has an earnestness that feels retro in this modern cynical age.  This is a film that wears its heart on its sleeve.  Some might find that corny, but I found it to be enormously appealing.  Ms. Stone and Mr. Gosling are able to sell the film’s big emotional beats completely, drawing the audience into their story.

The music in La La Land is great. Right away from the joyous opening number I was captured by the film’s effervescent tone, not to mention the extraordinary film-making skill on display as that complicated opening number, set in the midst of an L.A. traffic jam, appears to unfold in one unbroken take.  That was impressive!

But La La Land works because, even if you were to take all of the wonderful musical sequences out of the movie, you would still be left with a compelling story. Ms. Stone and Mr. Gosling’s shared chemistry and movie-star wattage make you care about these two characters and their relationship. But more than that, I was taken by the film’s meditations on creative struggles, the hardship of the quest for artistic success, and the heart-rending soul-searching that must be done when one has to weigh giving up on one’s artistic dreams for a chance at more attainable every-day goals. Anyone who has ever tried to make art surely knows these struggles. I was captivated by the way in which Mr. Chazelle explored these issues on-screen.

Although I like them both individually, I was not that interested in Ms. Stone and Mr. Gosling’s prior two on-screen pairings. I’d heard great things about Crazy Stupid Love and at first I was excited to see it, but twenty minutes in I threw in the towel (something I almost never do). I was bored and felt I knew exactly how the rest of the movie was going to unfold. And I skipped Gangster Squad altogether, from the trailers I suspected it wouldn’t interest me. But as I just commented, I really like both Mr. Gosling and Ms. Stone as actors individually.  Mr. Gosling blew me away in 2001’s True Believer (a riveting film in which a lost Jewish young man becomes a Neo-Nazi) and he’s done great work in films such as Drive, The Ides of March, The Place Beyond the Pines, The Big Short, and this year’s tremendous (and under-seen and under-loved) The Nice Guys.  Meanwhile, Ms. Stone was instantly impressive back in 2007’s Superbad, and I’ve enjoyed her work in Easy A, The Help, The Amazing Spider-Man (she was pretty much the only really great thing about that failed Spidey reboot), and Birdman. It was exciting to finally get to see, in this film, what all the fuss over their chemistry was about. The two truly do light up the screen together.  This film works because of their powerful charisma.

That chemistry makes the films ending even more powerful! This film does not end the way I expected it to. That gave me pause for a minute when I first walked out of the theatre, but upon some consideration, I have found that I love the ending. The montage that unfolds as Sebastian plays that final piano solo is an emotional punch in the gut, and I love that Mr. Chazelle took his film in that unexpected (by me, at least) direction rather than opting for a more simplistic happy ending.

John Legend is terrific in a supporting role as Sebastian’s friend, Keith, who has started a jazz band that is successful but very different from the type of jazz that Sebastian holds dear.  Keith expresses one of the film’s thematic points-of-view, asking “how are you going to be a revolutionary if you’re such a traditionalist?”  I’m not sure the film quite agrees with Keith’s position (it’s debatable as to whether, in the end, you feel that Sebastian has made the right choices), but even if you personally disagree with Keith (and/or you feel that, in the end, the film does), it’s a strong point-of-view and a worthy concept for consideration.  Personally, I do agree with Keith and so I enjoyed this aspect of the film’s story, and was intrigued by the way that Mr. Chazelle’s film put me at odds with one of the film’s two lead protagonists at that moment.

I’m writing about La La Land after weeks of seeing it top critics’ “Best of the Year” lists (such as Entertainment Weekly’s list), which puts me in an interesting place.  I quite enjoyed this film, though I wouldn’t say it was anywhere approaching my favorite film of the year.  (I’m still working on finalizing my own “Best Movies of 2016” list, which I will post on the site starting next week, and while I think La La Land might make an appearance, it won’t be towards the top.)  On the other side of the coin, I’ve started to read about a backlash against the film.  MTV’s Amy Nicholson eviscerated the film in her review, and while I think Ms. Nicholson is a great film critic (I loved and miss her podcast The Cannon with Devin Faraci), I must say I don’t agree with this point of view either.  While I respect the opinion of anyone who says they’re just not interested in a film about the problems of two pretty white people in L.A., I found the story to be engaging and compelling.  I can also understand anyone who takes issue with the idea of a white person (Sebastian) taking it upon himself to lecture a black person (Keith) about jazz, though to me I just didn’t find their color relevant.  These are two characters, friends, expressing a different point of view.  I enjoyed both characters and both performances in the film, and their color frankly never crossed my mind.  I respect the viewpoint of anyone who feels different, but I don’t feel this is a cardinal sin that undermines everything else that is enjoyable about the movie.

For me, while I wouldn’t say that La La Land is an all-in-caps GREAT film, it is one that I found lovely and enjoyable.  It’s a fun, light film that is able to nonetheless wrestle with some complicated issues of artistic expression, the pursuit of one’s dreams, and the pull of compromise.  The music is great and the lead performances are terrific.  Once again, Damien Chazelle (only 31 years old!!) has crafted a winner.  I walked away from La La Land very happy.