Skip to the content
HomeWritten PostJosh Reviews Manchester By The Sea 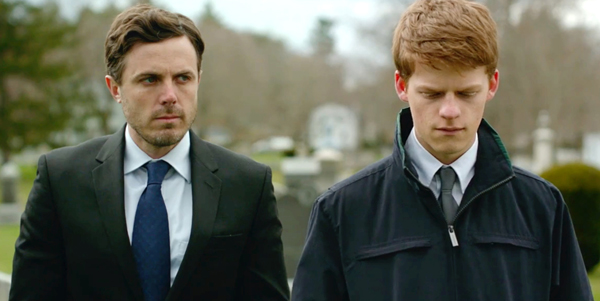 Josh Reviews Manchester By The Sea

Casey and Ben Affleck both earned my approbation forever with 2007’s Gone Baby Gone, a magnificent and heartbreaking piece of work.  That film was Ben Affleck’s directorial debut and Casey played the lead role.  If you haven’t seen it, go see it right now.  I’ve been waiting ever since for either Affleck brother to be able to top their incredible work in that film.  (Both have come close once or twice over the years, Ben with Argo and Casey with The Assassination of Jesse James by the Coward Robert Ford.)  A decade later, Casey Affleck might have finally done it with his extraordinary work in the wrenching and deeply moving Manchester By the Sea.

In Kenneth Lonergan’s film, Casey Affleck plays Lee Chandler.  When we first meet Lee in the film, he is working as a janitor on the South Shore (Quincy, MA), living a lonely life consisting of brief, mostly-terse interactions with his building’s tenants and picking bar fights.  Then a call summons Lee back to his home on the North Shore, as his brother Joe (Kyle Chandler) has died of a heart attack.

I’d thought the early death of Lee’s brother would be the central tragedy of the film, but no, that’s not really what the film is about at all.  Although the film takes its time in telling us why Lee is known around town as “that” Lee Chandler, we do eventually learn the heartbreaking details of what has turned Lee into such an empty shell of a person.  It is this that is the defining event of the film, and the reason for telling this story.

Casey Affleck is simply remarkable in the role.  He commands the audience’s attention in every moment that he is on-screen (which is almost the entirety of the film’s 137-minute run-time).  As always, Mr. Affleck eschews movie-star histrionics, instead bringing Lee to life through a series of tiny, quiet moments and his gentle, almost mumbling line-delivery.  With every small action or inaction, with his posture and the look in his eyes, Mr. Affleck fully inhabits this deeply broken man.  My favorite moment in the entire film is the quiet scene in which we see Lee stuffing his clothes in a bag and then, almost reverently, carefully wrapping the three objects (I won’t tell you what they are) he picks up off the top of his chest of drawers.  That’s the whole movie right there.

I knew going in that this would be a somber movie and I was fearful that a two-and-a-half movie about grief, however well-crafted, would be a chore.  But the genius of Kenneth Lonergan’s film is how alive it is.  After two-and-a-half hours, when the credits rolled, I couldn’t believe it.  I would have gladly spent another two-and-a-half-hours continuing to explore these wonderful characters.  Aditionally, the film has a surprising amount of humor in it, humor that comes from fully-realized, three-dimensional characters breathing and interacting with one another.

Beyond Casey Affleck’s Lee, the film presents us with a rich canvas of life in this town on Boston’s North Shore.  These are real people of the like that you seldom see captured on film.  Mr. Lonergan isn’t interested in big Hollywood moments.  In ninety-nine other versions of this same movie, this story would be about how Lee’s interactions with Joe’s 16 year-old son Patrick, now orphaned, would help him find his way back to the land of the living.  But that is not the movie that Kenneth Lonergan made.  He told a more honest, more human, more heartbreaking story.  Some people are damaged beyond repair.  Some people cannot be saved.  I didn’t realize it at the time, but the scene in the kitchen in which a character says “I can’t beat this” was the emotional heart, and climax, of the story.  This is an incredible piece of work.

Lucas Hedges plays young Patrick, and Mr. Hedges is phenomenal in the role.  He is incredibly naturalistic — I never doubted for an instance the reality of his portrayal.  The character is wonderfully written — Patrick is a kid who is not afraid to take the piss out of his uncle Lee.  I love the time the film spends with Patrick, with his hockey team and his band and his two girlfriends.  The scene in which Patrick is able — after many failed attempts — to sleep with Sandy (Anna Barishnykov) — feels like it would have been ignored by many filmmakers (seeing it as an irrelevant distraction from Lee’s story) or made into a BIG DRAMATIC MOMENT by most others.  Instead, Mr. Lonergan presents the scene almost casually, just one moment in the canvas of Patrick’s life.  It’s a brilliant choice.

The ensemble surrounding Casey Affleck and Lucas Hedges is wonderful.  Kyle Chandler is perfect as Joe, allowing us to see him as both the idealized big brother and also as a flawed, real human being in his own right.  I’ve never seen C.J. Wilson before, but he makes a huge impact as George, the big man who was with Joe when he died and who helps Patrick with their boat.  Gretchen Mol and Matthew Broderick kill in their scene together, playing the couple who Patrick, for a brief moment, thinks might be the solution to all of his problems.  Heather Burns (Bored to Death) is wonderful in a few scenes as Sandy’s mom, one of the few people in town to make any attempt to reach out to Lee.  Moonrise Kingdom‘s Sara Heyward is solid as Patrick’s other girlfriend, Silvie.  Then there is Michelle Williams, who is heartbreaking as Randi, Lee’s ex-wife.  She’s on the movie’s poster, and for much of the movie I wondered why, since she’s not in that many scenes.  By the end of the movie, I understood.

Manchester by the Sea is a triumph.  I found it to be deeply moving.  It’s a haunting portrait of grief, but don’t let that heavy-sounding subject-matter keep you away.  Kenneth Lonergan’s film is about people.  Real people, some bent and some broken, but people who are living their lives and trying as best they can to find their way through to another day.  The film is funny and it is sad.  I thought it was terrific.