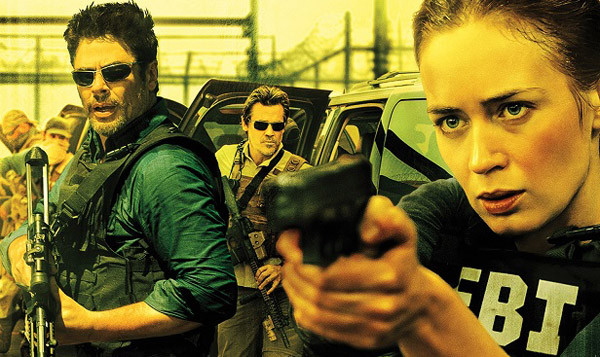 As Sicario opens, FBI agent Kate Macer (Emily Blunt) and her partner Reggie Wayne (Daniel Kaluuya) raid a house in Arizona looking for kidnapping victims, only to discover that hidden inside the walls of the house are the gruesome remains of dozens of dead victims of the drug cartels.  Kate agrees to be reassigned to a team of men hunting the cartels, despite the shadowy nature of some of the men involved, including Matt (Josh Brolin), who Kate suspects is a CIA agent, and Alejandro (Benicio del Toro) a man who seems to have inside knowledge of the cartels.  Kate is taken off-guard that the team’s first mission takes them outside the U.S. and to Juarez, Mexico to extradite a prisoner.  On the way out, they find themselves in a violent shootout with cartel men in the middle of a crowded bridge.  Kate has found herself suddenly surrounded in a world of terrible violence and increasingly murky morality, as the actions of Matt and Alejandro and their team seem to be of questionable legality at best.  To what end will she allow herself to go in pursuit of the cartel head-honchos?  Just what sorts of means will justify their ends?

Sicario is a tense thrilled that had me quite on the edge of my seat for much of its run-time.  I like the way the film throws the audience into the story, not giving us (or Kate, our main character) much chance to catch our breath or to get our bearings.  I enjoyed the murky moral questions that the film, written by Taylor Sheridan and directed by Denis Villeneuve, raises.

But I didn’t quite love the film the way so many other reviewers seemed to.  Throughout the film I found myself repeatedly scratching my head as to why Matt (Josh Brolin) behaves like such a dick to Kate, and why she tolerates that behavior.  Sicario is a film whose story only really works if you accept the notion that Matt will withhold key information from Kate until late in the third act, and that Kate will continue to go along with what’s happening without insisting on someone giving her a straight answer.  Part of my brain can accept this, thinking that people go along with all sorts of things when they want to fit in and look like a good, agreeable person to their bosses in an effort to get ahead.  I can see this being even more of an issue in Kate’s case, a woman who, despite the film showing us her smarts and competence, is nonetheless the lone woman among all these alpha dog males.  On the other hand, the other part of my brain recognizes the withholding of that key information as a writerly device to build the viewer’s suspense and to allow the film to give us a bunch of late-in-the-story revelations.

Emily Blunt is, as always, fantastic.  Ms. Blunt seems to be able to do no wrong, and she has killed in film after film over the past several years.  She’s come a long way from her tiny role in Charlie Wilson’s War, a role designed to show off her enormous physical beauty and not much else.  But Ms. Blunt has proven herself to be hugely capable in comedies (The Five-Year Engagement), dramas (Your Sister’s Sister) and tough action movies (Looper and Edge of Tomorrow).  She is tremendous here in Sicario as well, showing us Kate’s toughness as well as her very human fears and flaws.

Daniel Kaluuya made a huge impression on me in the one episode of Black Mirror in which he appeared, and so I was thrilled to see him here.  He has a small role, but he really brings it to life with his very specific energy and way of speaking.  I loved this character, and I enjoyed the way that he and Ms. Blunt were able to convey the close bond between the two characters.

Josh Brolin is fun as always.  Man he is good at playing a total jerk!  Mr. Brolin has elevated this to an art form.

But the film really belongs to Benicio del Toro.  By the end of the movie I’d decided that Sicario was even more Alejandro’s story than it was Kate’s.  Mr. del Toro is tremendous in every moment he’s on-screen.  His glowering, mysterious presence is hugely intriguing for the viewer, as we struggle to pay attention to his every movement and line of dialogue, trying to figure out this character’s story.  I love Mr. del Toro’s gentle, often-whispering line-delivery.  This makes him far more intriguing and dangerous than one who is bombastic.  Mr. del Toro has some particularly amazing scenes in the film’s third act, as Alejandro’s hidden past begins to come to light.

I wanted to like Sicario but despite the incredibly strong performances of all of its lead actors I found the film wearyingly down-beat.  I suppose the film’s downer nature is the point it’s trying to make in regards to the pointlessness of the U.S.’s war on drugs.  But something about this film just didn’t quite work for me.  I respect its ambition and I applaud Denis Villeneuve’s masterful ability to build tension.  The extraction mission to Juarez in the middle of the film is a master-stroke in filmmaking, as the suspense builds and builds and builds until we finally arrive at the shootout on the bridge.  And Roger Deakins photography is genius and gorgeous, most notably in the crazy night-time raid at the end of the film.  (Though any night-vision action sequence these days will find itself on the losing end of a comparison to the climax of Zero Dark Thirty.)  But Sicario is dour and humorless from start-to-finish, and as such it didn’t ignite much interest from this particular viewer.