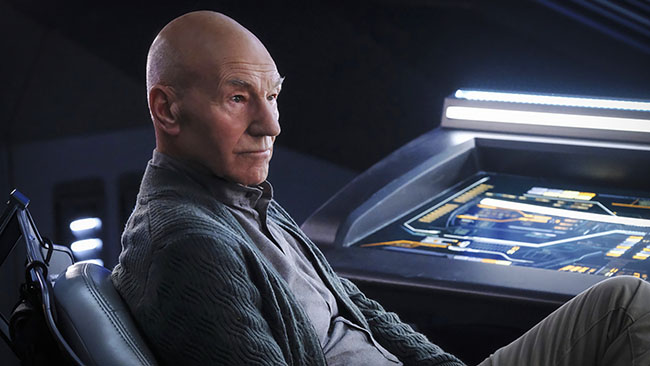 I quite enjoyed the premiere episode of Star Trek: Picard.

Unfortunately, the next two episodes (“Maps and Legends” and “The End is the Beginning”) were rather disappointing.  The same thing happened with Star Trek: Discovery — I really enjoyed the premiere and then things immediately took a downward turn.  I’m hoping Picard can rally.

I have two main problems so far.  First, almost nothing significant has happened in these last two episodes.  Picard at the end of episode three is in basically the exact same place he was at the end of the premiere: ready to leave Earth in an attempt to find and protect Dash’s twin sister.  Yes, we’ve met a few new characters (Raffi, Rios), but basically it’s been two episodes of narrative wheel-spinning.  That’s a LOT of wasted time in an eight-episode season.

More problematically, I’ve seen what to me feels like the exact same sort of lazy, muddled storytelling that so often beset Discovery.  What do I mean?  Here are a few examples:

* Why are the Romulan bad guys having trouble finding Soji when she is WORKING AT A ROMULAN FACILITY??

* We have all sorts The Force Awakens type of problems with the show being unnecessarily muddled with regards to the status quo of the universe and the characters.  Why is the secretive, paranoid, militaristic Romulan empire allowing Federation civilians to operate inside their salvaged Borg cube?  Wouldn’t they keep that technology to themselves?  What in fact is the status of the Romulan empire following the destruction of Romulus?  Does the Romulan empire even still exist?  Who are the Romulan bad-guys and what are they after?  Why do they hate Synthetics?  Have the Romulan bad guys infiltrated Starfleet or are they working with Starfleet?  (I have grown very weary already of the mustache- twirling Commodore Oh and her EVIL Romulan side-kick.)  (Also, do the writers know what a Commodore is?  That rank doesn’t make sense to me for the head of Starfleet Security.)  It’d be helpful to have some clarity on these story-points; I’d enjoy the stories more if I better understood what was going on and who wanted what.

* The idea of another Romulan secret organization hidden inside the Tal Shiar (a Romulan secret organization) seems silly and unnecessary to me.  (And the idea that they have hated Synthetics for “thousands” of years seems like a mistake to me.  “Thousands” sounds cool, but really that should have been “hundreds” of years, right?  The Romulan are at about the same level of technology as the Federation, so does it make sense they’d have had Synthetics on their world to hate and fear THOUSANDS of years ago?  On the other hand, the Romulan did have interstellar flight capacity thousands of years earlier, when they split from Vulcan back in their pre-history…)

* I don’t understand how or why the Federation would have Data-like “Synths” working as a labor force, when the whole point of the ending of TNG’s classic “Measure of a Man” was to prevent exactly that from happening — an army of slave Datas.  Here again, I need the show to better explain how/why that new status quo came to pass.  (I am willing to accept a less than perfect Federation.  Maybe they turned to these robot slaves to help rebuild after the Dominion War, and people were willing to set aside their principles in favor of expediency?  I could go with that!  But I need the show to take the time to explain this sort of thing, and to demonstrate that the writers have thought these issues through as opposed to just doing it because they thought it was cool, which is what it feels like to me.)

* I really disliked Laris’ magic scanner beam, from episode two, that could recreate a near-perfect holographic recreation of the movements of Dahj and her boyfriend from days earlier.  I am all for advanced Star Trek tech — and there IS a lot of cool future-tech in Picard that I liked a lot (such as the holographic communicator that Soji uses to speak to her “mother”) — but this didn’t seem to me to have any sort of actual scientific plausibility to it.

* So, let me see if I have this straight: Raffi is pissed at Picard NOT because he ran away from Starfleet and thus abandoned millions of Romulans to death, but instead because once Picard resigned from Starfleet, she was fired too?  That seems so petty!!

* There is no satisfying story reason for Picard not to go to his old friends Riker, Geordi, Worf, etc., to help with this mission.  He only wants to put strangers’ lives in jeopardy?  If Picard is so desperate to find and protect Dahj’s sister as he seems, then of course he should be going straight to his old friends for help.  The idea that Picard doesn’t have a single friend or ally left anywhere in Starfleet (even characters we didn’t know from TNG) is ludicrous to me.

* If Zhaban and Laris are in Picard’s debt, why don’t they go with him on this dangerous mission?  Why is staying to harvest grapes on Earth more important to them?

* I HATED Picard’s comment in episode three that he doesn’t like science fiction.  Ugh.  Could this show be any more self-hating?  I have often gotten the feeling watching Discovery and now Picard that the makers of these shows are running away from the Star Trek legacy; like they’re embarrassed by that.  To have the hero of this show diss the type of fiction that most of the people watching this show probably love is so insulting!!  And it makes Picard look terribly small-minded that he doesn’t like the work of Isaac Asimov, arguably the greatest sci-fi author of all time.

* I liked the flashbacks that opened these two episodes to the events of the Synth attack on Mars and the repercussions thereof.  I hope the series continues to flesh out these events to answer my many questions satisfactorily.

* I liked that the series is willing to be a little sexier than Trek usually is (see: Soji and Narek getting dressed following some nookie in episode two) and also a little harsher (see: Admiral Clancy’s dropping an f-bomb on Picard, a first for Trek).

* I loved the look of the scenes in Starfleet Headquarters.  I liked Picard’s arrowhead temporary visitors’ badge.  I loved the holographic Enterprises floating overhead.  (Though if Picard is so much on the outs with Starfleet, why is the Enterprise D so proudly displayed in the lobby of Starfleet HQ?)

* I liked seeing David Paymer as a friend of Picard’s from the Stargazer.  I loved the tie-in to the TNG series finale “All Good Things” with the revelation that Picard is afflicted with the beginnings of a neurological disease.  (In that episode, future-Picard was suffering from Irumodic Syndrome.)

* I loved seeing Hugh again.  (Though the episode strangely underplays his return!  He could easily be mistaken for a brand new character.)  Jonathan Del Arco is terrific as this older, more grizzled Hugh.  It’s awesome that Hugh is working on helping rehabilitate former Borg drones.  That makes perfect sense.

* I quite like all of the new characters so far.  Raffi’s backstory doesn’t make sense, as I mentioned above, but this tough woman seems like a great addition.  (It’s cool that she lives in Vasquez Rocks.  Is this the first time that iconic setting has been used as itself on Star Trek??)  And I enjoyed meeting Captain Rios in episode three.  I love that his EMH looks exactly like himself.  (Though what a missed opportunity for a Robert Picardo cameo!!)

* Of course it gave me a thrill to hear Patrick Stewart as Jean-Luc Picard say “Engage!” at the end of episode three, to the accompaniment of the Star Trek fanfare.

I’m still watching Picard; I haven’t given up.  The ingredients of a great show are here.  And Patrick Stewart is amazing as always.  But I need the writing to be better/smarter.  Here’s hoping things pick up now that Picard has FINALLY left Earth and set off on his adventure…