Skip to the content
HomeWritten PostJosh Reviews the Animated Batman: Gotham by Gaslight 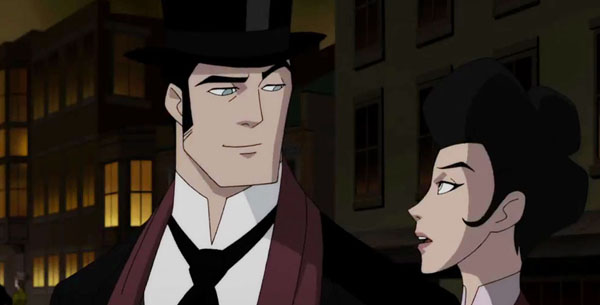 Batman: Gotham by Gaslight is an adaptation of the wonderful Gotham by Gaslight graphic novel from 1989 (written by Brian Augustyn and illustrated by Mike Mignola and P. Craig Russell).  The story is set in a Victorian Era version of Gotham City, in which the vigilante Batman attempts to find and stop the serial killer Jack, who is murdering women across the city.

Batman versus Jack the Ripper is a fantastic idea, and both the original graphic novel and this new animated adaptation really sink their teeth into this deliciously juicy concept.  There’s a reason the original graphic novel is so beloved.  It was the first of what DC would later call “Elseworlds” stories, in which the familiar DC characters were transposed into alternate settings.  Brian Augustyn wrote a great story, and the artwork by comics luminaries Mike Mignola and P. Craig Russell is fantastic.

I quite enjoyed the animated adaptation!  This is one of the best DC animated films in years!  This film feels like a return to what this series of direct-to-DVD/blu-ray animated films was originally designed to be: stand-alone adaptations of famous stories from across the years of DC Comics.  Gotham by Gaslight was a great choice to be adapted — it’s a great story with a lot of potential to be expanded and brought to life via animation.

And expand it they have.  The original story is a fairly short tale, and I was pleased with how the concept was expanded upon in this film.  I enjoyed how the film allowed us to see Victorian versions of many more characters from the Batman supporting cast (hero and villain) than we saw in the original graphic novel.  I was especially pleased by the larger role given to Selina Kyle.  I was surprised, at first, that this animated adaptation changed the identity of the villain from who he was in the original story, but this new version worked great.  (And the film takes the time to successfully develop a number of red herrings, so that the final revelation was actually a surprise to me.)

The animation is solid if not spectacular, consistent with the past several years of these DC animated films.  Where the film shines is in the character designs, which are a lovely blend of the Mignola/Russell artwork from the original graphic novel and the style that Bruce Timm pioneered for the DC animated adventures back with Batman: The Animated Series.  For the past several years, many of these DC animated films have had terribly bulky, ugly and awkward character designs, but I loved the look of the designs in this film.  And the general animation was solid.  These designs animated well.  There were some CGI elements that stuck out somewhat obviously from the rest of the animation (such as the blimp) — this reminded me of the DC animation from decades ago (when, for example, the CGI batwing in Heart of Ice stuck out obviously from the rest of the animation).  I was sort of surprised to see this in a modern film, but it actually gave the film’s animation a somewhat “nostalgic” feel for me which I did not object to, and everything worked well enough that I didn’t mind too much.

As always for these DC films, the voice cast is terrific.  I loved Bruce Greenwood (Thirteen Days, The Post, and he played Christopher Pike in J.J. Abrams’ Star Trek) as Bruce Wayne/Batman.  Mr. Greenwood actually has played Bruce/Batman once before in an animated DC film: 2010’s Batman: Under the Red Hood, which is, I think, my absolute favorite of this run of direct-to-DVD/blu-ray animated films.  Mr. Greenwood is absolutely perfect in the role, and I am thrilled to see him back playing the character again.  He is a terrific actor, and his gravelly voice is perfect for Bruce/Batman.  He has the toughness the role needs, with just the right shade of warmth.  He’s great.

As I noted above, I enjoyed that Selina Kyle had such a large role in this film, and Jennifer Carpenter was great in the role, giving Selina the confidence she needs without sacrificing any femininity.  The rest of the cast was equally great: Scott Patterson as Gordon, Anthony Head as Alfred, John DiMaggio (Bender from Futurama!) as Bullock, Grey Griffin as Sister Leslie, and plenty more — each one of these actors was note-perfect in the role.

I enjoyed the story!  It was adult without feeling gratuitous or juvenile.  (Well, OK, the Poison Ivy strip-tease in the beginning was a little gratuitous.)  There were a number of compelling and well fleshed-out characters.  The mystery at the heart of the story was well-executed, keeping me guessing, and elements of that final confrontation with Jack and one of his victims were suitably horrifying.  Everything came together in an effective manner.

The film was rated R, which surprised me.  Both that DC/Warner Brothers was willing too release an R-rated Batman animated film (though several of the recent animated films have been R rated), and also that this film got that rating, as I’m not sure what in the film necessitated the R.  The subject matter of a woman-murdering serial killer is pretty gruesome, I guess.  And they do show a lot of blood when we see the first few murders.  (Blood that wasn’t necessary, I might add — the film might have been more effective had they shown a mite less in those scenes.)  But still, this isn’t Akira.  This is a pretty tame R.  (This is fine with me, by the way.  I don’t object to an R-rated super-hero story, but I often think these stories work better when they are a little more coy, a little more clever, with the adult aspects of the content.)

I also quite liked the score!  Shirley Walker’s music for Batman: The Animated Series was amazing, but I have found that most of these recent DC animated films have had rather boring, paint-by-numbers scores.  But Frederik Wiedmann’s score for this film was great.

For the first time in a while, I am happy to be able to unabashedly recommend a new DC animated film!  This was well-done from top-to-bottom.  It doesn’t come near to matching the high-points of Bruce Timm’s original DC animated shows (or the animated movies Batman: Mask of the Phantasm and Batman Beyond: Return of the Joker — and let’s be sure to give full credit to writer Paul Dini for his involvement in both of those movies and so many of the best of those early DC animated shows), but Batman: Gotham by Gaslight is a solidly entertaining watch.  I enjoyed it quite a bit.