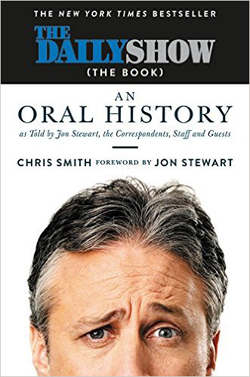 It would be difficult to overstate my love for Jon Stewart’s The Daily Show.  Week in and week out, for years, I turned to Jon Stewart and The Daily Show for edification and humor.  (It’s no coincidence that I continually kept putting The Daily Show atop my annual lists of the best television of the year.)  My first thought after most major news stories became: I can’t wait to see what Jon Stewart is going to do with this.  I know I’m not alone in that.  Mr. Stewart’s show was one of the most important television shows of the past several decades.  I don’t think I am exaggerating to state that not only did it shape the comedy world, but that it also helped shape our political discourse.  (There were plenty of times when I wish that Mr. Stewart’s point of view had been MORE impactful on the American political situation, but that says more about the sad state of our politics than it does about Mr. Stewart and his program.)

Chris Smith’s The Daily Show (The Book) is an extraordinary retelling of the history of The Daily Show.  The book begins with a prologue recap of The Daily Show’s conception and launch on Comedy Central, with Craig Kilborn as host and Lizz Winstead at the helm.  But then Mr. Kilborn signed with CBS, and the book picks up the story on page one with the courting and eventual hiring of Jon Stewart.  (Jon: “At the time, I was obviously making my mark in such films as Wishful Thinking and Dancing with Architecture, or Dancing About…  Oh, no.  They ended up calling it something else.  Playing by Heart, I think it was.”)  The book then meticulously charts Mr. Stewart’s subsequent eighteen years as host of The Daily Show.

The book is told in an oral history format.  So rather than Mr. Smith’s summarizing his interviews in his own words, the book presents the commentary and recollections of everyone he spoke to in their own words, with only the very occasional piece of narrative connective tissue inserted to give some context to what is being discussed.  This format works spectacularly well.  Mr. Smith has done an extraordinary job, collecting new interviews with a staggering array of the men and women involved with The Daily Show over the years in all capacities.  We hear from literally every single person you would want to hear from in a project like this.  We hear from the correspondents, we hear from various guests, we hear from the writers and production staff, we hear from the leadership of Comedy Central, and on and on.  And, most importantly, at every point in the story, we hear from Jon Stewart himself.  I cannot imagine how many hours Mr. Smith must have spent with Mr. Stewart alone, in order to get these in-depth recollections from him, not to mention the countless hours it must have taken to collect all the other interviews used in the book.  The Daily Show (The Book) is stunningly comprehensive.

Reading the book, I tried to identify when I started watching The Daily Show, and I believe it was around the time of the 2000 election fight.  This book is an incredible trip down memory lane, as Mr. Smith puts together his in-depth history of the show.  No major moment in the show’s history is missed.  This book covers the 2000 recount, the Iraq War (dubbed “Mess O’Potamia” by the show), Mr. Stewart’s appearance on Crossfire with Paul Begala and Tucker Carlson, the “Clusterf@#k to the White House” 2008 campaign, the show’s 2009 evisceration of Jim Cramer, the Rally to Restore Sanity, John Oliver’s stint as substitute host, and so much more.

There are so many moments recounted in the book that I remember so clearly.  Jon’s monologue on the show’s first episode back following 9/11.  The 2003 “Bush v. Bush” debate, in which the Daily Show used clips of candidate George W. Bush contradicting President George W. Bush to have the two men debating one another, moderated by Mr. Stewart.  Jon’s hilarious take-down of Anthony Weiner.  Puppet Michael Steele.  Gitmo.  That whole bit about how Donald Trump eats pizza.  It’s great fun re-living those moments, and the book is great at presenting generous transcripts from The Daily Show itself, so you can relive and laugh again at those classic bits.  But more than that, the pleasure of reading The Daily Show (The Book) isn’t just in reliving those moments, but in then reading the fascinating commentary that Mr. Smith has assembled, to learn about how those moments came to be, and also about Mr. Stewart and the Daily Show team’s reactions to and reflections on those moments.

The book does not avoid covering tense moments in The Daily Show’s history.  We read in great detail about the struggles among the Daily Show staff in the early years, as Jon Stewart reshaped the show (over the objections of some).  We read about conflicts with politicians over the content of the show, and moments in which former friends of the show became, well, not so much (such as when Mr. Stewart broke with John McCain over the Iraq war).  We read about both sides of Mr. Stewart’s schism with Wyatt Cenac late in the show’s run.  We read about certain correspondents who didn’t last long on the show.  And lots more.

But while I respect Mr. Smith for not whittling away all the sharp edges and stories of conflicts that went in to creating this television show over the course of eighteen years, what’s great about The Daily Show (The Book), is that, as a whole, these stories being told serve to elevate, not diminish, Mr. Stewart and the hundreds of talented men and women who worked so hard, over the course of two decades, to create this incredible show.  Reading this book only makes me respect and admire Mr. Stewart and his team even more.

It also makes me miss the Jon Stewart Daily Show even more than I already did.  No disrespect to Trevor Noah and the talented people working on the current iteration of The Daily Show, but reading this book made it even more painful than it already was not to have Jon Stewart to turn to, every night, to make sense of the crazy things happening in Washington, and around the world, every day.  Sigh.

For fans of The Daily Show, this book is a must-read.  Bravo to Chris Smith for assembling such an in-depth, carefully assembled history of this remarkable television program.