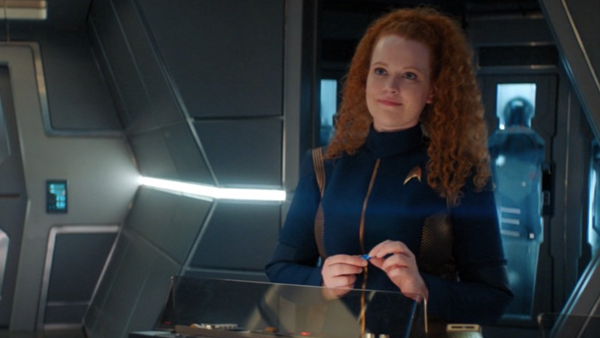 In the next few months, before the launch of Star Trek: Discovery season two, we’re going to get four new “Short Treks,” Star Trek short films.  I love this idea.  The people currently running CBS and Trek these days have made a number of statements to the press about how they want to have lots of Trek on CBS All Access, with multiple different projects in the planning stages.  My hope is that the next few years will see a lot of experimentation in terms of the type of Star Trek product we’ll get.  Rather than just one Star Trek show running for seven seasons, I’d love to see a mix of mini-series, TV movies, short films, and longer-running continuing series.  This would allow for the telling of all sorts of different styles of Star Trek shows, ideally spotlighting a rich variety of different Star Trek characters from across the previous series and eras, as well as the introduction of new characters and settings.  This would be very exciting for me as a Star Trek fan.  And so I was pleased by the announcement of these four short films, a dipping of the toe into the waters of possibilities for this franchise.

This first “Short Trek,” entitled “Runaways,” focuses on Cadet Tilly (Mary Wiseman).  Following a somewhat tense/awkward conversation with her overbearing mother, Tilly stumbles across an alien stowaway aboard the Discovery.  This alien turns out to be a young woman, who has run away from home for reasons that we will discover.  She and Tilly are able to forge an unexpected bond.

I thought “Runaways” was pretty great.  Running less than 15 minutes, “Runaways” tells a compact little story that is very satisfying.  It has a number of fun moments and interesting character beats for both Tilly and the new alien.

I enjoyed the spotlight on Tilly.  I wasn’t wild about this character when she was first introduced on Discovery, but she very quickly grew on me.  (Some day I will rewatch Discovery’s very uneven first season, and I’ll be interested to see if I think more highly of Tilly’s portrayal in those early episodes, now that I know the character better… or if I still feel that it took the show a few episodes to find this character.)  I loved seeing Tilly’s mom here in “Runaways.”  That one conversation sheds a world of light on who Tilly is and where she came from.  And Tilly’s adventure with the young alien woman gives a wonderfully efficient spotlight on everything that is interesting and unique about this character.

The young alien was also great.  Played wonderfully by Yadira Guevara-Prip, she has a great look (terrific makeup and prosthetic effects that create an interesting new-to-Trek alien species) and character arc.  We get to see her transform, through Tilly’s eyes, from a scary alien into a young woman very similar to Tilly in many ways.  I’d love to see this character again.

The short looks great.  It’s clearly made utilizing only Discovery’s standing sets, but that’s OK, as the sets all look great.  And the short opens with a beautiful visual effects shot of the Discovery in space.

I also enjoyed the new, cinematic-looking 2:1 widescreen aspect ration utilized by this short, which will apparently by used by Discovery moving forward!  This is an even more widescreen look that the 2.35:1 look of Discovery’s first season.  I love this choice.  Read more here.

As usual for Discovery, the show plays fast and loose with established Trek canon.  I can sort of live-with the idea of the discovery of a way to recrystallize dilithium (something which did not yet exist at the time of Star Trek IV: The Voyage Home, set many years later), because that discovery is kept a secret by the end of the episode.  (Though I have a sort of hard time believing that such an important discovery could possibly REMAIN a secret for so many decades until the time of Star Trek IV.)  More problematic is the way Tilly is able to just beam the alien home at the end.  Unless Discovery was in orbit of her planet (which nothing in the episode suggests is the case), transporters just don’t work that way in Star Trek.  Also, lots of previous Trek adventures have shown us that 1) the transporter room is usually manned by a crew person, and 2) an alert would sound on the bridge after an unauthorized use of the transporter, so I wouldn’t think a cadet would be able to just waltz in and use the transporter as she pleases.  My eyebrows were also raised that the mess hall would ever be completely empty on a ship as large as Discovery, as it was in the scene in which Tilly first encountered the alien.  This felt like an obvious cost-saving measure to avoid using a large group of extras, as well as a way to have Tilly be the only one to see the alien, neither of which were all that convincing to me.

But while I continue to hope for better attention to these sorts of details from the folks making new Star Trek these days, these glitches didn’t get in the way of my enjoyment of this fun short story.  I hope the next three “Short Treks” are as entertaining.