Skip to the content
HomeWritten PostJosh Reviews the Interactive Animated Film Batman: Death in the Family 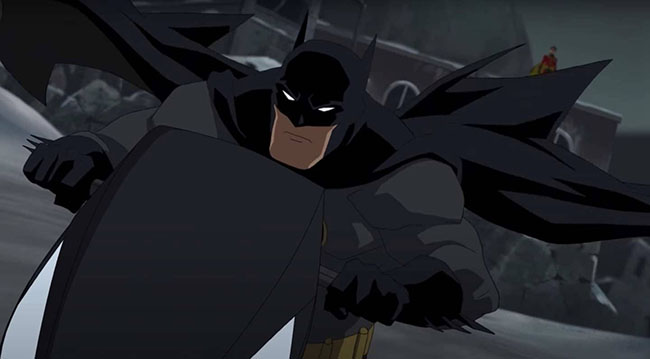 Batman: Death in the Family is the new animated film from DC/Warner Brothers.  For the first time for DC Animation, the film is presented as an interactive experience, with the viewer having several opportunities to choose the fate of the characters, using one’s remote control, as the story unfolds.

The film is based, of course, on Batman: A Death in the Family, the four-issue storyline that ran through Batman #426-429 in 1988.  That story was written by Jim Starlin (creator of Thanos for Marvel) and illustrated by Jim Aparo (one of the most iconic Batman artists of all time) and Mike DeCarlo, with incredibly iconic covers by Mike Mignola.  The end of issue #428 is memorable for asking readers to call a 1-900 number to determine whether Jason Todd, the second Robin after the original Dick Grayson, would live or die.  Fans narrowly voted for him to die, and so he did in the final issue.

I started reading Batman comics soon afterward.  A Death in the Family is one of the first collected editions I ever owned.  (I still have my beat-up, much-re-read copy!)  The events of that story, and the death of Jason Todd, had ripple effects that were felt for years in the DC universe.  In many ways, those ripples are still being felt today.

Seeing as the original comic had a “choose your own adventure” feel to it, with the 1-900 number call-in, this story is a cool choice to use as the basis for an interactive film.  The interactive experience works fairly well.  It’s cool to be able to play a role in deciding how the story unfolds.  Once you get to the end of the story-path you’ve chosen to follow, the disc helpfully provides a simple menu which allows you to easily retrace your steps and to choose different paths.  I appreciated that a lot.

Netflix has pioneered this approach with its two interactive movies, the Black Mirror special Bandersnatch and the Unbreakable Kimmy Schmidt movie, Kimmy vs. the Reverend.  As much fun as Death in the Family is, it pales somewhat in comparison to those Netflix films.  While the branching options worked well on my blu-ray, there was a longer pause between options than there was in the Netflix specials, which somewhat interrupted the smooth flow of the story.  More importantly, there are far fewer points of choice in Death in the Family than there were in either Netflix special.

That’s my biggest disappointment with this film, actually.  It is advertised, correctly, as a short film.  Most paths through the story offer the viewer between three to seven points of choice, for a total run-time of around twenty minutes.  What we get is great, but I was left wanting more.  A LOT more.  There were so many times when we get a quick summary of events in voice-over, over a still image, that I’d have preferred to have seen actually fleshed out into more-developed sequences.  (Example: at one point, when Jason is on the run, he tells us that Barbara wouldn’t forgive him and Dick tried to arrest him.  I wanted to see those scenes!)

I understand the reality that they probably couldn’t afford to animate all of that.  Bandersnatch and Kimmy vs. the Reverend had so many different paths through the story, that there must have been 4-5 hours of total footage.  If you put together all of the different paths in Death in the Family, there’s probably about an hour, maybe an hour and a half of footage.  That is the length of most of these DC animated films.  So I understand that they probably couldn’t afford to animate any more than that.  But the result is that many of the different stories wind up feeling like the Cliffs Notes version of the story, rather than the fully fleshed-out tale I’d have preferred to see.  The many uses of voice-over over a still image (rather than a fully-animated scene) stuck out like obvious short-cuts to me.   (There’s also so much great stuff in the original Death in the Family that was left out!  This animated version basically starts at the end, with the death (or not, depending on your choices) of Jason Todd.  But there was lots of great stuff in the original comic-book story than remains untold.  Someday I’d love to see a more complete adaptation of that tale, even without the interactive approach!)

What’s interesting about this film is that it’s just as much a sequel to the 2010 animated film Under the Red Hood as it is an adaptation of Death in the Family.  Under the Red Hood was an adaptation of the story-line that ran through the Batman comic books in 2005-2006 (and was eventually collected in a two-volume collection called Under the Hood), written by Judd Winick and illustrated by Doug Mahnke and others.  That story-line brought Jason Todd back into the DC Universe, as a violent vigilante out for revenge.  The animated film is one of my very favorite DC Animation films.  The story-line was sophisticated and adult, the animation was strong, and the voice cast (including Bruce Greenwood as Batman/Bruce Wayne, Jensen Ackles as Jason Todd, John Di Maggio as the Joker, and Neil Patrick Harris as Dick Grayson/Nightwing) was superb.

Mr. Greenwood and Mr. Di Maggio both returned to reprise their roles for Death in the Family, and various scenes from Under the Red Hood were incorporated into this film (more or less, depending on which choices you make).  That was cool, as was their approach of matching the design and animation style to Under the Red Hood, so that the two films fit together fairly seamlessly.  (The only down-side is that if you choose a story that follows a similar path to that from the comics — following the death and resurrection of Jason Todd — you get a LOT of reused scenes from Under the Red Hood, which is more than a little boring if you’re familiar with that film.)  The director of Under the Red Hood, Brandon Vietti, both wrote and directed Death in the Family.  I’m sure he was a key player in ensuring the continuity between the two films.

While I wish the film was longer and with more points of choice, I quite enjoyed what we got here with Batman: Death in the Family!  I enjoyed the interactive experience, and I thought Mr. Vietti and his creative team did a great job in charting numerous paths through the story for Batman, Jason Todd, and the other characters.  I enjoyed the connections they put in to other Batman stories, including the famous The Killing Joke by Alan Moore and Brian Bolland, as well as a surprising incorporation of the “Zur-en-ar” stuff from Grant Morrison’s run from the aughts!  There were lots of fun surprises for attentive viewers and comic book fans to discover throughout the various pathways through the film.  The story was adult (and, in some instances, surprisingly violent!  The film is rated R.) without being juvenile or gratuitous (in the way I’ve complained that several of the animated DC films from the past several years have been.)

I’d love to see this interactive approach used again, and I’d be thrilled if it was on a lengthier/more complex story.  But I’m very pleased by what we got here.  DC/Warner Brothers has been on a nice run, recently, with several strong direct-to-disc animated films in a row!  I hope this streak continues!!