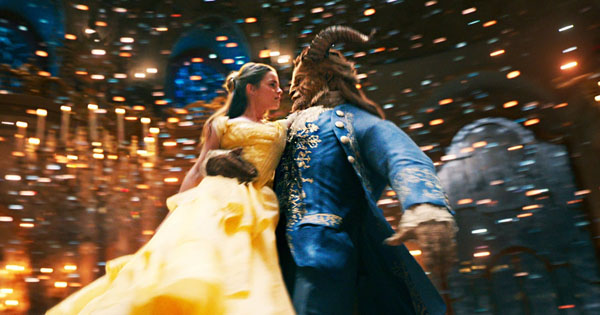 Josh Reviews the Live Action Beauty and the Beast

I am not sure what to make of Disney Studios’ apparent desire to remake every single one of their animated films into a live action version. I wasn’t interested in Cinderella, nor did I see 101 Dalmatians.  I did see Jon Favreau’s The Jungle Book, as I was drawn by the CGI spectacle, and I quite enjoyed it.  When I heard that a live action Beauty and the Beast was in the works, I had some interest because I love the original animated film.  (I remember going to see it when it first came out, on a trip with a high school film class, and being blown away by the film.)  So I was intrigued by the idea of a new version, but also as perplexed as I am any time Hollywood decides to remake a great film.  I can understand remaking bad movies, in an attempt to spin a failed concept or execution into a more successful undertaking, but what is to be gained by remaking an already great movie?

This new version of Beauty and the Beast is an interesting exploration of that question.  On the one hand, I freely admit that this new version is terrific.  I have a lot of great things to say about it, all of which I will get into in just a moment.  But is it better than the original film?  Not in my opinion.  It’s just different.  It’s an extraordinarily well-crafted piece of work, and I had a heck of a lot of fun watching it on a humongous IMAX screen.  But after seeing it, I have been wondering, what was the point?  Why did so many people work so hard for so many years just to remake an already great film?

Perhaps I should say “recreate” rather than “remake,” as this new Beauty and the Beast hews extremely faithfully to the original film.  There are a few tweaks here and there.  They delved a little bit more into the Beast and Belle’s backstories; they changed the character of Belle’s father Maurice a bit; they tweaked Belle’s involvement with the other villagers; they gave the Beast a new song; etc.  But whereas The Jungle Book was a far more complete reinvention of the story, one that took full advantage of what modern CGI can do, this film uses modern CGI not to reinvent the original movie but rather to recreate it as faithfully as they could.  What changes have been made to the original film’s story are entirely superficial.  (I read a LOT in the press, in advance of this film’s release, about the changes made to Belle’s backstory, how she was now more of a fighter for the other girls in the village, and how proud everyone was of a new story-point in which Belle builds an invention to help the other women in the village do laundry more efficiently, so they could have time to learn and not be trapped by menial chores, only for the men to destroy Belle’s work.  But in the finished film, that doesn’t amount to more than a minute, maybe a minute and a half, of screen time.  It’s a tiny tweak to the overall story.)

For this film, that faithfulness was probably the RIGHT decision.  The original film is great, so why mess with it.  Part of the fun of watching this live-action/CGI new version becomes waiting to see how they would recreate what animation could do so easily.  What would the Beast look like?  What would Lumiere and Cogsworth look like, and how would they move around?  How would they handle the dancing dishes of “Be My Guest”?  And as the story continued, I found myself eager to arrive at the high points of the original film, from “There’s Something There That Wasn’t There Before” to Belle’s yellow dress and the ballroom spin in “Beauty and the Beast.”  Had the film not included those moments, I, like most viewers, probably would have been disappointed.

And so this film is a conundrum for me.  I quite enjoyed it, and I think the filmmakers made mostly the exact right choices in their faithful approach to this remake.  But wouldn’t it have been better had all these talented craftspeople been working on telling an original story, rather than recreating what had gone before?

To more directly address the film itself (finally!), I thought it was top-notch.  Visually it was stunning.  Every frame of the film is gorgeous.  The sets and costumes and make-up effects, mixed with seamless CGI enhancements, are all magnificently done, bringing the original animated film to gloriously beautiful life.  The film is filled with fantasy landscapes that are extremely real-looking while also having the imaginative flair that makes a well-realized fantasy film so much fun to look at and to drink in.  The character work on the CGI characters was fantastic.  In particular, I was very happy with the presentation of the Beast.  That character had a particular look in the animated version which I thought would be very difficult to not look silly in a non-animated version.  Here as in most places, the filmmakers stayed quite true to the Beast’s original design, tweaking it just enough to make it work with the live-action characters, particularly Belle, around him.  I was surprised and impressed.

I just wrote about Dan Stevens’ terrific work as the lead actor on Legion, and I couldn’t believe it when I discovered after seeing Beauty and the Beast that it was the same man who played the Beast here.  Mr. Stevens has created a completely different character and voice, transforming into this character.  It’s a very impressive performance.  And he can even sing!

The true star of the film is Emma Watson, and she is fantastic, perfectly cast as Belle.  She looks the part, no question, but far more important than that is the way she is able to capture Belle’s intelligence, her bravery, her loyalty, her toughness, and also her gentleness.  Ms. Watson hits every one of those notes pitch perfectly.  I have read some criticism of her singing, but I thought she did a perfectly good job.  She is clearly not the same caliber of singer as Paige O’Hara, who played Belle in the original film.  There are a handful of moments in which I could tell a song had been tweaked slightly for a less exceptional singer.  But none of this bothered me at all as I watched the film, and I think people have been more critical than Ms. Watson deserved.  Because she sells Belle’s emotional journey, everything else fell into place for me.

Just as I had no idea that Dan Stevens had played the Beast, so was I similarly surprised to discover in the end credits that Ewan McGregor had played Lumiere!  Mr. McGregor is phenomenal, one of the best things about the film.  He is very funny, very soulful, and he kills when it comes time for “Be My Guest.”  I similarly enjoyed Sir Ian McKellan as Cogsworth.  He and Mr. McGregor played off of one another nicely.

One of the portrayals in the film that most surprised me was Kevin Kline as Maurice.  This was the character who was most changed from the original animated film.  In the original film, Maurice is mostly comic relief, a nutty, slightly kooky old man.  Kevin Kline plays Maurice as far more subdued, with far more dignity.  This is a kind, wise man who has been broken by life, but whose love for his daughter keeps him moving.  I loved this portrayal, and found that I cared far more about Maurice here than I ever had before. Mr. Kline also gets a few moments to exercise his significant comic chops, such as when he gets his first glimpse of Chip.

It is a mark of how terrific this film’s cast is that I have gotten this deep into my review without yet mentioning the greatest revelation of the entire ensemble: Luke Evans as Gaston.  It was clear from Mr. Evans’ work as Bard in Peter Jackson’s Hobbit films that he was an actor of extraordinary talent.  But hoo boy does he steal the show here as Gaston.  He’s a phenomenal singer, with impeccable comic timing.  He plays Gaston exactly right, making him a villain who is fearsome and loathsome but also painfully human.  I loved every second of his performance.

He is ably assisted by Josh Gad, who gets far more opportunities to play for laughs — and is terrific every single time — but who also manages to imbue his character with more humanity than he had in the original film, where he was purely comic relief.  Much has been made of the fact that LeFou is canonically gay in this version, and that is great, but this adjustment represents barely five seconds of screen time.  What is so important about that tweak to LeFou’s character (or literalization of what was already there) is that it is one more piece of the puzzle that allows Mr. Gad to transform LeFou from cartoonish comic relief into a character that feels human.  Another important piece: the filmmakers’ wise choice to allow this version of LeFou to make a small pivot towards redemption in the third act.

Emma Thompson does solid work as Mrs. Potts.  Angela Lansbury’s role represented possibly the biggest shoes to fill in the film.  I wasn’t totally sold by Mrs. Thompson’s cockney accent, particularly when singing “Beauty and the Beast,” but overall I enjoyed her work and give her a lot of credit for stepping into this iconic role.  Stanley Tucci, Audra McDonald, Gugu Mbatha-Raw, and Nathan Mack all contribute strong work in supporting roles.  Like I said, this is a heck of an ensemble.

I give a lot of credit to director Bill Condon for putting this film together.  I guess there are plenty of plays that are performed over and over by different casts, and plenty of musicians who record their own versions of popular songs originally sung by others, so why shouldn’t we allow filmmakers to recreate older films that they love?  It’s not my preference for how they spend their time, or how the studios spend their money.  But when a remake is executed as competently as this one, it’s hard to complain too vehemently.