Skip to the content
HomeWritten PostJosh Reviews The Mandalorian: Season One 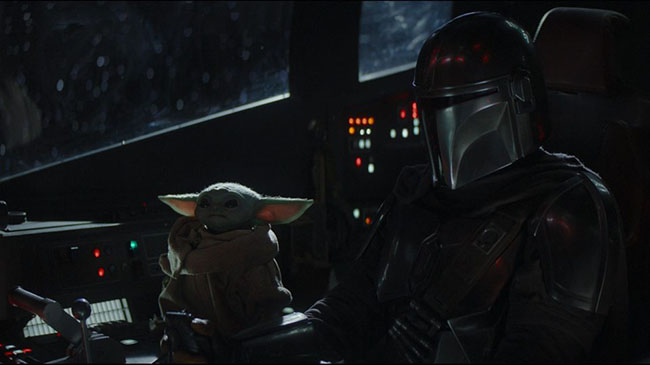 Josh Reviews The Mandalorian: Season One

I loved the first episode of The Mandalorian, the first live-action Star Wars TV show, and the rest of the eight-episode Disney+ series did not disappoint!

Creator Jon Favreau (who wrote six of the eight episodes) has accomplished an incredible feat.  He has created a series that feels completely, 100% like Star Wars, while also telling new stories with new characters.  This is what I want from my Star Wars, and it’s a needle that the movies have often failed to thread.

I love the retro feel of the show’s episodic structure.  It’s weird, I spent my childhood watching sci-fi and fantasy TV shows and longing for more continuity, rather than the “everything back to the status quo” episodic structure that was standard for most television for so much of its history.  But, as I have written about here before, I think many modern streaming shows have leaned too far into that direction.  The “10-hour movie” approach (or 8-hour, or 13-hour) results, too often in my opinion, in series that sag in the middle because they don’t quite have enough story to sustain viewer interest throughout the entire season.  And so I loved how The Mandalorian mostly told 1-and-done stories, with each episode having a satisfying beginning, middle, and end.  There were of course stories and charcater arcs that carried across all of the episodes, but each individual episode felt satisfyingly complete.  By the way, I also was very happy with the individual episodes’ relatively short run-time.  (Most episodes ran about 40-45 minutes.)  I appreciated the concision and efficiency of the story-telling.

Mandalorians and their armor have fascinated Star Wars fans since our first glimpse of Boba Fett.  I love the concept of this show’s main character being a Mandalorian bounty hunter, and I enjoyed the way the series explored and fleshed out the world of the Mandalorians.  I loved getting tidbits of information about Mandalorian society, their beskar armor and the rituals surrounding that armor.  I loved seeing the Armorer (the first female Mandalorian character we’ve seen in live-action).  I was delighted to see a group of Mandalorians in action and kicking ass in the climax of episode three.  (It was awesome getting to see them use their rocket packs!!)  We’ve barely scratched the surface in these first eight episodes; so I look forward to more.

The series was filled with memorable characters.  Pedro Pascal was very strong as the titular, unnamed (until the last episode) Mandalorian.  It’s amazing that “Mando” has characteristics that we can understand and connect with, despite Mr. Pascal’s face being entirely covered by his mask.  What a bravura acting performance!

The big secret of the show was “baby Yoda.”  I am so impressed that Disney and the show’s creators chose to keep this character’s existence a secret until the series premiered.  It doesn’t surprise me that fans have fallen head over heels in love with this character.  I love that the series’ creators have chosen to use puppetry, rather than CGI, to bring this character to life.  He looks amazing.  So life-like, and so cute!!  (I do have questions — if this baby is 50 years old, what has he been up to for the previous fifty years??  Who was taking care of him?  I do also feel I have to question the idea that, at fifty years old, this character is still a baby.  Yoda was an old man on the verge of death at 900 years old.  But if a fifty-year-old of his species is a baby, by that math wouldn’t that make Yoda basically a teenager?  That doesn’t really make sense to me…)  I hope the second season allows us to learn more about this character and where he came from, and about Yoda’s species in general.  (I also would like to learn more about what Werner Herzog’s “The Client” and the doctor working for him wanted to do with baby Yoda…)

Nick Nolte’s Ugnaught character Kuiil was amazing.  I love that they took these silly creatures from The Empire Strikes Back and developed one into an actual character!  I love his nobility and honesty.  It made me so happy every time he said “I have spoken”.

Taika Waititi voiced battle-droid IG-11.  Here too, it’s awesome that the show took this type of droid — so intriguingly glimpsed in the bounty hunter line-up scene in Empire — and developed him into such an endearing character.  I didn’t expect to fall in love with this hunter-killer droid!!

Gina Carano was great as Cara Dune, a Rebellion shock trooper.  I enjoyed seeing this new type of character.  Cara Dune was a lot tougher than many of the Rebellion members we’d seen before!  I loved this kick-ass female warrior, and I hope we see more of her.

It was a delight to see Carl Weathers (Rocky, Predator), back on screen in a major, serious role (as opposed to his very funny appearances on Arrested Development) as Greef, Mando’s contact in the bounty hunter guild who doles out his assignments.  Mr. Weathers still has it!  He was a perfect fit for this character and this series.

The series was chock full of fun nods and references to all sorts of Star Wars lore.  This was fun for a hard-core fan like me, but thankfully it never became too distracting or overwhelmed the story-telling.  (Well, I probably could have done without a return to Tatooine in this first batch of episodes.  For a backwards, nowhere world, Tatooine sure seems to figure very centrally into many Star Wars stories!  I didn’t need to see Tatooine in this first season… but that being said, it sure was cool to see the familiar view of that planet from space (From the original Star Wars) on screen again when Mando’s ship entered orbit.  And I loved Amy Sedaris’ character of Peli Motto, a chattery space-port worker.

I also enjoyed Clancy Brown’s big bruiser Burg (from episode six), as well as the bounty hunter played by Ming-Na Wen (in episode five).  (I wish they hadn’t killed her off!)

The series looks amazing.  This isn’t a cheap, TV version of Star Wars.  The visuals on this show are extraordinary.  I am incredibly impressed by how beautifully and completely they were able to create each new alien world and environment.  This is a visually stunning show, and I love how they allow the vistas time to really sing on screen.

Star Wars has always been a franchise that drew aspects of itself from multiple sources.  The Mandalorian feels, intentionally I’m sure, like a Star Wars Western.  It’s a very cool approach, and it really works!

I have a few quibbles with the season finale.  I loved getting to meet Giancarlo Esposito (Breaking Bad) as a new Imperial bad-guy, Moff Gideon.  But with so few Imperials left after the fall of the Empire, it seemed very dumb to me that he so casually killed Werner Herzog’s “The Client” and his Stormtroopers.  I guess they wanted to establish Moff Gideon as a REALLY BAD GUY, but his actions seemed so dumb and wasteful to me.  (Also, I was sad to see Werner Herzog’s great character written off the show!)

Dave Filoni’s animated Star Wars series The Clone Wars and Rebels both spent a lot of time exploring Mandalorian culture and characters.  I was curious to see to what degree this series would maintain consistency with those shows.  I was VERY surprised to see Moff Gideon wielding the Darksaber in the final shot of the series finale!!  That was a deep-dive connection that I was not at all expecting to see!  I am excited and curious to see where this story goes in season two.  Mr. Filoni was clearly an important creative voice in The Mandalorian season one, having written two episodes and directed one, and I am pleased to see this series picking up threads from his animated shows.

(One thing that confused me, though, was the revelation in the series finale that the Mandalorians are a creed, and not a race.  Doesn’t that contradict what we’ve seen in The Clone Wars and Rebels, in which we visited Mandalore and met many different Mandalorian families?  Is the suggestion that Mandalore has been mostly wiped out in the years since the events of those shows, and so Mandalore has now BECOME a creed, rather than a race of people?  I wonder if we’ll learn more in the “Siege of Mandalore” story that we’ll finally get to see when The Clone Wars returns for its final run of episodes.)

As you can tell, I loved The Mandalorian.  This show is everything I wanted it to be.  I can’t wait for season two!