Skip to the content
HomeWritten PostJosh Reviews The Night Manager 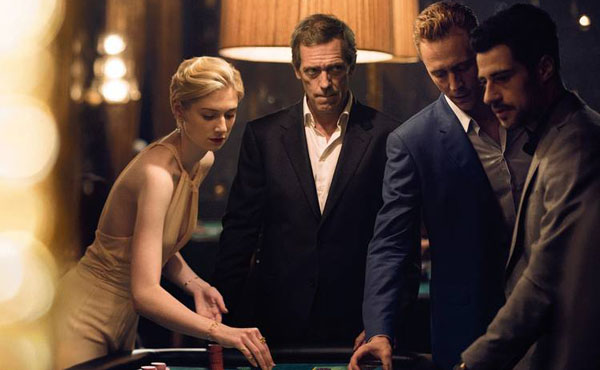 The Night Manager is a six-episode mini-series based on the novel by John le Carré.  The adaptation was directed by Susanne Bier (who just won an emmy for her work directing this mini-series) and written by David Farr (a writer who also worked on the British TV show Spooks, called MI:5 here in the U.S.).

Jonathan Pine (Tom Hiddleston) is a former soldier who now works as the night manager at a fancy hotel in Cairo.  One night, the beautiful mistress of a powerful Egyptian man gives Jonathan evidence that her husband is involved in arms sales to terrorists.  Jonathan manages to pass this info on to an old friend in the British military, but this action winds up getting the woman, with whom Jonathan has fallen in love, killed.  Jonathan flees Cairo, adopts a new name, and tries to forget everything that happened and begin a new live in isolation in Switzerland.  But a chance encounter brings Jonathan face to face with the man he believes responsible for his lover’s death: the wealthy British CEO Richard Roper (Hugh Laurie).  Believing that this man who purports to be a social justice warrior is actually someone who profits off of death and destruction across the globe, Jonathan agrees to work with an outsider British intelligence officer in an attempt to infiltrate Richard Roper’s organization and bring him down.

As can be expected from a story based on the work of John le Carré, The Night Manager is a wonderfully tense, twisty spy caper.  It takes a little while for the story to get moving, but once Jonathan has come face to face with Roper and begun to earn his trust and get inside his operation, the show really comes to life.  The charisma and chemistry between Mr. Hiddleston and Mr. Laurie is tremendous, and it’s great fun watching these two intelligent men cagily circle one another.  This sort of story only works if you believe that a) the mole is smart enough and clever enough to have a chance to actually succeed in infiltrating the bad guy’s operation without getting immediately found out, and b) that the bad guy is smart enough and clever enough to be fully capable of discovering what the hero is really up to, thus giving the story exciting dramatic tension.  The Night Manager succeeds on both counts wonderfully.

The story is leisurely paced but that works well in allowing us to gradually discover these characters and the world they live in.  Once Jonathan is in and the screws start to tighten, I was thoroughly hooked.  Six episodes feels like the perfect length for this story.  It’s long enough to allow for greater complexity, and a more enjoyable slow-burn build-up, than would be allowed by a two-hour movie.  And the show doesn’t suffer from some of the feelings of being stretched too long that I have felt weakened some of the recent 13-episode Netflix shows.

The show is carried by the terrific work of Tom Hiddleston and Hugh Laurie.  Mr. Hiddleston was a revelation as Loki in the first Thor film, a wonderfully complicated villain with intelligence and humor.  I was thrilled that the character was used again as the main villain in The Avengers, and that he appeared again in Thor: The Dark World.  I’m eager to see him again in the third Thor film, Ragnarok, which is coming next year, and I have also enjoyed seeing Mr. Hiddleston break out from the confines of the Marvel movies.  He was terrific in Guillermo del Toro’s underrated Crimson Peak, and he’s again very strong here in The Night Manager.  His handsomeness is used to great effect as we can believe that Sophie, Freddie Hadid’s mistress, will fall for him in what turns out to be the story’s inciting incident, and also that he has the charisma to enthrall people which he later uses to infiltrate Richard Roper’s inner circle and to impress Roper with his usefulness.  Mr. Hiddleston is also able to give Jonathan Pine a strong inner life, and to show us the conflict behind the character’s eyes first as he initially resists getting drawn into Roper’s world, and then has to find a way to hold onto himself while staying one step ahead of Roper and his men.

Hugh Laurie, meanwhile, is all oily two-faced charm as the wealthy and powerful Roper.  Mr. Laurie enthusiastically bites into his portrayal of this master-of-all-he-surveys, showing us Roper’s own magnetic personality and charisma, which has enabled him to climb so high, and also his ruthless viciousness.  Mr. Laurie makes Roper both enviable and despicable at the same time, which is a neat trick.  He’s a great villain, one who is a strong threat to our hero Jonathan Pine and one who we eagerly root to see get some comeuppance by the end of the mini-series.  And as I wrote above, the show really sings when Mr. Laurie and Mr. Hiddleston are together on screen.  It’s great fun watching these two actors play off of one another.

They are surrounded by a capable ensemble.  Olivia Colman is great as the smart, stubborn, and very-pregnant British intelligence officer Angela Burr.  (Her character’s being pregnant reminded me of course of the iconic Marge Gunderson from Fargo, though Angela was far more blunt than sweet Margie.)  Tom Hollander (Gosford Park, Hanna, and the second and third Pirates of the Caribbean films) is delicious fun as Roper’s right-hand man, “Corky,” who is instantly suspicious of the undercover Jonathan Pine.  Elizabeth Debicki (who I totally failed to recognize from her recent role as the villain in Guy Ritchie’s Man From U.N.C.L.E. film) is gorgeous and does nice work as Roper’s girlfriend Jed, bringing some nice moments of color and character to a role that winds up being somewhat damsel-in-distressy.  David Harewood is terrific as Angela’s loyal American friend who assists her in her op against Richard Roper.  (This was a character with what felt like a lot of depth beyond what we got to explore in this miniseries — I’d for sure watch a follow-up focused on him!)  Tobias Menzies (Rome, Game of Thrones, Outlander) gives great glower as the dirty agent at the top of MI6.

The mini-series is very well-directed by Susanne Bier.  It has the sense of scale that is needed to make this globetrotting spy story work, and we get to see some truly lovely imagery.  The mini-series has a somewhat cold, digital look that I have noticed in several recent British TV productions, most notably Sherlock.  (I’m not entirely sure if it’s a conscious stylistic choice or a byproduct of the technologies being used for these British TV productions.)  It’s not distracting, just something that differentiates The Night Manager from the “look” of an American production such as, say, the film adaptation of John le Carré’s Tinker, Tailor, Soldier, Spy from a few years ago.

My only real complaint about The Night Manager was its abrupt ending.  While the final scene with Richard Roper was very satisfying, I found myself left with a ton of questions.  What would happen next for Angela?  Would she receive any recognition and respect for her work, or would she find herself drummed out of the service for good after crossing her superiors?  What would befall any of the dirty higher-ups from MI6 such as Tobias Menzies’ Geoffrey Dromgoole?  More importantly, what sort of life was ahead for Jonathan Pine?  Where would he go, what would he do?  Would he return to his profession of being a Night Manager or would he find something else to do with his life now that the demons from his past had been put to rest?  Would he and Jed actually have some kind of future together?  After spending six hours with these characters, I wanted a few additional minutes of wrap-up once the main story of the caper against Richard Roper had been concluded.

But overall this was a fun, engaging spy thriller.  The Night Manager boasts a winning combination of strong material by John le Carré, sharp writing and directing, and a great cast led by stand-out performances by its two leads, Tom Hiddleston and Hugh Laurie.  This was a pleasure to watch.