Skip to the content
HomeWritten PostJosh Reviews the Premiere of Watchmen 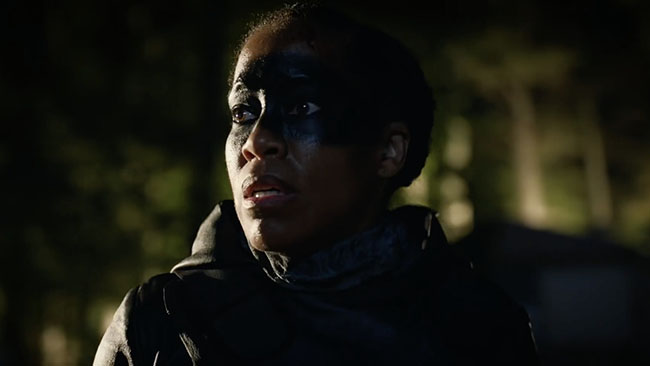 Josh Reviews the Premiere of Watchmen

Watchmen, the 1986-87 mini-series/graphic novel by Alan Moore and Dave Gibbons, is probably the single greatest comic book story ever made.  The collected graphic novel was selected as one of Time Magazine’s 100 greatest English-language novels of the past century.  (I waxed poetic about the themes of Watchmen here.)  The long considered unadaptable story was adapted into a film by Zack Snyder in 2009.  I quite enjoyed that film and think it’s very underrated, even while I acknowledge that Mr. Snyder failed to incorporate much of the subtext and meaning that made the story so powerful.  (I think the film’s “Ultimate Cut” is a far superior version.  That much-longer version combines an Extended Cut of the film with the animated Tales of the Black Freighter sequences.  If you’re going to watch the Watchmen film, the “Ultimate Cut” is unquestionably the way to go.)

Now Damon Lindelof (Lost, The Leftovers) has brought Watchmen to TV, in a nine-episode new series for HBO.  Mr. Lindelof and his team have taken a fascinating and unexpected approach.  This Watchmen show is not an adaptation of the comic.  Rather, it is a new story set in the world of the Watchmen comic, taking place thirty-plus years after those events.  I have watched the series premiere, and I thought it was thrilling and shocking.  I was completely gripped; so right now I am all-in on this new version and very excited to see where this goes.

This first episode of Watchmen contains a number of small touches that tell us that we’re in the same universe as the original Watchmen comic-book, but this first episode presents us with an entirely new story and new characters.  The episode opens with a riveting sequence, set in Tulsa in 1921.  We’re thrust right in the middle of the Tulsa Race Massacre, a horrifying explosion of racial violence and one of the worst riots in U.S. history.  (I’m embarrassed to admit that I knew nothing about this horrible incident and I had to read up on it after the episode.  I feel a little bit better that creator Damon Lindelof admitted — in this wonderfully in-depth interview conducted by Alan Sepinwall — that he too knew little about this massacre when he first came across the story.)  This is not at all how I expected a Watchmen TV show to begin!  It’s only the first of many wonderfully surprising and unexpected choices made by Mr. Lindelof, and it’s a fantastic opening to the show.  (In a separate article by Mr. Sepinwall, who is one of my very favorite TV reviewers, Mr. Sepinwall makes the astute observation that this opening also presents us with a very Superman-like origin story for one of our characters: a child spirited away to safety by his doomed parents.  I wish I’d realized that myself!!)

While the original Watchmen was concerned with the current-at-the-time fears of potential nuclear annihilation if the Soviet Union and the United States continued to escalate the hostilities between their two “super-power” nations, Mr. Lindelof’s Watchmen has cleverly shifted its focus to a threat that feels very much of the moment for 2019: white supremacy and the continuing racial strife and violence in this country.  I love that Mr. Lindelof has clearly tried to adapt the approach that Mr. Moore and Mr. Gibbons took with their Watchmen.  Rather than adapting the actual content of the original Watchmen comic, this Watchmen show is aiming to adapt the comic’s spirit.  This is a bold approach and one that I applaud.  (Will it work?  I loved this first episode, but I’ll have to withhold final judgment until we see this entire first season.)

When the show shifts into present-day, still set in Tulsa, we’re presented with a terrifying world that seems not-so-inconceivable based on the reality of 2019 in the United States.  In a reversal of the original comic (in which super-heroes had been outlawed by the police), we now see that the police officers all wear masks (and many of them have donned super-hero-like garb) in order to protect their identities in a world in which violence against police officers seems common-place.  The Tulsa police are in open conflict with a group of White Supremacists calling themselves the Seventh Cavalry.  These white terrorists also wear masks — masks patterned after that worn by Rorshach in the original comic.  It’s as if these men have learned all of the worst lessons from Rorshach.  They’ve bought into his right-wing, fascistic tendencies and fear of the other, with none of his firm moral code and sense of right and wrong.

The show’s cast is terrific.  The series is anchored by Regina King, who plays Detective Angela Abar, a baker who also works secretly as a Tulsa Police detective, operating under the super-hero-like name “Sister Night”.  Ms. King is electrifying — fierce and brave.  I look forward to getting to dig deeper into her character as the show progresses.  Don Johnson is spectacular as Angela’s mentor and superior officer, Judd Crawford, the chief of the Tulsa Police.  Tim Blake Nelson is wonderfully weird and scary as Wade, a Tulsa Police detective who wears a shiny, reflective full-face mask.  Yahya Abdul-Mateen II (who played Black Manta in Aquaman and also appeared in the most recent season of Black Mirror, about which I’ll be writing soon) is Angela’s husband Cal.  Louis Gossett Jr. pops up briefly as an elderly, crippled man who looks to have great importance as the series moves forward.  And then there is Jeremy Irons, who appears in one delightfully daffy scene as a rich old recluse who I assume is Adrian Veidt (Ozymandias from the comic), but who is unnamed in this first episode.

This first episode contains lots of little fun nods to the comic, but it’s totally accessible for a newbie because this story and these characters are entirely new.  I am very curious to see how closely this series will wind up connecting to the original comic.  For now, those connections are few and far between, and mostly they’re in background subtext and not the main story.  Here’s a fascinating quote from Mr. Lindelof, from the interview with Alan Sepinwall that I linked to above:

“My desire was, when the pilot ends, the person who’s never seen Watchmen before turns to the person who is the Watchmen expert and says, “I’m confused, can you explain things to me?” And that person goes, “Nope!” And so they’re like, “Oh, cool, at least we’re in it together.”

Other thoughts:  (Beware some SPOILERS ahead as I dig into this first episode a little more deeply.)

* My eyes were peeled for references and connections to the original Watchmen, and there are lots of fun things to be found.  In terms of actual characters from the Watchmen comic, we only see Jon Osterman (Dr. Manhattan) on Mars in a very brief news clip early on, and then there’s the scene with Jeremy Irons, who I assume is Adrian Veidt (despite our seeing an earlier newspaper headline that Veidt had been declared dead).  Jeremy Irons’ character is wished happy anniversary by his weird two servants — I assume this is the anniversary of Veidt’s saving the world through his master plan?  When Mr. Irons’ character says he is writing a play called The Watchmaker’s Son, that’s a clear reference to Jon Osterman.

* My biggest question about the world of this Watchmen show is regarding the answer to the huge question posed by the final page of the Watchmen comic — is the world still in the dark about what Veidt did, or was Rorshach’s journal released to the public?  If indeed I am correct that the anniversary being celebrated by Jeremy Irons’ character is Veidt’s master plan, that seems to indicate that the truth of what he did is still unknown (as otherwise his work would have been undone, so this wouldn’t have been a happy anniversary to celebrate).  On the other hand, in the Seventh Cavalry’s video, the lead man quotes Rorshach directly, which seems to indicate that the words of Rorshach’s journal HAVE been made public…

* I don’t know what was going on with the hail of little squids, but that was an amazing sequence.  (Is this continued fallout in Earth’s atmosphere from the giant squid attack in New York that was manufactured by Veidt?  Or something else entirely??)

* I loved the revelation that the tactical van in which Judd and others were monitoring the assault on the Seventh Cavalry cattle ranch was actually a flying ship modeled after Archie, Owlman’s owl-ship!!  (Or was that actually Archie itself??  I figured it had to be a replica, because how would these Tulsa police officers happen to have the real Archie?)

* The cops’ high-tech interrogation “pod” was cool (and creepy).

* Speaking of creepy, what was up with the nude thigh massage that Jeremy Irons’ character’s received from his pretty young maid?  Yech!  (The creepiness of that scene leads me to believe that those two servants are somehow not actually real people, but something created by Veidt.)

* I noticed two evocations of Watchmen’s iconic blood-splattered yellow smiley-face button.  First was the shot of the eggs being mixed by Angela during her cooking demonstration (and by the way, I was struck that this cooking demo was all about separating the “whites” from everything else), and the second was at the end, when Judd’s blood dripped onto his fallen badge.  Nice.

* I loved the glimpses of the TV show about the Hooded Justice, one of this universe’s original super-heroes as per the Watchmen comic.

* I’m amused that Don Johnson’s character was killed off at the end, which had famously been Mr. Lindelof’s original plan for Jack in the Lost pilot.

* Though, wow, that was a sucker-punch of an ending, with Judd brutally lynched and the revelation that the old man in the wheelchair was (probably) the boy from the 1921 prologue!!  I can’t wait to see where this goes…!!

OK, I’m hooked.  I am on board for this ride, Mr. Lindelof.  I look forward to seeing what’s next.  Please don’t let me down.