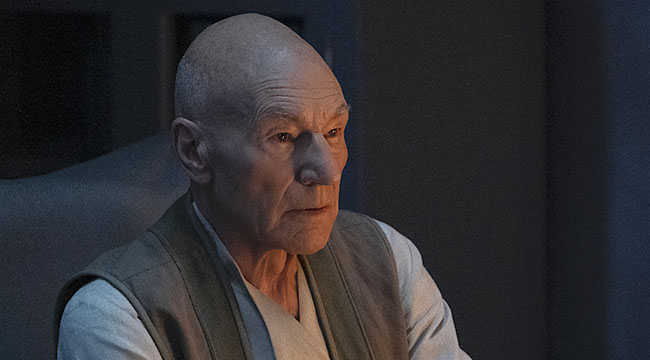 Star Trek: Picard has been a very mixed bag for me.  I’ve enjoyed watching it, and I think it’s been far better executed than the two seasons of Discovery we’ve gotten so far on CBS All Access.  On the other hand, in my opinion Picard contains many of the same flaws that Discovery has had: plots that doing make sense; storytelling that moves too fast to adequately explain what is happening; thinly-developed characters, many of whom have motivations that either are kept secret from us or that don’t make sense; and a lack of continuity with previously established Star Trek.  The Picard season finale, “Et in Arcadia Ego” part 2, is very much of a piece with the first nine episodes of this season.  There are some wonderful individual moments; the cast is great; Sir Patrick Stewart in particular shines as always; and the visuals are beautiful.  I just wish it all came together in a more satisfying way.

Let’s start with what works.

The show, as always, is beautiful.  The production values on this series have been extraordinary, and it’s awesome to see television Star Trek realized with feature film caliber attention and budget.  There are lots of great locations in this episode: the crashed Borg Cube, the crashed La Sirena, the androids’ utopian complex, and the bridges of several starships.  Seeing the Orchids take on the Romulan fleet in orbit is particularly spectacular.

There are some delightful character moments: Riker’s triumphant return, back in uniform and back in the Captain’s chair on a starship.  (I wish it was the Enterprise.  The series never revealed what happened to the Enterprise...!  I’d love to see her in season two…!)  Picard bidding Riker adieu.  Rios’ and Seven’s sharing a drink, looking out at a gorgeous vista.

And, of course, the scene between Picard and Data.  I’m thrilled that Brent Spiner was back as Data in the finale, beautifully bookending his appearance in the premiere.  (Mr. Spiner also appeared in these last two episodes as Dr. Alton Soong, however that character wasn’t very successful in my opinion.  I just don’t buy that Dr. Soong had a song about the same age as Data who we never heard of before and who never had any interaction with Data while he was alive.)  The survival of Data’s consciousness doesn’t make any plot sense to me, but the scene is so emotionally moving that I can mostly forgive the show for this.  (Though, seriously, as I’d commented at the start of the season, the idea that Data’s consciousness could be reconstructed from one fragment of his positronic net is the sort of magic fake-science I hate to see on Trek.  Also, if Alton Soong and Bruce Maddox were able to recreate Data’s mind and consciousness, why didn’t they do anything with it?  They just kept it in, basically, a box on Soong’s desk??  They’re clearly able to build other androids, so why didn’t they put Data’s mind back in a new android body?  Data’s desire to be finite, as all human beings are, is sweet and a beautiful extension of Data’s long-held desire to be human.  But his request for euthanasia didn’t make sense for me when this show has established that he could be returned to “life.”  I understand his not wanting to live FOREVER, but wouldn’t he want to at least live out a relatively normal human lifespan?)  But I can put most of that aside to enjoy the beautiful scene between Picard and Data, reunited at last, beyond death.  If for nothing else, I can appreciate Star Trek: Picard for giving Data a far better ending than he received in Nemesis, the terrible final TNG film.

Plot problems all over the place.  Since Narek and co. are in such a rush to stop the androids’ from activating their beacon that will summon super-androids to destroy everyone, why do they waste a whole night having a campfire outside the La Sirena?  (For that matter, why have a campfire at all since they had already restored power to the La Sirena?  Also, why have a campfire outside when the visual effects wide shot clearly showed a storm beginning?)  Once Alton Soong learns the truth about what the android leader Sutra did, why doesn’t he confront her in public, in front of all the other androids, so they can all learn the truth?  Why have our heroes been able to track the Romulan fleet’s movements across the quadrant as they approached the androids’ world, but somehow they had no idea when Starfleet would arrive?  (Obviously this was to keep that as a last-minute surprise for the audience, but it doesn’t make any plot sense.  And the show doesn’t bother to explain why Picard couldn’t communicate with Starfleet in the previous episode.)  Why does the Romulan fleet, led by fanatics bent on annihilating all synthetic life, wait so damn long before actually firing on the planet (conveniently giving our heroes plenty of time to save the day)?  Why doesn’t Riker hang around at the end, or maybe leave just a few or even one of the starships in his enormous fleet, just to make sure everything is OK?

And that’s just in this episode.  I was hoping that the series would take the time, at some point, to better explain it’s back-story and set-up from the premiere, but that never happened.  Why did Data paint a woman who looked just like Soji and Dahj, when he died decades before they were created?  Why were those two incredibly human-looking androids sent away from their android home-planet and placed, without any memories of their past or purpose, in Federation society?  And, oh yeah, why did the Synthetics turn on the Federation and massacre everyone at the Utopia Planitia shipyards, and what happened to all of them afterwards??  None of this was ever explained to my satisfaction.

While Picard has shown a lot more attention to Trek continuity than Discovery, it has still bungled so many things.  For every continuity reference that makes my heart sing (such as Riker’s mentioning the Treaty of Algernon, or Dr. Jurati’s remembering that there actually is a thing called “the Picard maneuver”), there’s something that I can’t understand why they messed up.  For instance, Narek comments that the legend of android destroyers began long before his ancestors first arrived on Vulcan… but surely he means arrived on Romulus, FROM Vulcan, right?  (The Romulans were Vulcans, originally, who left Vulcan millennia before the era of Star Trek.)  I was also very let down by the visual effects shots of Riker’s fleet of Starfleet ships.  Why did every single ship have a brand-new design?  There were echoes of the Enterprise E (from the TNG movies) in the look of a lot of those ships.  And also (UGH!!!) echoes of the huge-nacelled look of the J.J. Abrams “Kelvin-verse” ships.  But not only did all two-hundred-ish ships in this assembled Starfleet look very similar, they all seemed to be completely new designs.  Not only is this unrealistic (I can’t believe all starships would now look completely different from any and all ships we saw during TNG/DS9/Voyager, even though only a few decades have passed), but it robs the moment of its impact.  Compare the awesome effect of the first time we saw Starfleet assembled and ready to kick ass in Deep Space Nine’s season 5 finale “A Call to Arms,” as well as the many subsequent amazing space-battles in the latter seasons of that show, in which we saw fleets of Federation vessels assembled.  We’d always get to see an array of ships of different styles and classes, many of them call-backs to ships we’d seen before (ships that looked like the Reliant from Star Trek II, or the Excelsior from Star Trek III, or the Galaxy-class Enterprise from TNG, etc.), and it was SO COOL!  But the assemblage of dull-grey, almost identical-looking ships we saw here just didn’t land for me.  It feels like a big missed opportunity.

I mentioned I hate magic fake science on this show, so you can imagine I wasn’t wild about the super android device that could magically repair Rios’ ship as well as create hundreds of completely convincing duplicates of the ship to fool the Romulans.

And that brings me to the death and resurrection of Jean-Luc Picard, which was a big swing and a miss, in my opinion.  I knew this show had already been renewed for season two, so while the scenes of Picard’s death and his friends’ grief were moving, they rang hollow because I knew he couldn’t really be dead… and lo and behold, a few minutes later, he was reborn as good as new.  I don’t get why the show went there.  There was no reason his neurological disorder had to suddenly turn fatal in the final minutes of the season.  They didn’t succeed in getting any dramatic mileage out of his fake-out death.  It felt like a cheat to me, and so I just wound up being annoyed.

And the manner of his resurrection… ugh.  The idea that Alton Soong and the androids could not only create an android that is perfectly, 100% human-looking, but also one that will age and die just like a normal human being is hard to swallow.  The idea that they could — in the few short moments before Picard died — scan and perfectly retreat his entire mind — including all of his memories and personality — and then place that into an android body is quite a few steps too far, for me, into magic-land.  (It’s just as dumb an idea, for me, as Khan’s magic death-curing blood from Star Trek Into Darkness.  Once this technology exists, why would anyone ever die??  Anyone sick or injured can now be reborn in a perfect android body, right???)

In the end, I’m glad Star Trek: Picard exists.  It was a pleasure getting to see Patrick Stewart reprise this iconic role, something I’d never expected would happen.  I just wish the show was better!  As enjoyable as it’s been, it’s also been intensely frustrating.  The ingredients were there for this show to have been amazing.  But it never got there.  What will season two be about?  Will that season be stronger than what we got here?  I don’t have any reason to have confidence that it will, based on this season of Picard and the two seasons of Discovery, but hope springs eternal.  I continue to long for great new Star Trek.  Let’s see what’s out there…