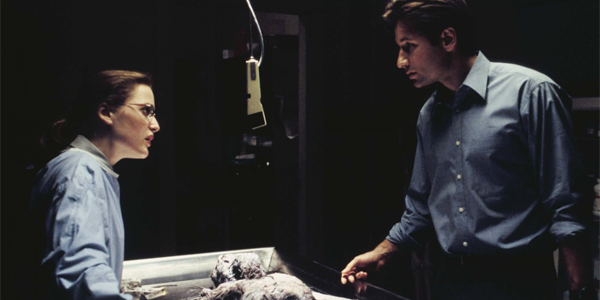 My father convinced me to start watching The X-Files about half-way through its first season, back in late ’93 or early ’94, and I was quickly hooked.  I became a huge fan of the show, and I have been ever since.  Seasons two through five of The X-Files are pretty spectacular, and what other TV series in recent memory has transitioned into a feature film in the middle of its run?  It’s unprecedented, and only serves to illustrate what a behemoth The X-Files was back then.

That 1998 movie (which fans like to call Fight the Future but which, back then was just known as The X-Files movie) was the first time the series stumbled.  In the years since, I have grown to love that first X-Files film.  I recently re-watched it, and now it looks like a time capsule of The X-Files at the height of its power.  I’d hold it up as one of the best examples a classic X-Files story, twisty and thrilling, gorgeous to look at and with some terrific humor and character beats.  At the time it disappointed, though, mostly because it didn’t provide the definitive answers that fans of the series had expected.  Seasons six and seven of the series, after the movie, were still solid, though the bloom was somewhat off the rose.  The biggest problem was that, by that point, the show’s mythology — what had been one of its greatest strengths — was starting to become a weakness, too convoluted to make much sense.

The finale of season seven was designed to possibly serve as a series finale, since when the episode was filmed it was uncertain if the show would return.  (This is a terrible way to treat a long-running successful show.  Today, huge hit shows tend to be more able to end at a time of their own choosing, and thus able to craft a more satisfying ending.)  Looking back now, in many ways I wish the show had ended after season seven, because when the show returned it was without David Duchovny, who appeared only sporadically in those final two seasons.  I don’t want to overly bash seasons eight and nine, as I actually think that most of the individual episodes were still pretty great.  But the show had to twist itself around narratively to explain Mulder’s absence in a way that I felt damaged the show and the characters.  (I just don’t buy Mulder going on the run and leaving Scully, it doesn’t feel like something that character would do.)

I have often lamented on this site how seldom it is that a pop-culture juggernaut is able to have a definitive, satisfying ending.  As I noted a moment ago, it has thankfully becoming a little more common these days that a successful TV show is able to end on its own terms (Lost, Breaking Bad, Battlestar Galactica, The Sopranos), but far more common is that successful franchises are milked until they peter out.  (I have often commented about what a miracle it is that the original Star Trek crew was given such a satisfying send-off with the magnificent Star Trek VI: The Undiscovered Country.  Conversely, it’s an enormous shame that the Next Generation crew were never given a true ending — instead, their story ended meekly with the terrible Nemesis.)

I have often considered the X-Files’ lack of a proper ending to be one of the great pop-culture disappointments of the past several decades.  The series finale of the show was, in my opinion, one of the weakest episodes of the entire run of the series, and the second movie, released years later, was a deeply unsatisfying low-budget affair.  (Looking back on 2008’s I Want to Believe, one sees that the film is better than it’s usually given credit for being, but still, it’s laughably tiny budget was an insult to this once-great franchise, and the one-off “monster-of-the-week” story was not what any of the fans were looking for.)  In the glory years of the show, it seemed as if The X-Files was building to something huge.  Would the series culminate in an alien invasion?  A final confrontation with the Syndicate, the cabal of men who had been secretly collaborating with aliens since the nineteen fifties?  Would Mulder ever be reunited with his long-lost sister Samantha?  Most fans expected these story-lines to climax in the planned series of post-series feature films, but those movies never materialized.  And so, for many years, The X-Files lay unfinished. 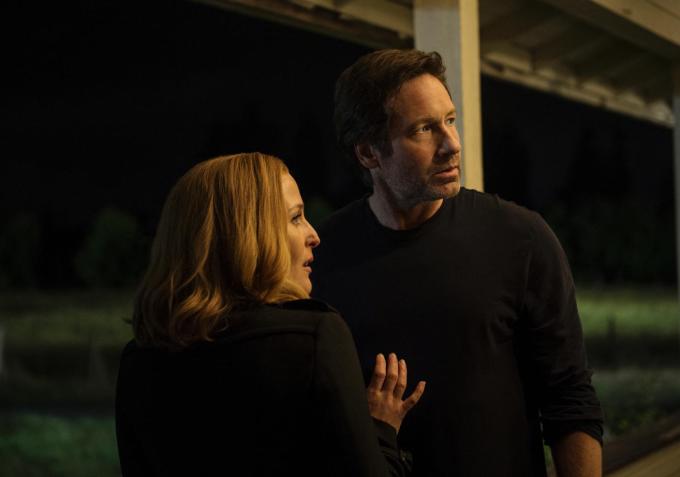 When news broke last year that the series would be returning for a six-episode “event series,” I was thrilled.  A six-hour mini-series was an even better idea than a third movie, in my opinion.  Six hours would give Chris Carter and his team plenty of time to bring The X-Files’ story to a proper resolution, rather than having to jam everything into a two-hour movie.

What’s fascinating — and disappointing — about this six-episode event series, now that I have seen it, is that Chris Carter and his team did not at all approach the project with the goals that I’d assumed they would have: that is, to give the series a proper conclusion.

Instead, it seems that Chris Carter & co. have decided to try to just pick things up where they left off.  Rather than telling a long story over these six episodes, each of the six episodes was pretty much a stand-alone installment, and while the first and sixth episodes leaned on the show’s “mythology,” the other four were basically “monster-of-the-week” episodes.  In other words, the show was structured just like the old seasons used to be.  (Up to and including the status quo being restored by the end of the first episode — a huge complaint that I have about the premiere, which I’ll get more deeply into in my next post — just like used to happen in the show, when a season finale would make things crazy but then things would usually be back to normal but the end of the next season’s premiere.)  This mini-series has been referred to as “season 10.”  Heck, they even used the same opening credits (with just a few tiny tweaks, not for the better) that they’d been using ever since season one back in 1993!!!

If we had some sort of guarantee that we’d be getting six new X-Files episodes a year for the next few years, then I could understand this approach.  But with no such guarantee (no eleventh season of the show has been announced), this six-episode season feels to me like a huge missed opportunity.

Don’t get me wrong, it was phenomenal getting to see six new adventures of Mulder and Scully!!  I love these characters, and I think both David Duchovny and Gillian Anderson did a fine job stepping back into these roles.  Several of the six episodes were quite good, with one being spectacular.  (That would be the third episode, “Mulder and Scully Meet the Were-Monster,” written by Darin Morgan, who wrote four episodes of the original show, each of which was an all-time great.)  That this new short season gave us “Mulder and Scully Meet the Were-Monster” makes the whole thing worthwhile, in my mind.  Still, I was hoping for more.

I have two other major criticisms.  First, I didn’t love the look of these new episodes.  Now, part of this might be an adjustment to seeing the show in HD, which would understandably give these new episodes a different feel than the classic ones.  But it’s more than that, I think.  With the exception of the finale, I found all of these episodes to be far too brightly lit.  I didn’t feel these episodes captured the show’s famously shadowy, murky look.  I have to also say that I was not terribly impressed with the production design or visual effects.  The X-Files in its prime always looked amazing, creating movie-quality look and effects on a weekly television budget.  Not so these episodes, which looked very cheap to me.  The UFO crash in the premiere looked like something out of a video game, and the alien corpse was entirely unconvincing.  I was able to forgive these sins until the finale, in which the wheels truly fell off the cart.  The show told us that a worldwide armageddon was going down, but clearly they didn’t have the budget to show us any of it.  We just saw a couple of crowded streets and repeated shots of an increasingly sweaty Joel McHale alone in a room giving us exposition.  And how about that god-awful shot of CSM taking off his mask to show us the damage to his face?  You could see exactly the fuzzy line, by his nose, where they’d replaced William B. Davis’ real face with the visual effect.  It was one of the most shoddy visual effect shots I have seen on TV in years.  Embarrassing.

Number two, while it was great to see Mulder and Scully back, I was somewhat bummed at the lack of love given to the rest of the show’s supporting cast.  Mitch Pileggi was thankfully back as Walter Skinner, but despite their adding him into the opening credits in a few of the episodes, he was totally wasted.  Skinner had zero of any consequence to do in the entire six-episode season.  (As just one example, it should have been SKINNER with Scully in the finale trying to fight the escalating plague, not the silly Scully clone Agent Einstein.  OR it should have been Skinner with Mulder, facing off against CSM!)  Speaking of CSM, I was pleased to see him back from his apparent death in the TV series’ finale, as how could you have The X-Files without the Cigarette Smoking Man, but I wish we’d had more time with him.  While it was great having CSM back on the show, the final-season death that I’d really wanted to see undone was that of the Lone Gunmen.  They teased us with quick shots of these guys in Mulder’s drug freak-out in the penultimate episode, “Babylon”, but that was it.  That was a big disappointment for me.  The only other familiar X-Files face who we got to see was Monica Reyes in the sixth episode, and she too was totally wasted.  (More on Monica when I discuss episode six in-depth.)

OK, let me throw in one more complaint.  When The X-Files was redone for its recent HD blu-ray release, they re-did the opening credits but failed to properly match the original fonts of the original credits.  Sadly, this not-quite-right version of the opening credits was also used for these new episodes.  I wish someone behind the scenes had shown this show the love and attention it deserves and worked a little harder to get the opening credits right.  For more details about what I’m talking about, and screenshot comparisons, click here.

OK, enough negativity.  I don’t want my criticisms to outweigh my happiness at the existence of six new episodes of The X-Files, something that I never thought I’d ever see.  I can forgive the existence of a lot of other misguided reboots/relaunches if we occasionally get the return of a truly great show like The X-Files.  This six-episode mini-series wasn’t what I had hoped it would be, but I’m still glad it exists.  If we actually get several more seasons of new X-Files episodes, perhaps I will look back at this first six-episode block with more forgiveness.  We’ll see.  I’m hoping that we will get an announcement of another season of X-Files episodes soon.

I have a lot more to say about these six episodes, and I’ll be back soon with my episode-by-episode analysis.  I also have reviews coming up of The Americans season three, Agent Carter season two, and a bunch more movies.  See you back here soon, I hope!