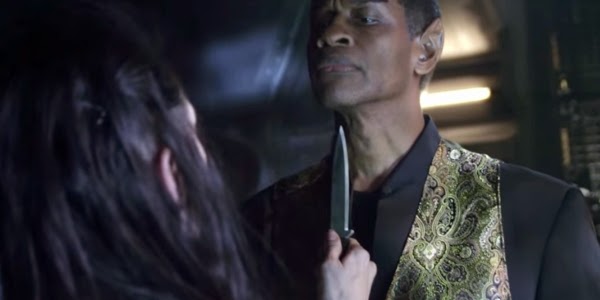 Though this is a slow period for new “official” Star Trek, there’s a lot of exciting, professional fan-made efforts happening.  I’ve written a lot about the two groups working on creating their own new episodes of the Original Series, new adventures of Kirk and Spock and the Enterprise.  Star Trek: New Voyages/Star Trek: Phase II (they seem to keep switching their name) has been doing this for over a decade, generally releasing one new episode a year.  (Click here for my review of their most recent finished episode, Mindsifter.)  Star Trek Continues is a newer group, and they just released their fifth episode, “Divided We Stand” — click here for my review.  Meanwhile, Alec Peters and the folks at Axanar created the incredible Prelude to Axanar short film (click here for my review, and watch it here now) and are working on a feature-length Axanar film, to star Richard Hatch, Tony Todd, Kate Vernon, J.G. Hertzler, and Gary Graham (all professional actors, and all incredibly talented performers whose names will be familiar to fans of Trek and Battlestar Galactica).

Which brings me to Tim Russ and his Renegade Productions.  Mr. Russ played Tuvok on Star Trek: Voyager, and several years ago he directed Star Trek: Of Gods and Men.  This was a feature-length film, released on-line in three parts, that starred actors from many different incarnations of Star Trek.  Walter Koenig reprised his role as Chekov, Nichelle Nichols reprised her role as Uhura, Grace Lee Whitney reprised her role as Janice Rand, and Alan Ruck reprised his role as Enterprise B Captain John Harriman (from Star Trek: Generations), and Mr. Russ himself once again played Tuvok.  A host of other professional Trek actors appeared in new roles: Ethan Phillips and Garett Wang from Voyager, Cirroc Lofton, Chase Masterson, and J.G. Hertzler from Deep Space Nine, and Gary Graham and Crystal Allen from Enterprise.  (Click here for my review of the film, and here for more information and to watch it yourself.)

Mr. Russ is now back at it again with the creation of Star Trek Renegades.  He and his team recently released their hour-and-a-half-long film, which they intend to be the pilot of a new series.  (Originally they apparently had a dream of pitching this to CBS — now the plan is to continue to release Renegades as a web-based series.)  Click here for the Renegades web-site, and here to watch the pilot episode!

Once again Mr. Russ has teamed with a group of professional actors.  Most notably, Renegades again features Walter Koenig as Chekov, along with Mr. Russ himself as Tuvok.  Several other actors from Voyager reprise their roles: Robert Picardo as Dr. Lewis Zimmerman, Richard Herd as Admiral Paris (Tom Paris’ father), and Manu Intiraymi as the former Borg drone Icheb.  Additionally, Trek veteran Gary Graham (who played the Vulcan Ambassador Soval on Enterprise, a character he reprised for Prelude to Axanar and the upcoming Axanar feature film) is back, playing a new character.  (Actually, not quite new — Mr. Graham played the same character, Ragnar — albeit an alternate universe version of him — in Mr. Russ’ previous Trek film, Of Gods and Men.) 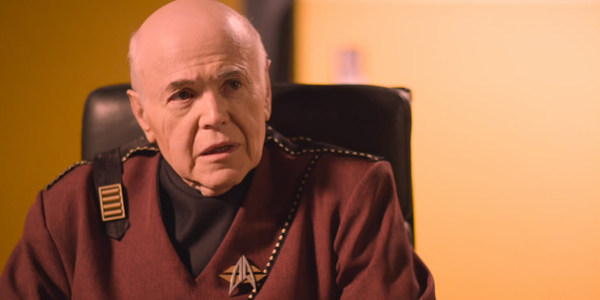 The story of Renegades is set several years after the end of Star Trek: Deep Space Nine and Voyager.  With Voyager’s having returned safely to the Alpha Quadrant, Tuvok is now the head of Starfleet’s covert operations branch, Section 31.  Pavel Chekov, meanwhile, remains a high-ranking admiral in Starfleet.  The two men together discover a new alien threat to the Federation, along with possible spies within Starfleet itself.  As a result, they turn for help to the crew of the Icarus, a group of outlaws and mercenaries with whom Tuvok has occasionally worked on covert operations.  It is the crew of the Icarus, comprised of newly-created characters (and also Manu Intiryami’s Icheb), who are the focus of this Renegades pilot, and the planned series going forward.

I wish I could say I liked Renegades more than I did.  On paper, there is a lot about the concept of this series that I like.  Flying in the face of today’s environment of reboots and prequels, this series aims to take the Trek story-line forward, beyond the end of the 24th-century-set TV shows.  I love that.  I love the mix of familiar Trek characters and new characters.  I like the show’s use of familiar Star Trek alien cultures along with new aliens.  I also like the general philosophical idea behind Renegades, of making Trek a little darker and grittier than it usually is.  I’m ready for a Trek show that isn’t set on the gleaming, polished bridge of a Federation starship, and I like the idea of exploring characters who are more flawed than our usual Starfleet heroes.

Unfortunately, in the execution of these ideas, I found Renegades to be somewhat disappointing.  There are some great actors in this ensemble, but I did not find myself all that interested in any of these new characters.  They all felt flat to me, without the depth of characterization that one needs to hook a viewer’s attention and cause us to invest in these new characters.  After watching Renegades I found myself hard-pressed to even remember any of the new characters’ names, let alone to feel that I learned much of anything about any of them.  The Icarus’ captain, Lexxa Singh, was a particular void.  She’s clearly supposed to be a rough-and-tumble new type of captain for a Trek show, and here again in theory I love the idea of giving us a really tough, spunky female character as the show’s lead.  But in execution I found I didn’t get to know Lexxa at all watching Renegades.  Who is this woman?  What is her past, what are her goals, what drives her?  I didn’t feel I really learned any of that, and I didn’t feel I was given any reason to care about her or to want to follow her further adventures moving forward.

The one stand-out among the new cast is Edward Furlong as the ship’s mechanic nicknamed “Fixer” — and I had to double check to believe that this was the same actor who’d played John Conner back in Terminator 2: Judgment Day!  I’m not sure what Mr. Furlong has been up to recently, but he does a great job here — he’s a spark of life amongst the otherwise dull Icarus crew.

The game group of actors are let down by the script, which stumbles in its attempts to dramatize an exciting new Trek adventure.  We’re not given nearly enough reason as to why Chekov and Tuvok become convinced that NO ONE within all of Starfleet can be trusted, thus forcing them to turn to the criminals on board the Icarus.  That’s the whole crux of the show, that the Icarus becomes the Federation’s only hope, but the script doesn’t sell that idea at all.  Instead, old Chekov and Tuvok just look foolish and out of their depth by being unable to come up with any other options other than using these criminals.  I also don’t at all like the way we see Tuvok manipulate Lexxa to do what he wants with the promise of his eventually revealing personal information that is important to her.  This is a cruel thing to do, not at all Starfleet-like.  (Both Picard and Sisko had great scenes on their respective Trek shows in which they made a point of offering information freely, even to potential adversaries, rather than bartering information to their advantage.)  I applaud Mr. Russ and the makers of Renegades for trying to create a new alien race to be the villains, but I’m afraid they failed to make those aliens compelling or interesting, and the ultimate plot that pits Earth in jeopardy doesn’t make much sense.  (Nor does the crew’s resolution.  Just how are the Icarus crew able to beam down to Earth through the planet-wide shield, anyway?? That’s just one of major plot points that don’t quite make sense.)

There’s no question that Mr. Russ and all of the talented men and women involved with Renegades, both in front of and behind the camera, have their hearts in the right place and a lot of love for Star Trek.  I adore their desire to create new and exciting Star Trek adventures.  I wish I felt that their finished product was more successful.  This wasn’t a pilot that leaves me breathless with anticipation for more adventures.  Still, I admire the Renegades team’s efforts, and I’d love for them to succeed in their plan to create a twelve-episode “season” of additional Renegades adventures.  I am here rooting for them.