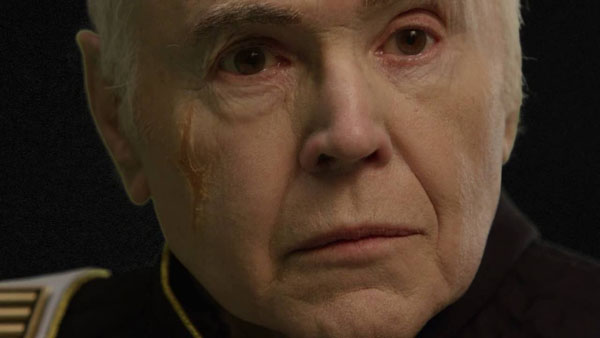 Tim Russ played the Vulcan Tuvok on Star Trek: Voyager, and I always felt his performance was one of the best things about that show.  Back in 2007, he was one of the early pioneers in the world of Star Trek fan films, directing the feature-length fan film project Star Trek: Of Gods and Men.  Looking back on it now, it certainly has an amateurish feel in some areas, but the project is drenched in a love for Star Trek, and it was super-cool to see so many actual Trek actors reprise their roles, or play new characters, in this story than spanned the Star Trek generations.  (The film featured Mr. Russ himself, along with Walter Koenig, Nichelle Nichols, Grace Lee Whitney, Alan Ruck, Garrett Wang, Ethan Phillips, J. G. Hertzler, Cirroc Lofton, Chase Masterson, and Gary Graham!  Click here for my review, and click here to watch it.)  I was excited that Mr. Russ was getting back into the Trek fan-film game with 2015’s Star Trek: Renegades, co-written by Ethan Calk, Sky Conway, and Jack Trevino.  The Renegades film was intended to be the pilot for a new “independent” Star Trek series, but I didn’t much care for it.  (Click here to watch Renegades yourself.)  However, I was intrigued that the second Renegades episode, called “The Requiem,” was announced as featuring the final performances of Walter Koenig as Pavel Chekov and Nichelle Nichols as Nyota Uhura.

I wish I could recommend “The Requiem,” in the way that I have sung the praises of other Star Trek fan-film projects such as Star Trek: New Voyages (also known for a while as Phase II), Star Trek Continues, and Axanar.  Unfortunately, while I wanted to like “The Requiem,” I was disappointed by the amateurishness of the whole enterprise (sorry) and the lack of anything resembling a coherent plot or interesting characters.

Walter Koenig was one of the first professional Star Trek actors to give his blessing, and lend legitimacy, to Star Trek fan films when he reprised his role as Chekov for the third episode of Star Trek: New Voyages, called “To Serve All My Days.”  That was a beautifully-produced fan-made episode, with a lovely story that provided what might have been the best dramatic work of Mr. Koenig as Chekov in all of Trek!  Few other “official” Trek installments gave Mr. Koenig as much of a spotlight as did that episode.  Take a look, I think the episode holds up extremely well.

Sadly, there is nothing on par with that here in “The Requiem.”  Mr. Koenig has a lot of screentime (Ms. Nichols less so), but none of his scenes mean anything, or have any dramatic weight.  The episode was meant to allow Pavel Chekov to go out in a blaze of glory, but it all just felt very silly to me.

That’s because little that happens in this episode makes any sense.  The setup of the story is that there is some vast conspiracy within the Federation, leaving Pavel with no one to trust but Uhura and the motley crew of “Renegades” who make up the show’s main cast. But we don’t actually learn how such a vast conspiracy came to be, or who they are, or what they want, etc.  It’s just a vast, nebulous EVIL that drives Pavel to do lots of ridiculous things.  The show doesn’t earn any of the stakes that it is trying so desperately to have, it just wants us to believe that somehow basically everyone within Starfleet has turned evil.  Then, when we actually get to Pavel’s Last Big Adventure, there are so many plot holes I don’t know where to begin.  We were told this is a vast conspiracy, but somehow destroying one starbase ends the threat forever?  The Renegades and one loyal Starship attack the starbase with no plan at all, and when someone comes up with the idea of a “diversion” they say it with such portent that its as if they expect you to a) ignore the fact that a hero creating a diversion has only been done before, oh, let’s say a MILLION times, and that b) the diversion makes no sense.  Why doesn’t the starbase’s sensors notice Pavel’s shuttle?  How does his shuttle get through the shields?  (What did that Andorian do to make this possible?)  How could one torpedo on one little shuttle annihilate a huge starbase?  None of it makes any sense.

I could forgive the plot holes if the characters were interesting and we had some good drama.  But no character on-screen has any depth.  The show kills off half of the Renegades crew who were introduced in the first episode.  Why?  Did none of them want to participate in a second installment?  Was this an attempt to give dramatic heft to this new story?  That fails entirely, because I barely knew or cared about any of those characters to begin with, so their deaths are meaningless bordering on silly.  Adrienne Wilkinson plays the Renegades’ captain Lexxa Singh, and while Ms. Wilkinson tries her best, she is given little to do in the episode other than brood.  There is no real character there.  The great Gary Graham (who played Soval in Enterprise) is fun as the mercenary Ragnar, but he has almost zero role in the story.  Every other new character is completely forgettable.  (I was disappointed that Edward Furlong, who was an unexpected surprise in the first Renegades episode, didn’t return, and so his character was one of those quickly killed off at the beginning of this second episode.)

But I didn’t come to this to watch the adventures of these new characters, so that fact that none of them are at all interesting wouldn’t matter much to me, if the episode gave Walter Koenig and Nichelle Nichols the farewell they deserved.  Sadly it does not.  As I stated above, though Walter Koenig has a lot of screen time, there’s not much that he actually does in the story other than stand around and say things that are supposed to be portentous.  His death is so silly that it fails completely at being the heroic finale the character so richly deserves.  And Uhura sadly has nothing to do in the episode at all.  I believe Nichelle Nichols’ participation came relatively late in the game, which is why she is not more involved in the plot.  (While Chekov goes off to save the Federation, Uhura stays home and does… well, nothing.)  I wish she could have at least been given one interesting, meaty scene.  (Her goodbye to Chekov is stiff and filled with dialogue you’ve heard many times before.)  Oh well.

“The Requiem” is also crippled by CBS/Paramount’s ridiculous new fan film guidelines, developed after they sued the planned fan-film Axanar out of existence.  (I wrote much more about this here.)  Although the first episode was called Star Trek: Renegades, and featured characters and ships/costumes/situations from Star Trek, after the Axanar lawsuit Mr. Russ and his team removed all references to Star Trek from this second (and, it looks like, final) Renegades episode.  And so this episode is filled with silly sound-alikes for familiar Star Trek names.  It’s the Confederation instead of the Federation.  Rigellians instead of Romulans.  Along with Mr. Russ (now playing Kovok instead of Tuvok) and Mr. Koenig and Ms. Nichols, several other Trek alumni reprise their roles, though all are also given new names.  And so Terry Farrell appears playing Jada instead of Jadzia (Dax); Robert Beltran plays Cordero instead of Chakotay, Manu Intiriyami plays Jirin instead of Icheb, and Aron Eisenberg plays Fnaxnor (!) instead of Nog.  (Cirroc Lofton also reprises his role as Jake Sisko, though I believe he is still called Mr. Sisko in the film.)  This kills half the fun of seeing these familiar Trek actors back in their roles!  The story of Terry Farrell’s character’s resurrection might be interesting if this was about Jadzia Dax, a beloved character killed off towards the end of Deep Space Nine’s run, but when it’s the backstory of “Jada,” I couldn’t bring myself to care.

Many of the already-created special effects shots had to be redone, to redesign the Federation and Romulan ships featured in the many outer-space visual effects.  This is a shame, as the visuals are great and it would have been cooler to have seen Federation and Romulan ships mixing it up, rather than the more generic-looking redesigns.  The costumes were changed, the familiar Starfleet insignia were removed and uniforms altered.  (The new puffy-looking version of a Starfleet uniform is terrible.)  Nog’s Ferengi makeup was altered to make him look like a different, never seen-before alien.  (Though there is still an “I’m all ears” joke left in, which is no longer a joke because the character no longer has huge Ferengi ears.  Sigh.)

All of these changes are a general bummer, because they soil the fun of seeing these actors back in these roles.  “The Requiem” would have been mediocre Star Trek, but it would have been more fun had it been Star Trek, rather than this generic stew that has been left.  Oh well.

I feel terrible slagging this episode and this series.  There’s no doubt that everyone involved in Renegades was doing it because they love Star Trek and they wanted to be involved in telling a new, different type of Star Trek story.  I wish I found the end result more successful, and I wish CBS/Paramount had allowed this to have remained a Star Trek fan film.  Though “The Requiem” didn’t do it for me at all, I applaud Mr. Russ and his team for their creativity and their efforts.  I wish them the best of luck in all their future endeavors.