Skip to the content
HomeWritten PostStar Trek: A Time For War, A Time For Peace 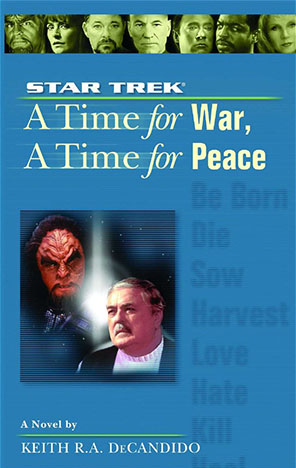 Keith R.A. DeCandido’s A Time for War, A Time for Peace is the ninth and final novel in Pocket Books’ “A Time to…” series, released back in 2004, that depicted the year leading up to the events of the final TNG movie, Nemesis.  I’ve been enjoying this series, and Mr. DeCandido’s book brings the story to a very satisfying end.

This might be my favorite book in the series, despite the fact that not much that seems that momentous happens in the book.  All of the big, actiony, universe-shaking stuff happened in David Mack’s A Time to Kill, A Time to Heal duology.  This novel feels like an epilogue to the series.  But perhaps that’s why I enjoyed it so much.  This is a much less intense book than Mr. Mack’s previous two, but that allows Mr. DeCandido room to explore these characters as we dig into the repercussions of the events chronicled in the previous eight books.

We hadn’t seen too much of Worf in this series so far, but this book gave him some great stuff, particularly the way he was able to single-handedly thwart a terrorist assault on the Federation embassy on Qo’noS.  It’s a great spotlight for Worf, the greatest warrior in the universe.  I knew that this series had to find a way to get Worf back into a Starfleet uniform, because that was where he was in Nemesis.  I hated that Nemesis, without explanation, erased all the development Worf had gone through on Deep Space Nine and seemed to drop him back into his TNG status quo.  I was worried in David Mack’s A Time to Kill, A Time of Heal books that this series was driving towards Worf’s having to leave Qo’noS because he’d been forced to betray Martok.  Thankfully, that wasn’t where this book wound up, as we see instead that Worf craves action over diplomacy.  It’s still disappointing to see the great end for Worf’s story in the DS9 finale “What You Leave Behind” undone, but this was about as well-done as I could have hoped.  However, I was disappointed that — despite Martok’s being on the cover of this book!! — we didn’t actually get to see Worf’s conversation with Martok, telling him that he was leaving to return to Starfleet.  I also still think it’s ridiculous that Worf’s hapless son, Alexander, was appointed Federation Ambassador to replace Worf.  (I knew this was the case from subsequent books.)  This kid was entrusted with one of the most important diplomatic positions in all the Federation?  It’s inconceivable to me.

There are quite a number of other story and character threads we follow throughout the book.  We see Riker attempting to recover from his torture at the hands of the Tezwans and prepare for his first command (of the starship Titan), while he and Troi negotiate with Lwaxana over the details of their wedding.  (Nemesis depicted Riker and Troi getting married in Riker’s home Alaska.  That Lwaxana was nowhere to be found was a huge gaffe in the film, which the book explains by depicting a compromise in which the couple would have a small wedding in Alaska followed by a lavish bash on Betazed overseen by Lwaxana.)  Riker offers Geordi the position of First Officer on the Titan, which Geordi, after much soul-searching over where he wants his career to go, eventually turns down.  (This helps to retroactively explain why, in Nemesis, when most of the rest of the Enterprise command crew seemed to be moving on, poor Geordi didn’t seem to have advanced any beyond where he was in TNG season two.)  We also learned in Nemesis that Dr. Crusher was leaving the Enterprise to oversee Starfleet Medical, so this book shows us the circumstances behind Beverly’s decision to leave the Enterprise.  (I was a little surprised that Crusher and Picard’s relationship seemed to have soured so quickly in this book, and it feels a little disrespectful to Dr. Crusher that her main reason for leaving the Enterprise might have been because Picard was too chicken to express his true feelings for her.  On the other hand, this is the hand Nemesis dealt, and luckily I knew that the Picard-Crusher relationship would be resolved in a far more satisfactory way in the follow-up Trek books set immediately after the events of Nemesis.)  In my favorite bit of Nemesis-cleanup, this book tells us exactly how Wesley wound up at Troi & Riker’s wedding in a Starfleet Lieutenant’s uniform.  (Thankfully, this novel clarifies that Wesley was still a Traveler, thus fixing what seemed to be another example of Nemesis ignoring previously-established character developments.)

There’s lots more even beyond all that in this book. The Enterprise, whose command crew have been on the outs with Starfleet Command since the events at Rashanar that began this series, is subjected to a detailed inspection.  This brings a few familiar faces back to the Enterprise, including Scotty and, in a deeper cut, Dr. Toby Russell (from the fifth season TNG episode “Ethics”).  Meanwhile, it’s also revealed that the Klingon emperor Kahless has been replaced with a hologram, leading to upheaval among the Klingons.

I wonder why Mr. DeCandido’s entry is the only one in this series that isn’t a two-novel duo.  Were two novels condensed into one?  Or was this the plan all along?  There certainly seems to be plenty of plot for two novels — though I also have no objection to the rapid pace of this entertainingly stuffed single novel.  (The only story that gets short shrift is the Kahless hologram mystery, which is solved by Data in two seconds, a rather too-easy a resolution for my tastes.)

I was very pleased that the novel’s final chapter takes place AFTER the events of Nemesis.  It allows us to get some closure for these characters that Nemesis didn’t provide.  Those final check-ins on most of the characters were some of my favorite pages in the book.  (Though, disappointingly, neither Troi nor Crusher are given a closing check-in.  I am baffled by this decision.  These two female characters were continually overlooked by the writers during TNG’s run, and I was very sorry to see that happen here, too.)

But other than that minor complaint, I loved this book!  This is exactly the type of Trek novel that I am looking for.  It’s got lots of compelling plot goings-on for all of our heroes, but at the same time it’s as focused (if not more so) on the characters and their personal stories.  And it’s able to weave together the tapestry of Star Trek continuity, bringing in many characters and references that make a long-time fan like me smile, without ever getting bogged down in that stuff and while also creating lots of new characters and situations.  Mr. DeCandido is a master of exactly this.  (Just look at all Nan Bacco and all the other great Federation politician characters introduced in this book!)

Of all the “A Time to…” novels, this is the one I’m happiest to have finally read.  But I thoroughly enjoyed this entire series.  I’m glad to have finally caught up with this important piece of the continuing Star Trek novel story…!