Skip to the content
HomeWritten PostStar Trek: A Time to Kill and A Time to Heal 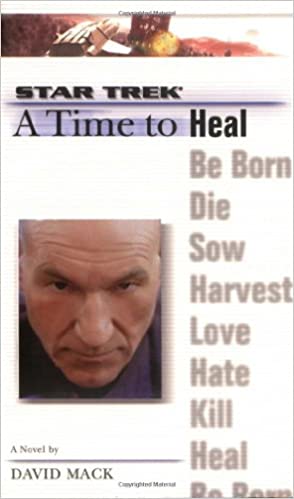 The penultimate duology, A Time to Kill and A Time to Heal, were written by David Mack.  These days, Mr. Mack has become one of the very best Star Trek novel writers; I was surprised to discover that this duology represented the first full Trek novels that he had written!  (He’d previously written a few Trek short stories and S.C.E. e-books.)  You’d never know it; these two books are completely polished and professionally-written.

Finally we’ve arrived at the events in this series that would have the most powerful repercussions in the Trek novels that would follow.  Although I’d never before read these books, I was familiar with the broad strokes of the events that took place therein, because these events would often be referred back to by other novels.  A planet on the Klingon border, Tezwa, has begun threatening the Klingons and threatening to annex a local system.  The Enterprise and a group of Klingon warships are sent to Tezwa to mediate the situation, and are promptly blown out of the sky by advanced planet-based defense weapons that the Tezwans shouldn’t have.  (The Klingon ships are destroyed and the Enterprise is badly damaged.)  It turns out that Federation President Min Zife and his chief of staff Koll Azernal secretly armed the Tezwans during the Dominion War, as a last-ditch defense against the Dominion.  If the Klingons discovered this betrayal by the Federation, it could start an interstellar war.  So Zife and Azernal have been endeavoring to keep the existence of the guns under wraps, but that plan went to hell when the crazed Tezwan Prime Minister, Kinchawn, used them to annihilate the Klingon starships.  Picard, not knowing any of this, attempts to keep the peace between the Tezwans and the Klingons, and also between the different Tezwan factions erupting into civil war following Kinchawn’s violent actions.  He must do this without Riker, who has been kidnapped by the Tezwans, who torture him in an attempt to extract information that will give them a leg up on Starfleet.  As the days turn into weeks, with more and more Starfleet officers killed every day as the violence on Tezwa escalates, Picard might not have any way out of the growing violence…

These two books are excellent, thrilling and intense.  Mr. Mack is excellent at writing Star Trek combat situations, and these two novels give him a chance to shine.  Almost the entire second half of the first book, A Time to Kill, is taken up by the story of six simultaneous commando raids that the Enterprise crew launch onto Tezwa, in an attempt to disable the advanced weapons before they can cause more damage to the fast-approaching Klingon reinforcements.  This is an extraordinary sequence, one quite unlike anything else I have ever before read in a Star Trek novel.  We follow the six groups on their missions, jumping in each short chapter from group to group and back again.  At first, as I read the first six chapters that introduced the teams as they began their mission, I feared this would be boring (we know they’re gonna succeed, right?) and repetitive (as, in that first go-round, we read each group doing pretty much the same thing).  But then Mr. Mack did something very clever, in that he jumped ahead by a few minutes each time he moved to the next group and chapter.  So we never read the same events twice — instead, we follow the progress of the mission from step to step, but jumping from each group as we do so.  The result is an incredible extended sequence, as we follow multiple characters spread out across a planet, engaging in a life-or-death, race-against-time mission.  Mr. Mack’s writing shows an incredible attention to detail, both in his depiction of the tactical strategy used by the Starfleet commandos and also in the way he developed a number of new Starfleet characters beyond the main TNG cast.

That’s a very memorable aspect of these novels.  Over the course of these two books, Mr. Mack developed a number of wonderful supporting characters, lower-ranked Enterprise crew-members who were engineers, security officers, medics, and more.  Sadly, tragically, most of these characters meet a bad end by the time the second book is over.  This approach helps give the story the epic scale it needs, while grounding it on a very emotional, personal level.  When Starfleet takes these losses, they hurt, because we’ve grown to know and love these characters.

And, wow, Starfleet takes some major losses over the course of these two novels.  Between the Enterprise and the other Starfleet vessels who arrive at Tezwa in the second book, we read that almost two thousand Strarfleet officers perish in the fighting on Tezwa when all is said and done.  It’s staggering and emotional to see Picard and co. take things on the chin like this.  We heard of losses of this scale on DS9 during the Dominion War, but we’ve never really seen the TNG crew take a hit like this.  This makes the story very powerful and memorable.  (Mr. Mack’s story really gets into the nitty gritty of what it’s like to be trapped in an escalating war of guerrilla and terrorist tactics.  Seeing this in a Star Trek setting is striking.  It reminds me a lot, in a favorable way, of the storytelling in Ronald D. Moore’s reimagined Battlestar Galactica.)

Riker’s ordeal as a prisoner on Tezwa, and Troi’s ordeal fearing for his life over the course of a long month, form a major emotional spine for the story.  We also get some meaty storylines for Picard, who is at once pleased to be back on an important mission after nearly a year on the outs from Starfleet Command (chronicled over the previous six books in this series) and his struggle as the Tezwa mission devolves into a quagmire.  Star Trek: Nemesis established that Dr. Crusher was planning to leave the Enterprise to take over Starfleet Medical.  Previous novels in this series have shown us when Dr. Crusher got that job offer, and this novel delved deeper into her conflict over whether to leave the Enterprise and accept the position, and also the increasing distance between her and Picard.  (That was one of the only elements of the book that didn’t quite work for me — I’m not sure Mr. Mack properly established why this sudden distance between Picard and Dr. Crusher had emerged.  I know Picard was peeved at Beverly for not telling him about the Starfleet medical job offer, but at the start of this book it felt like suddenly the two were at odds in a way they hadn’t been in the previous books; it’s as if we missed something major that happened off-screen.)  With Riker missing, Data steps into the role of Picard’s first officer, and it’s fun to see Data succeed so well in that role.  Geordi, meanwhile, winds up being a key player in figuring out the Federation cover-up whose fallout the Enterprise crew has unwittingly been swept into.

I enjoyed the way Mr. Mack developed the character of Enterprise security officer Jim Peart (who has also appeared in the previous books in this series), and his romance with Trill Conn officer cell Perim.  We knew that Perim, who was Conn officer during Star Trek: Insurrection, did not appear in Nemesis.  I love that these books have made a whole meal of explaining why she left the Enterprise command crew.  (Because of all the other casualties in this duology, I was sure that she and Jim were headed for tragedy — so I was delighted and relieved that they got a mostly happy ending…)

I liked seeing the Enterprise security officers using the TR-116 weapon, like the one used by Dax in the DS9 episode “Field of Fire,” that can fire through solid walls.

This duology was our best showcase so far for Enterprise security chief Christine Vale, who would go on to become a very important character on the Titan book series, where she serves as Riker’s first officer on the Titan.

I’ve been waiting for one of these “A Time to…” books to spotlight Worf, and I enjoyed A Time to Kill’s glimpse into Worf’s life as the Federation ambassador to the Klingon Empire on Quo’nos.  On the other hand, this Worf storyline was my least favorite aspect of the books.  I hated that Worf was put into a position where he had to betray Martok and the Klingon Empire in order to save his friends and crewmates on board the Enterprise.  I loved where Worf was left at the end of DS9, as brother to Martok and Ambassador to the Klingon Empire, and I hate that Nemesis undid all that.  So I knew and feared that this book series would have to find a way to pull Worf back to Starfleet.  I’d hoped they’d do that without driving a schism between Worf and Martok.  Martok somehow forgives Worf at the end of A Time to Kill (which I found hard to believe — Worf’s actions took honor and glory away from thousands of Klingon warriors by allowing the Enterprise to disable the entire Klingon fleet with the stolen command codes Worf had given them).  I am glad Mr. Mack ended the story with Worf and Martok still friends and comrades, but I don’t like the structure of the story that put Worf in this position of having to act dishonorably.  Oh well.

I loved the chapters that followed section 31 agents L’Haan, Dietz, and Zeitsev.  I liked the way Mr. Mack handled that, referring to their organization only as “the agency” until the very end, when he finally referred to them as Section 31 one single time.  Knowing where this story was going(from reading future Trek books), I knew immediately that these agents were in Section 31, but I still appreciated Mr. Mack’s approach here, keeping his cards close to his vest.  (I was, though, surprised at the end that the Section 31 agents were going to murder Zife, Azernal, and Quafina.  Did the other Federation admirals know about that?  I hope this is explored in the final book in the series.)

I loved the sequence at the end in which Picard, along with an assemblage of Admirals — Ross (from DS9), Nechayev (from a variety of TNG episodes), Jellico (from the two-part TNG episode “Chains of Command”), Paris (the father of Tom Paris from Voyager), and Nakamura (also from a variety of TNG episodes) — debate what to do about Federation President Min Zife, and ultimately decide to depose him.  Even knowing this was coming, this was an exciting chapter to read at the end of the second book, A Time to Heal, and I loved seeing those different characters from across the years brought together.

I am excited to conclude this series with A Time for War, A Time for Peace, written by Keith R.A. DeCandido!