Skip to the content
HomeWritten PostStar Trek: A Time to Love and A Time to Hate 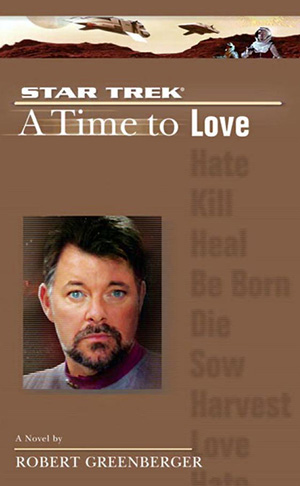 Robert Greenberger has written a variety of  Star Trek projects over the years, but he is best known to me as the editor of DC Comics’ wonderful Star Trek comic book series in the eighties/nineties.  I have warm memories of those comics (most especially Peter David’s long run on the main Star Trek series), and Mr. Greenberg regularly wrote/“hosted” the letters page, which I always loved reading.  It was a delight to read these two novels which he’d written!

These books were, I think, the shortest books in the series.  Mr. Greenberg’s writing style felt different to me than many/most other Pocket Books Trek novels.  For example, Mr Greenberg seemed to favor shorter scenes, with his chapters often jumping quickly from one character/location to another.  And he often summarized parts of conversations or other events, rather than taking the reader through those scenes in full.  It’s interesting to read a Star Trek novel written in something different from the usual “house” style.  That’s not necessarily bad, but the books were sometimes choppy and hard to understand.  There were several times reading these books when I had to stop and flip back a few pages to make sure I understood what was happening.  Sometimes there were apparent contradictions or discrepancies in the writing that I couldn’t figure out.  Here’s just one example: about 100 pages into book one, a second murder is reported and Riker is sent to investigate.  I expected him to arrive at a crime scene, but instead we read about a calm farm.  When Riker talks to the main witness, we read that the man “sat back and considered the question, summoning up memories of the events a few weeks past.”  A few weeks past??  I thought the second murder had just happened!  How can it have taken place weeks ago?  Why wasn’t it reported at the time??  If these questions were explained in the book’s text, I missed them.

(Frankly, the books contained several examples of what seemed to me like blatant mistakes that surely should have been caught during the editing process.  At one point, we read: “‘Chip off the old block,’ Kyle said sardonically.  He adjusted their angle and he was silent for a time, concentrating on flying.”  But Kyle and Will were WALKING!!  Their flyer had crashed a few pages previously!)

My favorite aspect of these books was that they picked up the thread of Will Riker’s father, Kyle, who was introduced in the second season TNG episode “The Icarus Factor”.  It was realistic and sad that this father and son didn’t magically heal their relationship in full after the events of that episode.

I liked Geordi’s storyline, in which he’s forced to deal with supply shortages as Starfleet struggles to recover from their heavy losses during the Dominion War.  Geordi winds up having to establish his own ad hoc system of supplies trading among the starships operating on the fringes of Federation territory.  It’s a bit reminiscent of Nog’s storyline in the great DS9 episode “Treachery, Faith, and the Great River,” but it’s fun to see these novels explore the effects of the Dominion War from DS9 on the TNG characters, and I like that everything wasn’t magically back to normal after the war.

I enjoyed following both Riker and Troi contemplating their history and where they are now (three years after their romance was rekindled during Star Trek: Insurrection) and where they are going.  It stretches credulity a bit that they haven’t progressed much in the three years since Insurrection, but that fits with the canonical timeline from the movies.  I am glad to see their relationship in focus in these books, since the movies made the weird decision to have them decide to a) remain in a relationship after they got it on during Insurrection and b) get married — two HUGE developments which both happen off-screen between movies.

I thought book two was a little weaker than book one.  I felt that stretches of book two feels repetitive, as we see scene after scene of Picard struggle futilely to get the planet’s governing council to make any type of decision, and Vale’s security officers beam down to put out some sort of fire and then get into mortal danger from the mobs of violent citizens, etc.  Also, I felt Picard was extremely out of character in not immediately telling the ruling council of the truth of how the planet had, in effect, drugged them, dulling their natural aggressiveness, the moment Dr Crusher discovered that shocking fact.  There’s a weak line about him not wanting to tell them about this discovery until he had a solution to the problem, but Picard had no way of knowing how long that would take or if it was even possible.  In the previous novel, Picard immediately informed the Dokaalan when Data’s scheme to use altered torpedoes to speed up their terraforming efforts failed miserably, even though at the time it looked like the Enterprise’s actions had doomed the Dokaalan people to extinction.  It seems very wrong to me for Picard to withhold the truth from the people affected here.

I loved the scene in which Troi summarizes for Vale the story of her and Riker’s early relationship on Betazed, with some fun references to Peter David’s depiction of those events from his wonderful novel Imzadi.

I laughed reading the book clarify that this was the point when Riker’s beard returned!  (He’d shaved it in Insurrection, but it was back for Nemesis.)

I’m not sure I buy that Picard and the Enterprise were still in the doghouse with Starfleet Command as this story opens.  The Starfleet Admiral Upton is ridiculously shortsighted and critical of Picard.  I’m not a huge fan of this continuation of the (annoying to me) tradition of dumb Starfleet admirals.

(Beware SPOILERS in this final paragraph.)  While Kyle Riker’s inclusion in the story was one of the things that most excited me about these books, I felt left down by his anticlimactic ending.  I was disappointed in the decision to kill him off, and doubly so in what felt to me like such a pointless manner.  He dyes ignominiously in a fight on the planet after the cure was already being pumped into the atmosphere.  That it was saving Riker doesn’t make it a heroic or noteworthy sacrifice, since the whole sequence of the Riker boys stopping to break up a scuffle feels so offhand and pointless.  In fact, Kyle’s involvement in the whole story felt sort of pointless to me.  In the end, I didn’t feel that much new ground was covered between father and son; it was basically a rehash of what we already saw in “The Icarus Factor”.  And I never understood any of Kyle’s actions.  How complicit was he in the dastardly plans of the villains, as revealed at the end?  If Kyle knew what was going on and wanted to stop it, why did he run off on his own and hide from everyone for days, while the virus and its accompanying violence spread across the planet, causing thousands of deaths?  Why not alert the authorities, or at least Starfleet, right away?  The book suggests that maybe Kyle wanted Riker to find him, by choosing to hide in a place that resembled their native Alaska.  But if that’s the case and he wanted to be found, why didn’t he directly contact the Enterprise as soon as he knew it was in orbit?  And how does Kyle’s hiding in a place like Alaska where his son could find him jive with what Kyle talked about with his pursuit of the first plague carrier, who had broken quarantine and started the whole mess?  None of this makes any sense to me, and it feels like an example of  the book’s overall choppy storytelling that I’d noted above.

Coming soon: my thoughts on the penultimate “A Time to…” duology, A Time to Kill and A Time to Heal, written by one of my favorite Star Trek novel authors: David Mack.