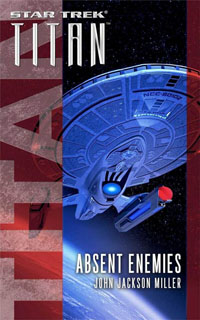 After enjoying the “Typhon Pact” e-book, The Struggle Within, I decided to move onto a more recent e-book, John Jackson Miller’s Absent Enemies.  This e-book was the first story to take place following the events of the five-book Trek novel crossover series “The Fall,” so I was eager to see how the Trek series would be moving fall following the dramatic, Federation-shaking events of those books.

In this story, the newly-promoted Admiral Riker and the crew of the Titan are called upon to settle a seemingly intractable diplomatic situation, one that we learn (in flashback) even Captain Picard had found insoluble two decades earlier.  On the world Garadius IV, two groups of alien settlers, the Ekorr and the Baladonians, have been warring with one another on and off for years.  But when Riker and the Titan arrive, they find that the entire population of Ekorr has vanished.  They initially suspect that the Baladonians have been guilty of a genocide, but the truth turns out to be much stranger.

Absent Enemies is a short, enjoyable story.  It doesn’t feel all that significant in the greater Star Trek story that is being told in Pocket Books’ interconnected Trek novels, but it’s a pleasant yarn that winds up having a fascinating connection to the Next Gen episode “The Next Phase.”  That was a rather silly episode of Next Gen, but I enjoyed the way Mr. Miller uses this story to ask some pertinent questions about the plot of that episode, and even better, finds some great in-Trek-universe possible explanations for some of the weird events of that episode.  I also enjoyed the way the story shows us Riker’s early attempts at finding his way now that he is an admiral, and to avoid being one of the many useless, full-of-themselves Admirals that we have seen over the years in so many Trek episodes.

I like Mr. Miller’s writing style; Absent Enemies has a light, humorous tone that is still able to give the story sufficient heft when things turn more serious in the second half.  (My favorite moment in the e-book is a brief bit of business at the beginning, in which Christine Vale, in command of the Titan, remarks that Tuvok is beginning to learn all of Admiral Riker’s facial expressions.  Tuvok replies: “That one I learned from Kathryn Janeway. I call it ‘full stop.'”)

By no means essential, Absent Enemies is an enjoyable tale and I am eager to move on to John Jackson Miller’s first full-length Trek novel, Takedown.