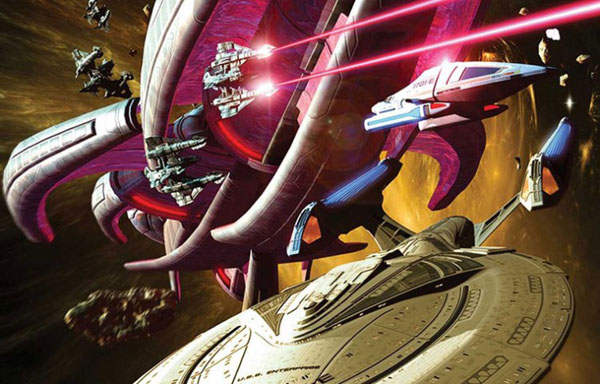 At the conclusion of the galaxy-reshaping events of 2013’s five-novel crossover series, “The Fall,” Captain Picard and the crew of the USS Enterprise E embarked on a new mission of exploration and discovery.  In Dayton Ward’s excellent novel, Armageddon’s Arrow, Picard and his crew stumble into the middle of a war between two neighboring alien races, the Golvonek and the Raqilan.  The Enterprise encounters a gigantic, planet-destroying super-weapon, sent from the future by one side to annihilate the other.  While Captain Picard hopes that the discovery of this weapon might spur the two sides to come to the negotiating table and pursue peace, rather than this future of mutual annihilation, he instead finds a situation quickly threatening to spiral out of control as both sides seek to gain control of the super-weapon and its secrets from the future.  An already difficult situation is further complicated as Picard weighs his obligations to his oath of non-interference, his responsibility to protect the timeline, and his guilt at the Enterprise’s role in discovering the super-weapon.  Is there any way out of this impasse?

While I was somewhat disappointed by the first stand-alone post-“The Fall” novel, Takedown, Dayton Ward’s Armageddon’s Arrow shows ’em how its done.  While Armageddon’s Arrow is (like Takedown) also a stand-alone adventure with a new sci-fi mystery/situation for Picard and his crew to unravel, it’s successful because not only is the new sci-fi situation rewardingly rich and complex as it unfolds, but because the novel also focuses deeply on the characters, exploring many of the crew-members of Picard’s Enterprise E and moving their stories forwards.

While familiar characters such as Captain Picard, Doctor Crusher, Worf and Geordi are very much front-and-center in the novel, Armageddon’s Arrow takes the time to shine a spotlight on many other members of the Enterprise crew, most of who have been created for Pocket Books’ post-Nemesis-set Trek novels from the past decade-plus.  We see the part-Vulcan first-contact specialist T’Ryssa Chen struggle with her feelings of uselessness on board a starship that has, for years, been engaged in local political struggles rather than exploring strange new worlds, and also with her conflicted feelings toward Lieutenant Commander Taurik (a character introduced in the TNG episode, Lower Decks who has been enjoyably fleshed out in these post-Nemesis novels) as well as the Betazoid security officer Rennan Konya.  We see the progression of Geordi’s relationship with the doctor Tamala Harstad, introduced back in Paths of Disharmony (she and Geordi have moved in together as the novel opens), and I was pleased to see Dr. Harstad also get involved in the story as more than just geordi’s love-interest, as she is a member of the way team that finds itself in jeopardy on board the super-weapon.  The Enterprise’s relatively new chief of security Smrhova gets some attention, as does science officer Dina Elfiki and security officer Kristen Cruzen.  I love this attention to detail, and the sense that this crew of the Enterprise E is being developed with care as these novels continue.

But our regular main TNG characters are not ignored either, as we get some nice scenes showing how Captain Picard and Dr. Crusher are experiencing life as married parents on board a starship. (There’s a wonderful little bit of business in which we learn why Captain Picard doesn’t immediately introduce Dr. Crusher as his wife when making contact with new aliens.)  We see several examples of how far Worf has come since his TNG days serving as a younger officer under Captain Picard, and how capable and measured he is as the Enterprise’s first officer.  And we see Geordi, weighing his decisions to have spent so much of his life and career on board the Enterprise.

None of these are major plot points in the novel, but all factor into the story at one point or another, helping to give the story its richness.  While the main sci-fi story of Armageddon’s Arrow is a stand-alone affair, this focus on character allows the novel (unlike Takedown) to feel integral to the larger story being told across these many new Trek books.  If this is the type of TNG novel we’re going to get for the forseeable future, now that the ship has left Federation territory to once again head out to explore the unknown, I will be perfectly happy with that.

Armageddon’s Arrow has many nice references to Trek continuity, both official on-screen continuity and that established by the novels.  I was impressed by the way Mr. Ward incorporated nods to the whole history of Trek, from a  Classic Trek episode (whose name I will not reveal here for fear of spoiling a twist late in the novel), to events from Enterprise (specifically, the Xindi arc, including a great piece of commentary on the stupidity of the Xindi’s tipping their hand by attacking Earth with a prototype weapon months before their world-destroying mega-weapon was ready, a huge plot whole in that whole season-long story), to the Department of Temporal Investigations introduced in Deep Space Nine’s “Trials and Tribble-ations”, and even a wonderful, welcome reference to Peter David’s brilliant Trek novel Vendetta ( which is one of my very favorite Trek novels of all time).

Everything in the story wraps up beautifully at the end, except for one intriguing plot-thread about Taurik’s discovering some piece of important information about a future event, which he quarantines from the rest of the Enterprise command crew and then reports to the DTI.  I assume this will be followed up on in a future novel.  I am very curious to see where that story goes.

I also have to single out for praise the gorgeous cover, created by Doug Drexler.  Mr. Drexler is a special-effects wizard who worked on many of the Trek series as well as other great sci-fi TV series, and he’s been creating some wonderful cover images for the recent Pocket Books Star Trek novels.  His depiction of the super-weapon feels a little inspired by Babylon 5, but I really like it as it has an unusual-for-Trek look to it.  The cover is a magnificent piece of work, a really cool, exciting image of sci-fi action that sets a wonderful tone for the book.

Overall, Armageddon’s Arrow was an excellent novel.  I’ll be back soon with my thoughts on the next Trek novel, the DS9-focused Force and Motion.