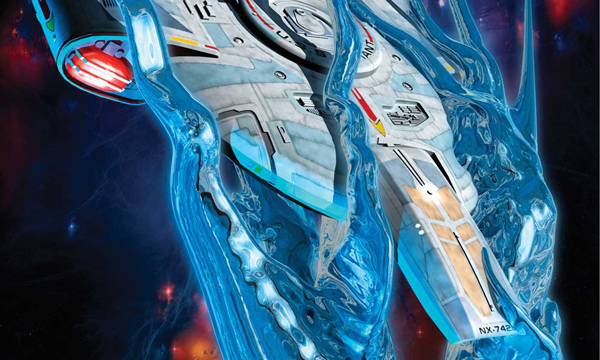 I loved Sacraments of Fire, the first half of David R. George III’s new Star Trek: Deep Space Nine duology, and I’m pleased to say that the second book, Ascendance, is a strong conclusion to the story!

Ascendance picks up right where Sacraments of Fire left off.  The crazed Iliana Ghemor (the Cardassian Kira Nerys look-alike from the DS9 episode “Second Skin”, who has been brought back as a major player in the post-finale DS9 novels) is leading the Ascendants, a fearsome race of interstellar religious zealots, in a crusade to destroy Bajor.  The planet’s only hope: the Jem’Hadar Taranatar.

Whereas Sacraments of Fire bounced back and forth around the timeline, this novel is presented in a more linear fashion.  The first half of the novel is set in what had been the missing years of the DS9 saga: after the events of 2009’s The Soul Key but before the events of David Mack’s Destiny trilogy.  The second half of the novel is set seven years later, in the “present day” of the current Trek novels’ continuity, taking place after the Federation-shaking events of last year’s The Fall five-book series.  It’s interesting that Mr. George chose such different structures for the two books in this duology.  I’m not sure which approach I prefer.  They both work for their respective books.

As I commented in my review of Sacraments of Fire, it is an enormous delight to see these novels finally go back to fill in the years of the DS9 story that got skipped when the entire Star Trek novel series jumped several years ahead of where the DS9 story was unfolding with David Mack’s excellent Destiny trilogy.  I had almost abandoned hope that the books would ever go back and fill in those missing years, so this two-book series was a delight.  (I detailed in my review of Sacraments of Fire the many old plot-lines from previous books that Mr. George so carefully picked back up and wove together in this wonderful new duology.)

I loved how these two novels carefully helped catch readers up on how all of the DS9 characters got to the places we saw them in Mr. George’s 2011 post-Destiny novel Rough Beasts of Empire.  Several years after that at-the-time-controversial novel (at least it was controversial to me, because of the very surprising places it took many of the DS9 characters), I have accepted and taken for granted many of those changes.  So it was an unexpected pleasure to get to actually see here, in this novel, just how and why Kira decided to leave military service to pursue a life as a Vedek (not to mention how she became friends with the Ascendant Raiq), and to see how and why Dax decided to leave DS9 and pursue the command of a starship, and many other character choices and developments.  I loved all of the time spent in this book on those character moments.

I was particularly delighted to finally get, here in Ascendance, a satisfactory ending to Taranatar’s story, as well as the story of Iliana Ghemor and the Ascendants and the mystery of the Progenitor.  At last, we finally know what exactly happened to the the enormous shapeshifter Founder god the Progenitor, as described so mysteriously way back in the novella Olympus Descending from the Worlds of Deep Space Nine novel series.  Ten years is a long time to wait but I am so happy to now have the answers to what went down in that enigmatic tale.

While this duology was incredible in the way it went back and filled in so many of the missing pieces of the years skipped when the Trek story jumped ahead a few years past The Soul Key with the Destiny trilogy, the one big story not addressed here was the tale of Rebecca Sisko’s kidnapping.  That event has been mentioned a lot in Mr. George’s recent DS9 novels, and I’d really expected that to be addressed here, particularly when the fanatical Bajoran Ohalu followers were brought into the story.  I do hope we get the full story of what happened with Rebecca someday soon.

After bringing Dezavrim and the Even Odds crew back into the story in the last book, it was also surprising, and rather disappointing, not to to get a single scene with any of those characters in this book.  In Sacraments of Fire, Mr. George took the time to reintroduce the Even Odds characters (last seen so long ago, way back in S.D. Perry’s Rising Son), so I’d expected them to be major players in the story being told.  But that didn’t wind up happening at all.  What happened to Dez and his crew after the loss of their ship?  What did they feel about Taranatar’s actions?  I wanted to learn more about that.  I hope we see these characters again.

I loved the way Mr. George crafted his story so as to explain what the heck the deal was with that planet in wormhole from the DS9 pilot.  I always thought it weird that DS9 never again addressed the existence of that planet that Sisko and Dax had found within the wormhole.  I love Mr. George’s take on that here in Ascendance.

I enjoyed how Sacraments of Fire and Ascendance gave a nice bit of focus to Ro Laren, the current captain of DS9.  In particular, I enjoyed how Mr. George reminded us of how Ro was first introduced, as a Bajoran non-believer who wore her earring on her wrong ear as a way of acting out.  (OK, that last bit was some retroactive continuity-fixing done by the Trek novels to explain the continuity inconsistency between Ro’s first appearance on Next Gen and the later fleshing-out of the Bajorans done on Deep Space Nine, but still, I loved that Mr. George used this aspect of Ro’s personality and character history in an important way in this story.)

One thing that threw me somewhat about Ascendance, particularly at the beginning, was how the Kira who’d been sent into the past by the Prophets — who was one of the most central characters of Sacraments of Fire — totally dropped out of this book.  Sacraments ends on a cliffhanger as we see Kira rush into the wormhole chasing after Iliana Ghemor and the Ascendant fleet, but then she’s not at all involved in this book.  That confused me as I read the first 100 pages.  I kept having to check to confirm that the Kira being mentioned wasn’t the present-day Kira but the Kira of that time, seven years prior to the current novels’ continuity.  It’s not until the very, very end of Ascendance that the present-day Kira re-enters the tale.  I guess we’ll have to wait until the next DS9 novel to see where her story goes.

In fact, while Ascendance is satisfying, the book end with quite a lot left hanging.  The fate of Vic Fontaine.  The location of Morn.  What will happen on Bajor with the crisis of faith prompted by the revelation  of the “falseworks” on the moon of Endalla.  What will happen next with Altek Dans — why has he been sent to this time? — and his relationships with Ro and Kira.  I’ve been waiting for years now for an Odo/Kira reunion and hope that won’t be put off for too much longer.

This is the pleasure and curse of an ongoing series of novels.  I am eager for some of these stories to be resolved, while I also love that these books make up a continuing saga and that Ascendance is clearly not the end of these DS9 stories.

By the way, speaking of my continuing to hope for an Odo/Kira reunion, it’s interesting to note, how Mr. George and the other writers seem to have rejected many of the character pairings left by the DS9 finale.  They broke up Bashir and Dax right away, and Mr. George even separated Sisko and Kassidy for a while, though thankfully that has been wrapped up.  I understand the idea of respecting the DS9 finale by keeping Odo and Kira separated, but I think it’s time to bring the two characters back together, as it’s started to feel like writerly contrivances keeping them apart now (Odo returns to the Alpha quadrant just as Kira is lost in the wormhole) rather than legitimate character reasons.

Speaking of relationships, I was bummed that Mr. George ended the Ro-Quark relationship.  I have loved that relationship, it’s been one of my favorite story developments in the post-finale DS9 books.  I thought Ro and Quark were such a surprising but also perfect pair.  I’m bummed that Ro seems to have dumped Quark in favor of the more traditionally handsome, “normal”-looking Altek Dans.  I’m also a little surprised that, so soon after Mr. George worked to get the readers invested in an Altek-Kira romance (in Revelation and Dust) that now it suddenly develops that Altek is in love with Ro.  Hooking Altek up with both of DS9’s strong, single Bajoran women seems a little, I don’t know, overly convenient I guess.  We’ll have to wait until the next book (hopefully!) to see Altek Dans’ reaction to learning that Kira Nerys is alive.  I am eager to see that, but I also hope this isn’t leading into an Altek-Ro-Kira love triangle, as that’s not the type of story I have a lot of patience for.  We’ll see.

I was also interested to see that this novel sends Sisko and the Robinson off on their mission of exploration.  I hope we get to follow Sisko’s adventures in future novels, and that they still find a way to connect him to the continuing DS9 story.

I have huge praise for David R. George III for this two-part novel series of Sacraments of Fire and Ascendance.  I am thrilled that such a major missing piece of the Trek novels’ post-finale DS9 story-line has finally been filled in.  It’s very cool how Mr. George seems to have become the primary shepherd of the continuing DS9 story.  He’s created a very compelling DS9 story that has woven through Rough Beasts of Empire, Plagues of Night and Raise the Dawn, Revelation and Dust and now these two novels.  I can’t wait to see where this saga, and all of these wonderful characters, goes next.