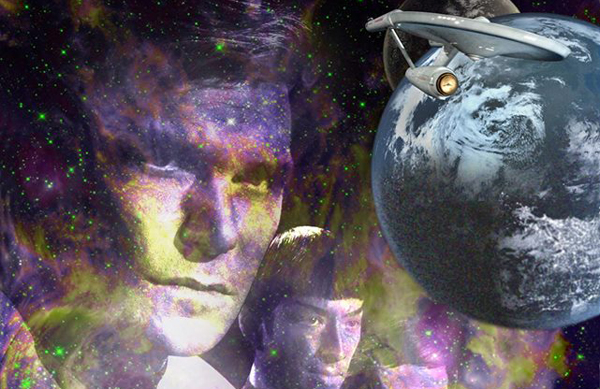 Star Trek Continues is an impressive fan film production, creating full-length episodes that are intended to serve as the never-made fourth season of the original Star Trek.  I love these episodes.  The talented folks at Star Trek Continues are keeping Star Trek alive!

In “The White Iris,” the fourth episode of Star Trek Continues, Captain Kirk suffers a severe head injury while negotiating with a new planet that is set to join the Federation.  Doctor McCoy uses an experimental medicine to heal Kirk’s injuries, but the procedure has an unexpected result: the unravelling of the mind-meld that Spock had used to erase Kirk’s memory of the death of Rayna in “Requiem for Methusaleh.”  This in turn brings up Kirk’s repressed grief for the many women he has loved and lost over the years of his career.  Overwhelmed by visions of these dead women, Kirk seems unable to stave off the escalating violence between the planet and its aggressive neighbor world.

As always, the production values of Star Trek Continues are incredible.  The episode looks and sounds exactly, and I mean exactly, like a real episode of the Original Series.  The costumes are perfect, from the Enterprise crew uniforms to the look of the new aliens introduced in this episode.  The sets are perfect, from the bridge to sickbay to the transporter room to the Enterprise corridors.  There is not an off-note anywhere to be seen.  My jaw is on the floor at the way the sets from the Original Series have been so perfectly replicated.  I mean, look at the pattern on the red pillows in sickbay!  They are perfect!!

There aren’t too many visual effects in this episode, but what effects we see are fantastic.  The Big E looks gorgeous, as has been the case in all of these Star Trek Continues episodes.  I love seeing the original Enterprise reproduced so gloriously using CGI.  The see-through effect on the women in Kirk’s visions is well-realized, simple and effective without becoming silly.  I was also particularly impressed by the score in this episode, which wonderfully channels the sound and feel of Classic Trek.

I like the main story of this episode very much.  It’s nice to see the show taking a look into the internal emotional life of our hero, Kirk.  It’s also fun to see the modern sensibility of continuity brought to an Original Series story.  The original Star Trek almost never referred back to a previous episode.  But for modern viewers, there are so many Original Trek episodes that feel, today, like they demand follow-up.  So it was a great thrill in this episode to see so many important women from Kirk’s like brought back to our attention.  It’s huge fun to see Rayna, Edith Keeler, and Miramanee again, and I am hugely impressed at how perfectly re-cast all three women were.  These actresses (Tiffany Brouwer, Gabriela Fresquez, and Adrienne Wilkinson) look just like the original characters, and each proves more than able to handle their emotional scenes with Vic Mignogna’s Captain Kirk.  I also enjoyed seeing the new character (played by Nakia Burrise), a woman Kirk had loved and lost on the Farragut (whose demise was the subject of the Original Series episode “Obsession.”)  There are a lot of other fun nods to Trek continuity in this episode, as we get references to Tycho IV and the Xindi and the Vulcan katra.  I was also please to see both Lt. Palmer and Lt. Smith again.

The entire Star Trek Continues cast acquits themselves well.  The episode is clearly a showcase for series creator Vic Mignogna, who plays Kirk.  He does a great job, and in particular he has some great scenes with Todd Haberkorn as Spock.  I love the scene between Kirk and Spock in the turbolift, in which Kirk reveals to Spock that he remembers what Spock did to erase Rayna from his mind.  I’d love for future episodes to give a little more time and attention to the other members of the Enterprise’s crew: Scotty, Sulu, Uhura, and Chekov.  It’s true to the Original Series for Kirk, Spock, and McCoy to be the focus of every episode, but as a modern viewer I’d love to see more attention paid to the entire ensemble, all of whom seem strong in the small glimpses we get of them.

I also think the show needs to improve how they incorporate Michelle Specht, who plays the new, created-for-the-show character of Enterprise counselor Lt. McKennah.  This is an episode in which McKennah would logically be a main character, and yet because Kirk’s character is one who wouldn’t be comfortable talking to a psychiatrist — something the episode’s script accurately reflects — one can clearly see the writerly struggle of how to involve McKennah in the story.  In the end, she gets just one big scene with Kirk, and as I’d feared would happen, she’s able to suggest a solution to his psychological trauma far too quickly.  If this is the direction the episode wanted to go, then that development deserved more time to explore, rather than one quick scene.

The weakest part of the episode is the set-up.  The whack on the head that Kirk suffers doesn’t play as a serious enough injury to cause such trauma, and everything about McCoy’s magical drug cure and Kirk’s lightning-fast physical recover is way too silly and implausible.  Kirk goes from almost brain-dead to hopping up out of bed and back to duty in about thirty seconds.  Also, I didn’t love how we spend the entire first half of the episode waiting for everyone to figure out what’s wrong with Kirk, without ever actually getting a satisfactorily concrete answer.  This is despite the episode’s opening clearly setting up what would have been a great explanation for the mental turmoil Kirk from which is suffering: some sort of adverse effect to the sudden reversal of Spock’s mind-meld.  That could easily have been used to explain why suddenly all this other buried emotional baggage from Kirk’s past is being dredged up.  I’m not sure why the show didn’t follow-through on that set-up and just give us that straight explanation.

I also have to confess that, once the story of the episode is clearly set-up — internal threat from Kirk’s buried memories, and external threat from the two warring planets — I found the second-half of the episode to be a bit slow.  Each of the individual scenes between Kirk and the women from his past work.  It’s just that one after another, they get a bit boring.  Once we know that Kirk has to make peace with each of these dead women, watching it actually happen doesn’t have a huge amount of drama.  Similarly, the external threat is a little weak.  It’s hard to believe the Enterprise can’t stop a bunch of missiles from a fairly primitive world.  Speaking of which, I would have loved had the whole story of these twin planets, one of whom is apparently being accepted into the Federation, been fleshed out a little more.  As it is, I was a little surprised that the Federation would accept for membership a world at war with its planetary twin.  It would’ve been nice had that aspect of the story been given a little more detail.  It’s fun seeing former Dr. Who Colin Baker, but he’s not given much to do in the episode.

It was great to see the return of the Enterprise’s primitive holodeck, first introduced in the opening scene of Star Trek Continues’ first episode!

The identity of the little girl is clever and poignant.

I loved hearing Marina Sirtis as the voice of the Enterprise computer!

The explanation of the episode’s title is clever, albeit delivered in something of an on-the-nose manner.  Maybe instead of having Spock and McCoy spell it all out for us, we could’ve seen a flashback of a young Kirk seeing that painting for the first time, or something like that?  It’s a great idea for the title of the episode.  It’s just that it could have been presented to us a little more subtly.

Truly, these episode is huge fun for a Star Trek fan to watch.  As always in my analyses of these fan-made episodes, I am approaching them with the seriousness I would when evaluating any new professionally-produced Star Trek episode or film.  That’s a testament to how good Star Trek Continues is.  Don’t let my minor criticisms of the story suggest that this episode isn’t wonderful.  “The White Iris:” was made by fans, but this is of the quality of any official professional effort.

I love watching these episodes, and I wait with enormous eagerness and anticipation for the next one.  Way to go, Star Trek Continues!  You are keeping the flame of Star Trek alive and well!