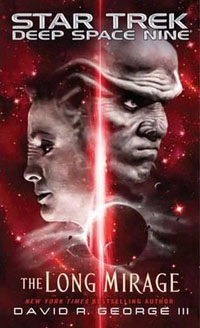 David R. George III’s latest novel, The Long Mirage, picks up exactly where his terrific DS9 duology Sacraments of Fire and Ascendance left off.  Religious unrest is spreading across Bajor with the discovery that the moon Endalla appears to have been artificially constructed as an anchor for the wormhole, casting doubt as to the divinity of the Prophets.  A Bajoran man, Altek Dans, has apparently been brought forward by the Prophets from thousands of years ago, in the past, but no one knows why.  Kira Nerys, thought lost in the wormhole, has also returned, only to discover that Altek is the man who fell in love with her when she was sent to the past by the Prophets (as seen in Revelation and Dust).  Why have both Kira and Altek been returned to Bajor at exactly this moment in time?  Meanwhile, Quark has hired an investigator in an attempt to locate Morn, missing since the destruction of the original DS9 two years earlier (at the end of Mr. George’s novel Plagues of Night), but now that investigator has apparently run off with Quark’s money.  So Quark sets out to track her down, and hopefully also locate his missing friend Morn, with Captain Ro along for the ride, just at the moment that Ro and Quark’s decade-long relationship has come crashing apart.  Finally, Nog’s attempts to restore the program of his holographic friend Vic Fontaine reaches a desperate hour, as Nog discovers he has only days before Vic’s program is corrupted and irrevocably lost.

David R. George III has, over the past few years, become the main story-teller of the continuing Deep Space Nine saga.  His recent novels — from Rough Beasts of Empire (part of the “Typhon Pact” series) to the duology Plagues of Night and Raise the Dawn, to Revelation and Dust (part one of the five-part crossover series “The Fall”) to the duology Sacraments of Fire and Ascendance, and now to The Long Mirage — all connect together to tell a thrilling, expansive Deep Space Nine saga that hopefully is far from over.  (Actually, Mr. George’s tale seems to have started all the way back in his contribution to the “Worlds of Deep Space Nine” series, the novella Olympus Descending.)

Mr. George has a mastery of the Deep Space Nine characters, and it’s wonderful to see the characters and story-lines from DS9, the greatest of the Trek TV shows, continuing on in such an engaging fashion in these stories set far beyond the events of the DS9 finale, “What You Leave Behind.”

In many ways, The Long Mirage functions as something of an epilogue to Mr. George’s past several books.  His recent novels have been huge, epic tales.  Sacraments of Fire and Ascendance wove together numerous story-lines from the previous decade and a half’s worth of Star Trek novels, finally depicting important events that had been hinted at for years in various other books (including the Ascendants’ attack on Bajor, and Taranatar’s fate).  The Long Mirage is a much smaller-scale novel, and two of its three main story-lines — Quark’s search for Morn and Nog’s efforts to repair Vic Fontaine’s program — focus on characters who had not been major players in the previous DS9 books.  It’s wonderful to see Quark and Nog and Vic, and even Morn, given the spotlight here in this novel, and I enjoyed seeing these long-simmering story-lines finally brought to the fore.

The idea that Nog has to actually go into Vic’s program in order to set the program right is a classic sort of Trek idea, and it’s fun to see Nog on another adventure inside Vic’s holo-program.  Vic is a hologram, but he’s still an important DS9 character, and after being on the sidelines for so long in these books (many years’ worth of time here in the “real world”) it’s nice to see Nog and other characters concerned about him, and willing to invest themselves in setting his program right.

The ultimate resolution of Morn’s disappearance — where he’s been and what he’s been up to — is satisfying, and I enjoyed the way Morn’s story-line unexpectedly tied into another of the book’s story-lines.  (I will also pat myself on the back to say I guessed correctly that an unnamed character who appears early in the novel was Morn.  Once I realized that the character didn’t utter a word of dialogue, I knew!)  I was also glad to see the status of Quark and Ro’s on-again-off-again relationship finally clarified, though I was sorry to see that meant the apparent end of their romantic relationship.  I’d grown to love the out-of-left-field relationship that had developed between Quark and Ro in the first year or two’s worth of post-finale DS9 novels, and I’m sorry that relationship has been cast aside.  I’m not sure why Mr. George made that choice.

The set-up of this novel also promised to bring to a head the complicated web of romantic relationships that has developed between Odo and Kira and Altek Dans and Ro.  We knew that Kira and Dans met and fell in love some time in the long-distant past, when Kira was sent there for reasons unknown by the Prophets (as seen in Revelation and Dust).  At the end of that novel, Altek Dans appeared in the present-day, while Kira was still lost within the wormhole.  With Kira missing, Ro and Dans had fallen into the beginnings of a relationship.  Meanwhile, of course, the Odo-Kira love story was a central relationship throughout the run of DS9, though they’d been mostly separated ever since the events of the DS9 finale.  Recently, Odo had returned to the Alpha Quadrant, but at around the same time as Kira was lost in the wormhole in Raise the Dawn.

I was eager to see some of these relationships come to a head in this novel.  I was worried, at first, because although we knew Kira had returned on the final pages of Ascendance, at the start of this new novel we see that Odo, even though he’d been waiting two years for Kira’s return, winds up sent away on a mission to intercept a Jem’Hadar warship heading towards the wormhole from Dominion territory in the Gamma Quadrant.  Also, for almost the first hundred pages of the novel, Kira and Dans remain unaware of each other’s presence in this timeline, and on board the station.  How long were all of these story-lines going to be stretched out, I wondered!!  Thankfully, though there are many moments in which Mr. George seems to enjoy teasing the audience, we do get forward movement on all of these story-lines in this book.  The scene in which Kira and Dans first see one another is a winner.  Mr. George doesn’t turn the novel into a soap opera — Kira flatly states at one point that she’s not interested in a love triangle, and clearly neither was Mr. George.  On the one hand this is a relief, as all of the characters behave like adults.  (For the most part.)  On the other hand, I was surprised that Mr. George didn’t wring a little more drama out of this juicy confluence of romantic relationships.  Once Ro leaves on her mission with Quark, and Dans and Kira head to Bajor, a lot of the romantic tension is diffused because the characters have gone their separate ways.  Speaking of “separate ways,” I was worried, as the book neared its end, that Mr. George was going to keep finding more plot-device ways to keep Kira and Odo separated and unaware of the other, but thankfully we got to see their long-awaited reunion before we were entirely out of pages.

Whereas many of Mr. George’s previous DS9 novels ended on a cliffhanger, The Long Mirage provided a satisfactory wrap-up.  If this is the conclusion to Mr. George’s saga, then I am satisfied.  That being said, I hope we are far from the end of Mr. George’s forays into the DS9 universe.  There is lots more story to tell, and many characters who I am eager to continue to follow to further adventures.  What is the future for Odo and Kira?  What is the future for Quark and Ro?  What will become of the new colony of Dominion refugees?  What has been happening back in the Dominion with Laas and the others since Odo left two years earlier?  While the schism within the Bajoran religion be healed?  What will become of Altek Dans?  After this book’s spotlight on Quark and Nog and Vic and Ro and Kira, I am eager to see what’s been happening with many of the other DS9 characters, such as Chief O’Brien and Keiko, Prynn Tenmei and Shar, and many other major and minor characters who have been developed over the past many Trek novels.

For Deep Space Nine fans who have been following this continuing story in Pocket Books’ Trek series, The Long Mirage is not to be missed.  I tore through it, and I can’t wait for Mr. George’s next visit to the Trek sandbox.