Skip to the content
HomeWritten PostStar Trek: Department of Temporal Investigations: The Collectors 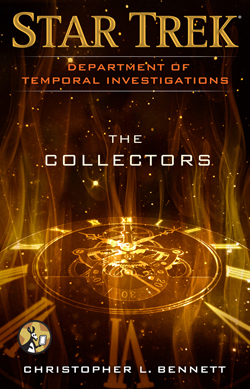 Back in 1996, as part of the celebration of the 30th anniversary of Star Trek, Deep Space Nine aired the fantastic episode “Trials and Tribble-ations,” in which Sisko and the DS9 contingent found themselves cast back in time and mixed up in the goings-on between Kirk and the Klingons on board space-station K-7 in the classic Original Series episode “The Trouble with Tribbles.”  (Through groundbreaking-for-the-time special effects, we got to see the DS9 crew digitally inserted into famous scenes from “The Trouble with Tribbles.”  It was, and remains, a hoot.)  In a few short framing scenes in that episode, we were also introduced to the Federation’s Department of Temporal Investigations, through the form of agents Lucsley and Dulmur.

First came Watching the Clock, which I feel is one of the best Star Trek books of the past decade. Mr. Bennett took the DTI, and Agents Lucsley and Dulmur, who appeared for less than four minutes in that one single DS9 episode, and expanded the concept and those characters into this wonderfully rich novel that digs deeply into Trek lore from across all the Trek series and many of the books and comics, etc., beyond.  The novel 1) explores the nature, purpose, and history of the DTI, 2) expands upon what we saw on-screen of Lucsley and Dulmur, developing them into three-dimensional characters, 3) references pretty much every single on-screen instance of time travel in Star Trek to create an extraordinary unified theory of Star Trek time travel, explaining how these many different, contradictory stories could actually work together in a coherent manner, 4) picks up the threads of the Temporal Cold War story that ran throughout Enteprise and pulls those many contradictory episodes together to present, for the first time, a clearly thought-out picture of what that Temporal Cold War actually was, who was fighting in it, and what their goals were (none of which Enterprise actually did), and 5) actually brings that Temporal Cold War story to a conclusion.  The novel is brilliant, a rich treasure trove of Star Trek lore.

Mr. Bennett followed that up with Forgotten History.  This sequel novel functions mainly as a prequel, depicting the events that led to the formation of the DTI in Captain Kirk’s era, and the early years in which the Department’s initial key players struggled to shape what the DTI would eventually become.  The novel also delves deeply into the many Original Series episodes that involved time travel and alternate or parallel universes, and, in an incredible example of Mr. Bennett’s creativity and attention to Trek detail, actually pulls those many different, very contradictory Original Series episodes into a unified story that makes sense and explains away many of the plot holes from those episodes.  (This is an extraordinary accomplishment.)  The book also gives us two fascinating new time-travel stories involving Kirk and the Enterprise crew.  All of this is great, but my favorite aspect of the novel is how Mr. Bennett was able to bring together references from a variety of different non-canonical Trek stories to craft an insightful, brilliantly thought-out picture of what happened between Star Trek: The Motion Picture and Star Trek II: The Wrath of Khan.  Although only a few years passed in between the release of those two movies, Star Trek II is set around fifteen years after TMP.  Picking up threads from Mr. Bennett’s own wonderful post-TMP novel Ex Machina, we get to see hints at what Kirk and the Enterprise were up to during this ill-defined period of Trek history.  (I particularly appreciated the references to Kirk’s relationship with Cianna, from the Lost Era series of Trek novels from several decades ago, and Scotty’s love Glynnis, from Peter David’s Star Trek Annual #3 published by DC Comics back in 1988, one of my all-time-favorite Trek stories.)

Although those were the only two DTI novels published, Mr. Bennett wrote three additional DTI novellas, that were each released as e-books.  I’d never read them.  After catching up with Mr. Bennett’s wonderful “Rise of the Federation” series of novels, I decided to get caught up with his DTI stories.  I had a blast going back and re-reading Watching the Clock and Forgotten History, and then I eagerly moved forward to the first DTI novella, The Collectors.

In this story, while transporting a mysterious obelisk with temporal properties that had been found on a doomed planet to the Department of Temporal Investigation’s vault on Eris, DTI agents Dulmur and Lucsly find themselves flung to the future — in specific, the 31st century from where future-agent Jena Noi (seen in Mr. Bennett’s two previous DTI novels) hails. But time has been altered, and Jena’s peaceful future has been changed to one in which the Federation’s Temporal Division now actively uses time travel to subvert and destroy their enemies across time. Out of their own time and out of their depth, can agents Dulmur and Lucsly assist Agent Noi in setting the timeline right?

I loved this novella, which was a wonderful continuation of characters and concepts that Mr. Bennett had introduced in his two previous DTI novels.  I am sorry that those two DTI novels did not, apparently, prove profitable enough to warrant any additional novels, but I am delighted that this novella (as well as two more that followed it) allowed this series to continue.  The Collectors is a fun story, one that rips along at a fast pace and doesn’t overstay its welcome.

I was disappointed that Garcia and Ranjea, intriguing new characters introduced in Watching the Clock, didn’t have much to do in the sequel book, Forgotten History, so I was happy the two of them were involved in this story, albeit still in a supporting role.

I loved the reference to the Certoss, an alien race involved in the Temporal Cold War (that storyline from Enterprise that Mr. Bennett wrapped up in his first DTI novel, Watching the Clock) that were major players in Dayton Ward’s novel From History’s Shadow.  (I actually just recently re-read that novel as well, and I’ll be writing more about it, and its two sequels, soon!)  And it was fun to see Jena Noi, an intriguing side-character from the 31st century who’d appeared in both previous DTI books, elevated to a major role in this story.

I loved the way this story directly addresses an important question about the 24th-century era DTI — why DON’T they do more to study and attempt to utilize the many temporal artifacts they have collected over the years?  As one character suggests at one point in this novella, couldn’t the knowledge they could gain from study of these artifacts benefit their modern-day society?  The story that unfolds serves to answer that question, as we can see the wisdom behind the DTI’s institutional caution and conservatism.

Speaking of fantastic, did Mr. Bennett allude to Dr. Doom’s time machine being stored in the DTI’s secret vault on Eris, stored in room D4? I believe he did!!

Since it sadly doesn’t look like there will be any future full-length DTI novels coming, Mr. Bennett felt free to allow his characters to move forward past the status quo, as we see Dulmur accepting a promotion that would break up his long partnership with agent Lucsly.  That was surprise.  I wonder how this will play out in the next two DTI novels.  Change is hard but it’s nice that Mr. Bennett’s story acknowledges the passage of time for these characters.

I loved this novella, and moved on immediately to read the next two!  I’ll be back soon with my thoughts on those!