Skip to the content
HomeWritten PostStar Trek Enterprise: Rise of the Federation: Live By The Code 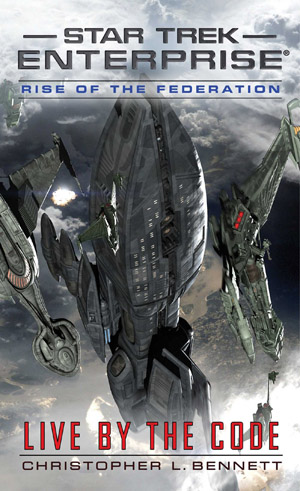 Star Trek Enterprise: Rise of the Federation: Live By The Code

Live By the Code is the fourth book in Christopher L. Bennett’s “Rise of the Federation” series of novels.  Set several years after the end of the fourth and final season of Enterprise, after the end of the Romulan war (chronicled in the Romulan War series of novels by Michael A. Martin and Andy Mangels), this series tells the story of the early years of the United Federation of Planets.  After reading the first three novels in this series (click here for my review of A Choice of Futures, Tower of Babel, and Uncertain Logic), I was eager to catch up with the fourth book.

In this novel, we see that Starfleet finds itself on the verge of a crisis as they continue to confront societies that utilize the Ware technology, as introduced in the previous novel.  (This is a follow-up to ideas introduced in the second-season Enterprise episode “Dead Stop,” in which the Enterprise encountered a fully automated space station that used the brains of sentient beings as its core computer-processors.)  At first our heroes are dead-set on wiping out what they see as technology that viciously preys upon unsuspecting aliens, but when they confront a vast society that appears to exist in equilibrium with the Ware, things immediately grow more complicated.  With the involvement of a faction of Klingons, the newly-formed United Federation of Planets risks finding itself in the midst of a war on multiple fronts.

Live By the Code is a terrific novel, another excellent installment in Mr. Bennett’s “Rise of the Federation” series.  I’m glad to see the Klingons enter this story, even in what amounts to be a relatively minor way.  (From what we know of Trek continuity from this era, the Federation and the Klingon Empire maintained a “cold war” setting for decades.)  I have also been enjoying Mr. Bennett’s extrapolation, in these novels, of the alien technology which he has called the Ware.  We never saw that technology again on Enterprise, after “Dead Stop,” but Mr. Bennett has made quite a meal out of exploring the nature of that technology and its effects on multiple different galactic civilizations.

The novel’s title is clever and appropriate, as the “code” refers to both the alien code of the Ware’s technology, the Klingon code of honor, and Admiral Archer’s efforts to develop for starfleet a code of behavior to govern their actions — the first step towards the noninterference directive that we’ll know in Kirk’s era as the Prime Directive.

I have enjoyed the very clever ways in which Mr. Bennett’s “Rise of the Federation” novels have been exploring how all the aspects of the peaceful, beneficent Federation that we know from Star Trek might have originally come to be.  What snuck up on me as I read this novel was that, in fact, this entire story-line was designed to show us how the Prime Directive, such a core Star Trek concept, might have originated!  This has been a theme running through Mr. Bennett’s series, showing us how these early Federation captains have been wrestling with issues of interference versus noninterference as they explore the galaxy and encounter new alien races.  We have already seen how Captain Shumar and the Essex’s actions on Sauria led inadvertently to the rise of the dictator Maltuvis (referenced in the Original Series episode “What Are Little Girls Made Of?”).  But it turns out this entire Ware story-line has also been taking the narrative in that direction, on a much more epic scale.  I am enjoying the careful way in which Mr. Bennett is exploring how this bedrock principle of the Federation might have come to be.

It’s interesting and a little unsettling to read a Star Trek book in which our heroes basically lose.  There is a surprisingly large body count at the end of this novel!  Its a bold and surprising step, and I am eager to see where this story will go in the next book.

What Mr. Bennett did to the mostly Andorian crew of the Vol’Rala was very surprising.  I did not expect that turn of events.  Mr. Bennett succeeded in what he wrote in the book’s online annotations that he intended to do.  I will say no more for fear of spoilers!

I loved the way Mr. Bennett explored, in this book, the schism in Klingon society between those affected by the Augment virus, the QuchHa, and those who still looked like traditional Klingons, the HemQuch.  This is a wonderful expansion upon the Enterprise two-parter “Affliction” and “Divergence,” which provided an in-continuity explanation for why the Klingons in the Original Series looked almost human, very different from the Klingons as seen in the later Trek movies and twenty-fourth century-set TV shows.  Other novels and fan sources have explored this, originating the terms QuchHa and HemQuch.  I love how Mr. Bennett’s story incorporated and further explored those ideas!  It was interesting to see more of several Klingon characters from that Enterprise two-parter, including Dr. Antak and General K’Vagh.  And I loved the reference to Kor from the Original Series episode “Errand of Mercy” (as well as several DS9 episodes)!

While Captain T’Pol and the Endeavor and Captain Malcolm Reed and the Pioneer represent the main focuses of Mr. Bennett’s novel, I was happy to see that Captain Shumar and the Essex have continued to be involved!  We know that Captain Shumar, as well as Steven Mullen and Morgan Kelly, will meet an untimely fate in 2167, as per the TNG episode “Power Play”.  As we see these characters developed in Mr. Bennett’s books, and as that 2167 date ticks ever closer, it’s sad knowing the fate that lies before them.  This is great story-telling.

I enjoyed the time this novel spent with Phlox’s family, and Mr. Bennett’s exploration of Denobulan society.  I particularly enjoyed Mr. Bennett’s attempt to do the math to explain how Phlox’s enormous family was structured, based on some confusing and possibly conflicting lines of dialogue from various episodes of Enterprise.  I thought it was clever the way Mr. Bennett paralleled the stories of the Klingon Antak’s son with the Denobulan Phlox’s son.  This was a nice follow up to events from the Enterprise episode “The Breach” and some welcome character development for the usually jovial Dr. Phlox.  I will confess that I felt the depiction of Phlox’s reconciliation with his son was too abrupt.  In my opinion, that story needed more time to breathe in the book than it was afforded.

I was happy to see Trip Tucker still back in the Starfleet fold, somewhat, working under an assumed identity as chief engineer on the Pioneer.  I continue to hope that Mr. Bennett can extricate Trip from this dreary Section 31 story in which he has been embroiled for so many books now.  This book’s developments give me hope… though I was less than thrilled by the ending, in which Trip vows to take down 31 from the inside.  We only finally wrapped up so many years of Dr. Bashir’s vowing the same thing in stories set 200 years later in David Mack’s novel Section 31: Control.  I am a little sick of this story-cycle, and since we know that 31 will continue to exist in the 24th century, we know Tucker can’t possibly succeed.  (I wonder if future “Rise of the Federation” novels will address the “Ureau” story-line that David Mack created, regarding the origins of Section 31?)

Speaking of Trip, though, I thought it was very nice to see Trip and T’Pol finally reunited.  I am interested to see where their story goes.  I also thought it was nice that Mr Bennett finally got Val Williams and Samuel Kirk (grandparents to James T. Kirk) together after several novels of teasing!

I was tickled by the way Mr. Bennett incorporated Flint, from the Original Series episode “Requiem for Methuselah,” into the story!  Don’t think I didn’t notice the clever foreshadowing of Flint’s involvement with cybernetics, that will play into the story of Data’s resurrection as depicted in David Mack’s Cold Equations trilogy of novels.

I also enjoyed the out-of-nowhere reference to the destruction of Theta Cygni XII, a plot point from the Original Series episode Operation: Annihilate!  Once again I am impressed at Mr. Bennett’s attention to the minute details of Trek continuity, and his thoughtfulness regarding what significant Trek events would have happened during the years in which these “Rise of the Federation” novels are set.

Live By the Code is another winner, and I am eager to move on to Mr. Bennett’s fifth “Rise of the Federation” novel, Patterns of Interference, that was published last year.