Skip to the content
HomeWritten PostStar Trek Enterprise: Rise of the Federation: Patterns of Interference 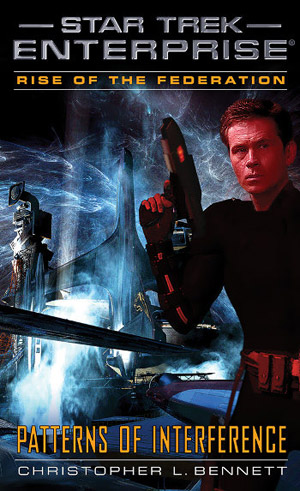 Star Trek Enterprise: Rise of the Federation: Patterns of Interference

I am pleased to have at last caught up with the fifth and most-recently published book in Christopher L. Bennett’s “Rise of the Federation” series of novels.  Set a decade after the end of Star Trek: Enterprise, this series charts the lives of the Enterprise crew following the Romulan War, and tells the story of the establishment and early development of the United Federation of Planets.

The main thrust of this fifth book, Patterns of Interference, concerns Admiral Jonathan Archer’s attempt to convince his fellow leaders of the young United Federation of Planets that Starfleet should adopt a non-interference directive (what will eventually be known in Kirk’s era and beyond as the Prime Directive).  Archer feels that the tragic consequence of the crisis with the Ware (as depicted in the previous two “Rise of the Federation” novels) proves the damage that can be caused when Starfleet officers interfere in alien societies, even with the best of intentions.  And yet, many within Starfleet — particularly Archer’s former enemy turned colleague, the Andorian Shran — fear that this proposed noninterference directive would lead to a damaging isolationism.  Meanwhile, other enemies within and without plot the destruction of this new Federation of Planets, while Trip sets out to find a way to defeat and expose Section 31.

Patterns of Interference is another great book from Mr. Bennett.  I was not a huge fan of Enterprise (though seasons 3 and 4 were very solid), but I am thoroughly enjoying this series of novels.  I love the careful, well-considered manner in which Mr. Bennett has constructed these stories, working backwards from the peaceful, noble Federation we know from Kirk’s era to ask, how did this society come about?  Mr. Bennett is posing — and answering — questions I’d have never thought to have asked.  These novels represent a thoroughly entertaining exercise in world-building.  I generally hate prequels — although these “Rise of the Federation” novels are a sequel to the Enterprise show, they are also a prequel to the Original Series — but this is the best type of prequel, one that provides fascinating (see what I did there?) insight into the world and characters that we know and love, showing us all sorts of surprising things about how this world came to be.  (These novels are terrific prequels in every way that Star Trek: Discovery wasn’t.)

Once again Mr. Bennett has given his novel a clever title.  Patterns of Interference has a nice Original Series ring to it (somewhat reminiscent of the episode “Patterns of Force”), and it alludes to both the Federation’s internal debate over noninterference as well as Trip’s attempt to interfere with the operation of Section 31.

I love the ending of the novel.  I’d expected that by the end of this book, Archer would have won out and his noninterference would be a done deal.  Mr. Bennett went in a different direction, and I was very pleasantly surprised by that.  We know that eventually the Federation will enshrine this Prime Directive as its General Order One, but surely such a monumental policy wouldn’t have been accepted by all overnight, perhaps taking years if not decades to become the centerpiece of Starfleet policy.  I like that Mr. Bennett didn’t wrap this all up in a nice simple bow at the end of the book.

By the way, I loved that one of Shran’s arguments against the noninterference directive was his fear that it could be misinterpreted as a reason not to help others in distress.  That has, in fact, often been how the Prime Directive has been depicted on Star Trek TV shows.  Using the Prime Directive as an excuse to let innocents perish always seemed to me to be a disturbing twisting of this idea.  I am delighted that Mr. Bennett agreed!!  (I wrote about this a few months ago in my review of the premiere episode of Star Trek: Discovery, in which I complimented the show on their handling of the Prime Directive in the vignette with Burnham and Captain Georgiou on that desert planet in the opening minutes.)

The Archer-Shran relationship was always of interest to me on Enterprise, and I like the way Mr. Bennett has charted their relationship over these books.  I love the idea that the two have struck a deep friendship, after so many years as adversaries, and I also like the monkey-wrench that their disagreement over the noninterference directive threw into their relationship in this book.  (I loved way this story was resolved at the end of the book — the final scene between the two characters was perfect.)  I like that Mr. Bennett pays attention to the characters’ personal lives, showing us Archer’s relationship with Dani Erickson (introduced in the Enterprise episode “Daedalus”), Hoshi’s struggles over the marriage proposal from the injured Takashi, and also Malcolm Reed’s relationship with Caroline Paris.  It’s nice to see the taciturn Reed enter into a romantic relationship, and I am enjoying the way Mr. Bennett has fleshed out the new-for-the-novels character of Caroline in these books.  (I laughed that she shared her descendant Tom’s love for Captain Proton!)

I noted in my review of Live By the Code that I was nervous about the story-line of Trip’s trying to expose and destroy Section 31, a task we knew to be impossible.  I was reasonably satisfied with how things worked out here.  On the one hand, it felt a little too easy for Trip to win as handily as he did.  On the other hand, I liked Mr. Bennett’s suggestion that, rather than Section 31 having been active continually for hundreds of years, it was more likely that the group came and went.  (Otherwise they would have surely been discovered before Bashir took them on two centuries later.)  This works for me.  Mr. Bennett’s novel also nicely dances around the picture of 31’s origins as given in David Mack’s novel Section 31: Control.  I didn’t love that novel’s depiction of Uraei, and so I was pleased that wasn’t directly referenced here.  This book doesn’t contradict anything in Control without directly dealing with any of that either, and that seemed to me like the perfect way to go.  I did enjoy learning the fate of Admiral Parvati Rao, a character involved in the origins of Section 31 as seen in Control.

* I enjoyed the commentary given to Caroline Paris, in which she suggests that sexism could reemerge in the Federation’s future (on colony worlds so focused on the importance of procreation that they could begin to expect women to devote themselves to that above all other pursuits).  This is a nice way of explaining the sexism that sometimes popped up in the Original Series.  (The show was enormously progressive for the late sixties, but still reflects some of the prevailing attitudes of the time that seem regressive today.)  I appreciated this small digression in the book!

* R.I.P. Porthos.  We couldn’t expect him to live forever and I am glad Mr. Bennett addressed this.

* I’ve been lamenting in many of these reviews that I have not enjoyed having Trip be separated from his friends for the past decade of story-time in these books.  I understand that the narrative problem of undoing his stupid death as seen in the lousy Enterprise finale, but I have long since grown weary of this.  I enjoyed having Trip somewhat back in the fold serving as a Starfleet chief engineer for the past two books, albeit under an assumed identity.  I thought with the Section 31 storyline finally resolved that we’d be able to see Trip get some sort of happy ending and reunion with his friends, but unfortunately that’s not where things went at the end of this book.  While I have quite enjoyed Mr. Bennett’s development of the relationship between Trip and the Orion spy Devna (a character originating from Star Trek: The Animated Series), I didn’t enjoy seeing Trip once again separated from T’Pol and the rest of Starfleet at the end of this book.

* The threat of the Saurian dictator Maltuvis has been building since Mr. Bennett’s first “Rise of the Federation” book.  With him now aligned with V’Las (the villain from the “Vulcan Reformation” trilogy of episodes from Enterprise’s fourth season), I’d love to see this story-line come to the forefront in the next book.  (Assuming there will be a next book, as Pocket Books’ license for Star Trek novels seems to be on pause.  Luckily I still have about a dozen Trek books from the past few years to catch up with, but I am hoping this gets worked out tout suite.)

I’ve enjoyed the ride of these five “Rise of the Federation” novels so far.  I can’t wait to see where Mr. Bennett takes this series, and these characters, from here.