Skip to the content
HomeWritten PostStar Trek: From History’s Shadow 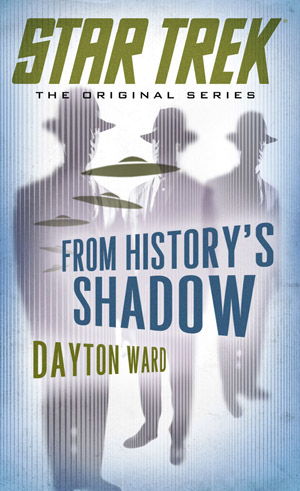 Dayton Ward’s wonderful Star Trek novel From History’s Shadow is a standout in Pocket Books’ wonderful continuing series of Star Trek novels.  This book does exactly what I most enjoy seeing in these Trek novels: it weaves together multiple characters and story-lines from across the Star Trek franchise into a ferociously entertaining tale that expands our understanding of the Star Trek universe as a whole and finds previously undiscovered avenues for fantastic new stories.

The bulk of the novel takes place on Earth between 1947 and 1968.  In the great Star Trek: Deep Space Nine episode “Little Green Men,” we saw that the spaceship that crashed in Roswell, New Mexico in 1947 was actually crewed by a time-traveling Quark, Rom, Nog, and Odo.  That episode was a fun romp.  But From History’s Shadow asks the questions that episode left unexplored — what effects would this encounter between several 1947 humans with these aliens from the future have on those people, and on human society as a whole?  One of the main characters in From History’s Shadow is the military man Captain James Wainwright.  Wainwright was a minor character in “Little Green Men,” but Mr. Ward has beautifully explored his character in this book.  We see how Mr. Wainwright came to be involved in Majestic 12, a secret organization working to track down evidence of alien visitors on Earth and to develop methods of defending against them.  (While there is no proof that Majestic 12 ever existed, this isn’t a made-up Star Trek organization — it’s an organization that many UFO conspiracy theorists believe actually did exist in the fifties.  I love how Mr. Ward was able to incorporate tons of real-life details like that into his fictional story.)

For another of the book’s major characters, Mr. Ward turned to the Enterprise episode “Carbon Creek,” in which T’Pol tells Archer and Trip a story about Vulcan visitors to Earth in 1957, and how one of them, Mestral, chooses to stay on Earth when the others are rescued.  That episode plays coy as to whether those events actually happened as T’Pol describes them, but Mr. Ward assumes they did, and picks up the story of Mestral’s adventures on Earth.  The idea that Mestral and Wainwright might one day cross paths is a brilliant one, and it provides one of the key elements of this novel.

The novel follows Wainwright and Mestral’s stories, as well as a number of other characters created for the book, and also a few other surprises from across the vast Star Trek tapestry, weaving in and out of both known events from Star Trek history as well as actual events from real-life human history.  We follow these characters all the way through to the 1968-set events of the Original Series episode “Assignment: Earth” in which Kirk, Spock & co. meet the enigmatic Gary Seven and become involved in the events as McKinley Air Force Base in Florida.  The book is brilliant in the way it pays such close attention to the minutia of Star Trek continuity, while also connecting in clever ways to the real-life events of those decades.  (The only previous Trek books that have taken this approach are Greg Cox’s wonderful The Eugenics Wars series, as Mr. Ward himself notes, giving credit where credit is due in this book’s acknowledgements.  Mr. Cox’s books presented an intriguing solution to the continuity problem created when our real-life history caught up to the years given for key events in the Star Trek universe’s back-story, specifically World War III and the Eugenics Wars that saw the rise of Khan Noonien Soong.  Mr. Cox crafted a story in which the genetically-engineered superhumans were living among us and waging their global war against one another in secret.  Mr. Cox’s novels wove their fictionalized events in and out of actual historical events.  It was a very clever approach, and one that Mr. Ward has quite successfully utilized here too.)

At the same time as the book charts the secret history of extra-terrestrials on Earth in the fifties and sixties, the novel also tells us a connected story set in the time of Kirk’s five-year mission, which intersects with the twentieth-century events in surprising ways.  While I was most interested in the chapters set on twentieth-century Earth (which are this novel’s main reason for being), Mr. Ward has a great handle on Kirk, Spock, and the classic Enterprise crew, and I loved the way they were incorporated into the story.

Can you tell yet that I loved this book?

In addition to Mr. Ward’s clever attention to continuity from the various Star Trek TV shows, I was also pleased that his novel worked so nicely with the events of Christopher Bennett’s Forgotten History (a novel which, by coincidence, I had just recently re-read), as well as Greg Cox’s afore-mentioned Eugenics Wars novels.  I love the careful way that these various books fit together into a much-larger tapestry.  I have particularly enjoyed the way Mr. Cox’s novels and now this book have continued to use and develop Roberta Lincoln.  She only appeared in that one single Trek episode (“Assignment: Earth”), but as played by Teri Garr she was such a memorable character!  I love seeing more of this great, smart and tough female character in these novels.

I was never a big fan of the Enterprise episode “Carbon Creek,” and I thought the Vulcan Mestral was sort of stiff.  But Mr. Ward did a terrific job of fleshing Mestral out into a character who I cared about.  Same goes for Wainwright, by the way.  He’s from an episode that love, but Wainwright was a pretty one-dimensional character in “Little Green Men”.  Not so in this novel.

From History’s Shadow was released back in 2013.  I’m not sure why I never reviewed it before on this site!  In the years since, Mr. Ward has written two sort-of sequels to this book: Elusive Salvation and Hearts and Minds.  Before reading those books a few months ago, I decided to re-read From History’s Shadow.  I’m glad I did!  It reminded me what a terrific novel this is.  It’s one of my very favorite Star Trek books.  I’ll be back soon with my thoughts on Elusive Salvation and Hearts and Minds…!