Skip to the content
HomeWritten PostStar Trek: Further Adventures of the Department of Temporal Investigations! 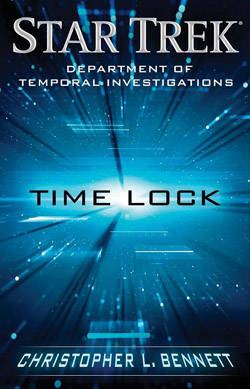 Star Trek: Further Adventures of the Department of Temporal Investigations!

The Department of Temporal Investigations was mentioned in one single Star Trek episode, Deep Space Nine’s “Trials and Tribble-ations.”  But many fans (myself included!) loved what we saw of the DTI, and its agents Dulmur and Lucsley.  Author Christopher L. Bennett must have felt the same way, as he expanded upon those characters and concepts in his two wonderful DTI novels, Watching the Clock and Forgotten History.  I had hoped for many more DTI novels, but I guess that was not to be.  Still, I was happy that Mr. Bennett continued the series in three novellas, which were released as e-books.  I quite enjoyed the first one, The Collectors, and I eagerly continued to read the next two, Time Lock and Shield of the Gods.

Novella #2, Time Lock, is a fantastic mind-bender in which a Time-Lock security device is activated to slow down times within the DTI’s vault on Eris, when a group of bandits assault the location in an attempt to steal some of the valuable time-travel devices the DTI has found over the years (as discussed in the previous DTI e-book novella, The Collectors).  And so the 90-minute attempted heist within the vault takes place over the duration of nine months in the outside world.  As the story progresses, DTI agents within and without the time locked vault attempt to work together to save the day, with the ever-increasing time-difference alternatively proving an advantage and a disadvantage.

Mr. Bennett’s wonderfully clever, and mathematically precise, story is a delight, and at a short e-book length this novella races along at a gripping pace.

This is a very cool concept for a story, and Mr. Bennett keeps this complicated story clear and easy to understand.

I loved seeing Dulmer get to have a successful romantic relationship.  And I particularly loved that he gets involved with a Denobulan, Dr. Phlox’s race (from Star Trek: Enterprise) which Mr. Bennett had recently explored in his novel Rise of the Federation: Live By the Code.

When reading The Collectors, I had wished that agents Garcia and Ranjea (introduced in Mr. Bennett’s first DTI novel, Watching the Clock) had more to do, a wish that was thankfully granted in this novella.

I enjoyed the reference to the prism stone from Voyager: Eternal Tide, now stored in the DTI vault.

The novella ends on a terrific cliffhanger, which was a big surprise!  Thankfully I had already downloaded Shield of the Gods and could proceed to the conclusion without delay… 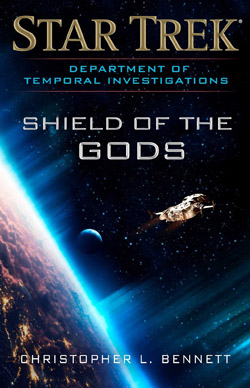 Shield of the Gods:

This final novella was a wonderful conclusion to Mr. Bennett’s e-book DTI trilogy.  The kidnapped DTI agent Ranjea attempts to determine the mastermind’s plan, while his partner Agent Garcia and the other DTI team-members work to track him down.

I enjoyed the exploration of the mastermind character, Daiyar’s, background, and Mr. Bennett sets up a wonderful philosophical quandary for our heroes as we can perhaps see some reason in Daiyar’s attempts to wipe out a hideous, dangerous race.  I enjoyed the way Mr. Bennett sketched out the tragic relationship between the Fethetrit and the Rikeen, two very different alien species from different planets in a binary star-system.

I also loved the way this story allowed us to learn a little more about the mysterious Aegis (introduced in the Original Series episode “Assignment: Earth” and named by Howard Weinstein in issue #50 of DC Comics’ Star Trek series from the eighties/nineties.)  It was great to further explore this organization and to meet another one of their agents, the Cardassian Rodal.  And we even got to visit to one of their never-before-seen bases!  That was fun.

I was surprised by the story’s sad ending, but in the end I enjoyed it.  It certainly was an emotional conclusion to this series.  I wonder if Mr. Bennett would have gone this way with his story had there been a prospect of more DTI novels.

I am very sad that Shield of the Gods seems to be the end of these DTI stories, at least for now.  I do hope that Mr. Bennett is able to return to these characters at some point in the future.  But for now, I am happy and satisfied!