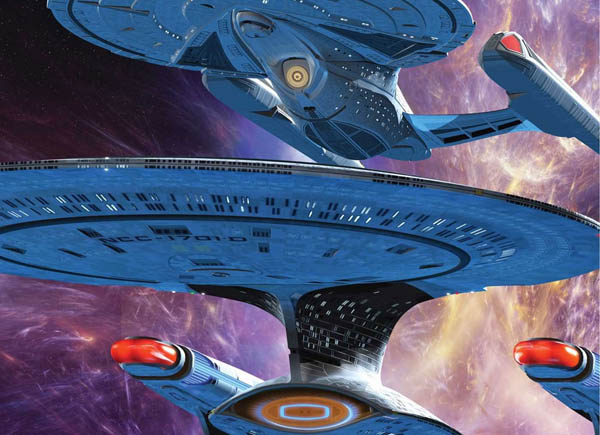 Seven years after the events of Star Trek: Nemesis, and after the dramatic events of the five-book Trek crossover series “The Fall,” the USS Enterprise–E under the command of Jean-Luc Picard has set out on a new mission of exploration, investigating the area of uncharted space known as “the Odyssean Pass.”  While observing a nebula, they are astonished to discover the appearance, seemingly from out of nowhere, of an entire planet.  From the planet they receive a distress call from a group of aliens trapped on the surface, warning all ships to stay away lest they be trapped on the planet, too.  Meanwhile, years earlier, Captain William T. Riker and the Enterprise–D witness the incredible disappearance of a planet they had been studying inside of a nebula.  Of course, William Riker was never the captain of the Enterprise-D.  But this William Riker is, having assumed command after the death of Picard at the hands of the Borg several months earlier.  Meanwhile yet again, 100 years earlier, Romulan commander Sarith and her warbird Bloodied Talon are also drawn into the mystery.

I love the complex web of continuity being woven between these post-Nemesis Pocket Books Star Trek novels, and epic crossover series like “The Fall” are always a ton of fun.  But I also enjoy reading done-in-one Trek novels whose main focus is on presenting a compelling new sci-fi mystery (hopefully wrapped around interesting character story-lines).  Dayton Ward’s previous TNG novel, Armageddon’s Arrow, was a wonderful yarn in that style, one that presented interesting new alien races and new mysteries.  This follow-up novel, Headlong Flight, is cast from a similar mold, bringing us another original story of “strange new worlds.”

I thoroughly enjoyed the mystery of the dimension-hopping planet, and the way Mr. Ward’s story developed across three different fronts — on board “our” Enterprise-E, on board the alternate-universe William Riker’s Enterprise-D, and also on board the Romulan warbird from Kirk’s era.  As the story developed, this three-pronged story took on an exciting momentum as we watched characters working together (and sometimes at cross-purposes) across multiple fronts.  This was a lot of fun.

At first, when it became clear that the Enterprise-D section of the novel was taking place in a never-before-seen alternate universe, I wasn’t that enthused with the idea.  Why were we wasting our time with this group of alternate versions of our main characters who we’d never seen before and would likely never see again, rather than continuing to develop and explore the actual main characters of the main-timeline Enterprise-E?  And yet, as I read Headlong Flight, I found that the Enterprise-D sections were my favorite parts of the novel!  I loved the way Mr. Ward fleshed out this alternate Enterprise crew, characters who were in some ways just like our familiar TNG characters, and in other ways very different.

At first, I found myself enjoying the enigma of figuring out when/how this timeline had changed from the main timeline.  Yes, this Captain Picard did not survive “The Best of Both Worlds”, but there were differences beyond that — most notably that, in this universe, Tasha Yar was still alive.  As the novel progressed, I found myself less interested in the specifics of the timeline, and more interested in these characters Mr. Ward had created.  This is evidence that this aspect of the novel worked well.  I enjoyed reading about Captain Riker’s struggles to live up to the long shadow cast by the dead Picard.  I loved the detail that Edward Jellico (from the TNG episode “Chains of Command) was Riker’s Starfleet supervisor in that universe, and a source of much annoyance to Captain Riker.  It was also a fun discovery to see that this Riker and this Deanna Troi had rekindled their romance, long before the prime timeline Riker-Troi did.  I enjoyed seeing the pre-emotion chip Data again, and exploring how Data was fitting in to his new role of Enterprise first officer.  It was also great to get to see, again, the close friendship between Data and Geordi.  I miss that from the early TNG days.  This focus on Riker and the alternate Enterprise-D crew was the best aspect of the book, and I’d love to somehow see more of this alternate universe crew in a future novel!

The only downside is that the focus on this new Enterprise-D crew means that the Enterprise-E crew-members get a little less attention than they received in Armageddon’s Arrow.  Nevertheless, Mr. Ward does take the time to give some enjoyable moments to the Enterprise-E crew.  We see First Contact Specialist T’Ryssa Chen’s continuing to struggle somewhat with the reality that her specialized skills aren’t called for nearly as frequently as she’d like; we also see more of her friendship with science officer Dina Elfiki, as well as her budding romance with security chief Rennan Konya.  The Denobulan Doctor Tropp, the Vulcan engineer Taurik, the Cardassian Glinn Dygan, Security Chief Smrhova, and many of the other new characters who make up the crew of the post-Nemesis Enterprise-E are also involved in the story.  It’s fun to see how these characters have been developed across multiple novels.  (Only Taurik had ever actually appeared on-screen, in the TNG episode “Lower Decks”.)

The Romulan section of this novel, in which we see Commander Sarith and her crew attempt to obtain the secret of the dimension-jumping planet in order to restore their good favor in the eyes of the Praetor, is also strong.  This look into the crew of a Kirk-era Romulan warbird, and in particular Commander Sarith’s relationship with her loyal first officer, is of course reminiscent of the Original Series episode “Balance of Terror.”  Less positively, it’s also somewhat similar to both the Romulan story-line from the recent novel Legacies book 2: Best Defense (which also spent a good deal of time exploring the crew of a Kirk-era Romulan warbird), and also to the Klingon story-line from Legacies book 3: Purgatory’s Key (in which a Klingon crew attempts to use a scientific discovery to restore their crew’s honor).  So that sense of familiarity was a bit of a bummer, but if you ignore those other recent Trek stories, the tale that Mr. Ward has crafted here in Headlong Flight is solid.

In the early going, there were other aspects of this novel’s story that also felt familiar to me.  The set-up of multiple Enterprises in multiple timelines exploring the same mystery reminded me strongly of the TNG finale “All Good Things…”  And of course Star Trek has done countless prior alternate universe stories.  (We even previously got a brief glimpse of an alternate universe Riker commanding an Enterprise-D following the death of Picard at the hands of the Borg in the TNG episode “Parallels”.)  But Mr. Ward’s skillful exploration of this particular new sci-fi mystery, and his strong focus on developing the characters of this alternate universe Enterprise-D crew, allows Headlong Flight to be a complete, successful new story all its own.

I am quite enjoying these new exploration-focused TNG novels.  I hope the subsequent books continue to be as strong as Dayton Ward’s Armageddon’s Arrow and Headlong Flight!