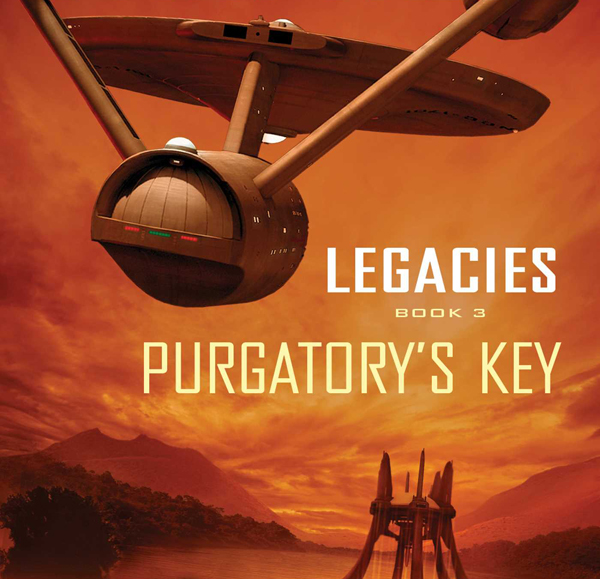 Eighteen years previously, when Captain Robert April commanded the USS Enterprise, he and the young Lieutenant Una (who would eventually become Captain Christopher Pike’s first officer on the Enterprise, as seen in the original Star Trek pilot “The Cage”) came into possession of a powerful piece of alien technology: a “transfer key” that held the secret of travel to another universe.  To prevent the key from falling into the wrong hands, April and Una hid the key on board the Enterprise, and passed the secret on to the Enterprise’s subsequent captains.  But now, Una has stolen the key and used it to travel to that other universe in an attempt to rescue her crew-mates who were banished there eighteen years before.  At the time she believed them lost forever, but now Una believes she can find and recover them.  Captain Kirk agreed to return to the point of transition between the two universes, the planet Usilde, after a set period of time to again use the transfer key to hopefully allow Una and her crew-mates to return home to their universe.  But Usilde is now a planet in disputed territory between the Federation and the Klingons.  Kirk decides to risk upset to the delicate Klingon-Federation negotiations and take the Enterprise into disputed space.  But with the Enterprise badly damaged following their battle with the Romulans in Best Defense, and multiple Klingon adversaries with competing agendas lying in wait for them, the mission seems hopeless.

Purgatory’s Key is a strong conclusion to the Legacies trilogy, and I think it’s the strongest of the three books.  The novel is jam-packed with plot and incident, keeping the story a very fast-paced, brisk read.  I think this book finds the best balance of the books in this trilogy between telling a plot-heavy story while also taking the time to explore all of the many characters involved in the tale.

This trilogy has explored a rich time-period in Trek history, following the creation of the Organian Peace Treaty in the Original Series episode “Errand of Mercy.”  In that episode, we saw the Federation and the Klingon Empire on the verse of war, but the deus ex machina of the powerful alien Organians put a stop to hostilities.  The resolution of that episode presented all sorts of questions for Trek fans.  How did the Organians ensure enforcement of the cease-fire?  How powerful were those aliens?  Could they truly monitor and control Federation-Klingon interactions across the galaxy?  These questions were never answered by future Trek canonical stories, which mostly ignored the Organian Peace Treaty.  (As far as I can recall, it was never again mentioned in any of the Trek movies or subsequent TV shows, many of which contained incidents of Federation-Klingon conflicts.)  I’d love someday for a novel to explore exactly what transpired to eventually end the constraints of the Organian Peace Treaty, and in the earlier books I’d thought maybe Legacies would be it.  That turned out not to be the case, but still, I enjoyed this exploration of this moment in the history of Federation-Klingon relations.

And I enjoyed that Purgatory’s Key presents us with numerous new, Klingon characters, each of whom have competing agendas and plans.  For example, the disgraced Klingon captain Visla sees an opportunity to defeat the hated Captain Kirk and restore herself and her crew to honor, while another Klingon captain, J’Teglyr, feels that his honor demands that he follow the will of the Klingon High Command and not incite the Organians to action by initiating hostilities with a Federation starship.  We also spend some time with a Klingon scientist, B’tinzal, who is tasked with exploring the alien technology left on Usilde.  (I wish we’d gotten to spend more time with B’tinzal, a very different type of Klingon warrior than the usual military type.)

While I wouldn’t say that Purgatory’s Key provides any sort of deep exploration of any of the main Star Trek characters, I did appreciate that Mr. Ward and Mr. Dilmore found ways to involve all of the key Original Series characters in the story.  Beyond Kirk/Spock/McCoy, it was nice to see that Chekov and Uhura and Sulu all had important pieces to play in the story.

While Una (“Number One”) was a major character in the first Legacies book, Captain to Captain, she didn’t have much to do in Best Defense.  I was pleased, though, that Purgatory’s Key returns Una to focus as we follow her attempts to find her lost crew-mates and also to uncover the true nature of the alternate universe in which she and they find themselves.  We also continue to spend time with Ambassador Sarek and Dr. McCoy’s estranged daughter Joanna, both of whom entered the story in Best Defense and found themselves, like Una, shunted off to this strange universe at that novel’s conclusion.  This book also spends some time with several Jatohr characters, such as the scientist Anadac, thus allowing us to get a somewhat better understanding of this alien race whose crossover to our universe on the planet Usilde had started all the trouble in the first place.

The earlier novels made a point of emphasizing the bizarre fungus that the Jatohr had introduced, and that was spreading across the planet from their citadel.  I’d thought there would be some secret to the true nature or purpose of that fungus, but that plot-point didn’t seem to wind up going anywhere.  (I guess the fungus was nothing more than evidence of the Jatohr’s attempts to transform Usilde into a planet more suitable to their alien nature.)  Also, the previous books had hinted at some unexplained secrets of the Usilde citadel, and that the machines in the citadel were continuing to work towards some secret purpose even after the Jatohr were sent back to their universe eighteen years earlier by Una and Captain April.  Purgatory’s Key does resolve that, albeit in a somewhat anticlimactic/unsurprising fashion, as we learn that the citadel was capable of launching into orbit in order to better complete the terraforming of the planet.  (Are we to understand that it really took eighteen years for the citadel to transform itself to be capable of that?  Or was it something that the Enterprise crew did, with their use of the Transfer Key, that activated the citadel’s transformation?  I don’t think the novel really clarifies that.)  I also thought that the earlier novels had set up a huge problem for Kirk, with Usilde now in disputed territory, that would lead to the near-impossible challenge of his having to get past both fellow Starfleet and Klingon forces in order to reach the planet.  And yet, in this book, it seems that Kirk doesn’t have much difficulty in reaching Usilde at all, with his main obstacle being only Visla and her one out-of-date ship.  So that also felt a bit anticlimactic to me.

In my review of Best Defense, I criticized the inclusion of Gorkon in a story that felt far too similar to what happened to him in Star Trek VI.  I remarked that Trek VI seemed to strongly imply that Kirk and Gorkon had never before met, which seemed totally inconsistent with the story that I was reading.  The end of Purgatory’s Key makes a weak attempt to resolve that continuity by suggesting that, though Gorkon had been involved with the events of this story, he and Kirk never actually met.  That didn’t satisfy me, as the idea that Gorkon was involved in almost exactly the same situation (in which his assassination — or what turns out in this story to be only his attempted assassination — would take the Klingons and the Federation to the brink of war) TWICE just felt silly to me.

I enjoyed the twist that the alternate universe, from which the Jatohr came and in which Una’s crewmates had been trapped, was not what anyone had at first suspected.  That was a nice bit of sci-fi fun.  I do wish the novel had explored the nature of that universe, and the Jatohr, more deeply.  (If the Jatohr consciousnesses were or could be separated from their physical forms in their home universe, then why did they manifest as slug-like creatures in our universe, and why didn’t we see any of them be more surprised to have physical form after they made the journey to our universe?  If the existence of technology — Spock’s probe — in their universe caused a disruption that gave them great pain, then how was any Jatohr able to create and master the technology necessary to create the citadel and the Transfer Key?  I am left with many of these sorts of questions.)

So I have some quibbles with the story.  However, the engaging writing and fast-paced plotting of Purgatory’s Key kept me engrossed in the book.  It wasn’t until I’d finished the book and was thinking about it that I started to ask all of these questions.  This was an enjoyable book to read, it just didn’t all hang together quite as well as I might have wanted.

While Purgatory’s Key was a strong conclusion to the Legacies trilogy, in the end, this trilogy was not what I had hoped.  The events of this story felt overly stretched in order to fill out a trilogy of novels.  I think a more condensed version of this story told in just one book would have been a lot stronger.  More importantly, the events of these novels didn’t feel to me that they had the significance to warrant a fiftieth anniversary trilogy of novels.  The idea of a secret passed from Enterprise captain to captain is a great hook, but beyond that this story didn’t feel all that important to Trek history, or to any of these characters.  This trilogy was shockingly light on character development.  We learned a little bit about Una (the mysterious “Number One” from the original Star Trek pilot, “The Cage”), but beyond that, this story didn’t really affect Kirk, Spock, McCoy, or any of the other main Star Trek characters in much of a significant way.  (McCoy and his daughter Joanna have something of a reunion, but not much beyond that.)  I wouldn’t criticize one stand-alone Trek novel for that — not every Trek novel needs to be universe-shaking — but for a trilogy of novels, and one intended to celebrate the fiftieth anniversary of Star Trek no less, this felt like a letdown to me.

I enjoyed Purgatory’s Key and this Legacies trilogy, but this certainly doesn’t rank among the best of the many great Trek novels that Pocket Books has published recently.

Pocket Books also published a second fiftieth anniversary trilogy of novels, titled Prey.  I’ve just started reading the first book in that trilogy, and it’s very clear that Prey is a very different type of story than Legacies.  For better or for worse?  I’ll be back here soon to let you know!