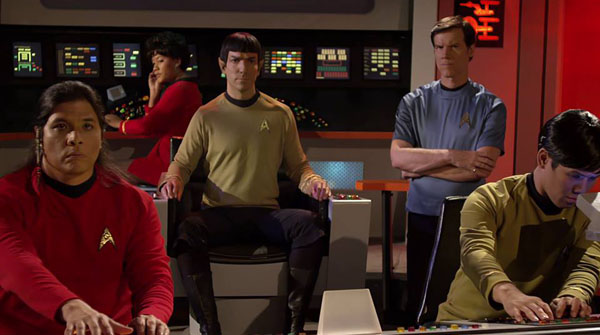 The fan-film series Star Trek: Phase II came roaring back with the release this week of their tenth full-length Star Trek episode: “Mind-Sifter.”  This episode has a fascinating history.  “Mind-Sifter “was originally written by Shirley Maiewski all the way back in 1974 for a fanzine called The Star Trek Showcase.  In 1976, Bantam included Ms. Maiewski’s story in their The New Voyages anthology of Star Trek fan-fiction, although their editors changed the story in ways that Ms. Maiewski did not approve.  Many decades later, the folks at Star Trek: Phase II decided to adapt Ms. Maiewski’s story.  In honor of that old New Voyages book, they released this episode under their series’ original title of Star Trek: New Voyages.

With me so far? In this episode, Spock is placed in command of the Enterprise when Captain Kirk goes missing for several months.  Somehow, Kirk has become lost in Earth’s past, trapped and abused in a mental hospital in 1958.  It’s all part of a Klingon plot to uncover the location of Gateway, the planet on which stands the Guardian of Forever, the powerful time-portal discovered by Kirk & co. in the seminal Original Series episode “The City on the Edge of Forever.”  With Kirk missing and presumed dead, the crew of the Enterprise attempt to move on with their lives, while Spock and McCoy’s relationship frays to the breaking point.

I remember reading that New Voyages book years and years ago.  “Mind-Sifter” was a memorable enough story that I still remember it, well over two decades since I read it.  I love the idea of this story being adapted by Phase II, and over-all they have turned in a very solid episode.

As always, the show looks phenomenal.  The sets and costumes are amazing, perfectly mimicking the look and feel of the Original Series.  In many ways, it looks even BETTER than the original!  The visual effects are extraordinary.  This episode, for the first time for Phase II, was released in two different versions. One has modern-style visual effects overseen by Tobias Richter and The Light Works.  The second has sixties-style visual effects created by Daren Dochterman, who oversaw the Director’s Edition of Star Trek: The Motion Picture.  Both versions are fun, but the modern-VFX version is far superior and definitely the one to watch.  These effects, though “modern” and far more advanced than what we saw in the sixties, still feel exactly right for an Original Series adventure.  The Enterprise and the other Starfleet ships and the Klingon vessel all look and move and feel exactly right.  Except they are looking better than they ever did before, far better than the original sixties goofy effects and also far better than the CGI effects created by CBS-Digital a few years ago for their Star Trek remastered project (in which they inserted newly-created CGI effects into the old episodes).  The visuals are absolutely amazing, just jaw-droppingly beautiful.

This episode has a grander scale than many previous efforts, taking place both all over the Enterprise but also on-board a Klingon ship, in a 1950’s mental institution, and, most impressively, on the surface of Gateway.  The way in which the production has recreated Gateway and the Guardian of Forever is amazing.  Absolutely perfect. 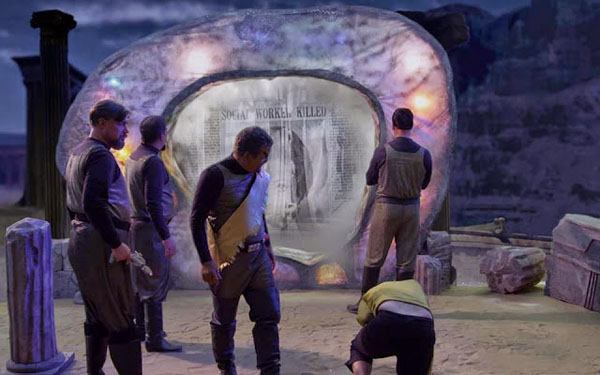 The Phase II cast has gone through a lot of changes in the past several episodes.  I very much hope they settle down and find more consistency with the cast in future episodes.  This group assembled for “Mind-Sifter” is pretty great, and I’d be happy for them to stick with this ensemble moving forward.  This is the new Captain Kirk Brian Gross’ debut episode, and he acquits himself nicely.  (Mr. Gross previously appeared in the vignette “Going Boldly” from last summer.  He also filmed two Phase II episodes before this one, “Bread and Savagery” and “The Holiest Thing,” but because of production problems neither of those episodes has yet been released.)  When Mr. Gross is in command as Kirk, he’s terrific, with all the strength and charm needed for the role.  I was surprised how weepy his Kirk got in some scenes, though.  That felt like the wrong choice to me.  I know that we’re supposed to understand that Kirk has been broken by the Klingon mind-sifter, but still, I think Mr. Gross mis-stepped in playing Kirk in tears in several scenes. I wish Phase II creator James Cawley had continued in the role, but over-all I am happy with Brain Gross as his replacement and interested to see his work in future episodes.

My favorite addition to the ensemble was Star Trek music expert Jeff Bond as McCoy.  I’d really grown to love John M. Kelley, who had played McCoy in every previous Phase II episode, and I still miss him, but Mr. Bond does a great job in the role.  He sure looks the part, and he has several very emotional scenes in this episode that he’s able to play just right, not too angrily nor too softly, just right down the middle perfect.  (My only tiny complaint is that he plays up McCoy’s southern drawl just a tad too much in a few moments.  I hope he learns to let that go for future episodes.)

This episode is a great showcase for Brandon Stacy as Mr. Spock.  Mr. Stacy has appeared in the past several episodes, but this is the first time he’s really had a lot to do.  He is very solid, and I loved Mr. Stacy’s chemistry with Mr. Bond.  (I still think, as I have commented in previous reviews, that Mr. Stacy delivers his lines a little too slowly and a little too sleepily, but I have grown to quite like his interpretation of Mr. Spock.)

I really enjoyed the new Sulu, played by Shyaporn Theerakulstit, and also the new Uhura, played by Jasmine Pierce.  Both had some nice moments and made a strong impression.  I hope to see more of them both in future episodes.  I loved seeing Ensign Walking Bear, from the Animated Series.  Though where was Chekov?  Chekov has been missing in the latest Star Trek Continues episodes as well, what’s the deal?  Let’s see some Pavel Chekov love!  (By the way, I know these two Trek fan-made productions have nothing to do with one another, so hold your e-mails.)  Charles Root is, I believe, the longest-continuing Phase II cast-member, and he once again does great work as Scotty.  As for the guest stars, Rivka Raven Wood does solid work as Dr. Hamlin, the nurse who befriends Kirk in the fifties.  Clay Sayre is phenomenal as Kor, absolutely perfect in stepping into the big shoes left by John Colicos, who portrayed Kor in the Original Series episode “Errand of Mercy” (as well as several reprisals, decades later, on Deep Space Nine).

The biggest weakness of this terrific episode is the sound mix, which is wildly inconsistent.  This was a problem I noticed on the rough cut I saw of “The Holiest Thing,” but I assumed that was just because that episode was still unfinished.  I’ve never had any problem with the sound quality of previous Phase II episodes, but here it really bugged me.  Within scenes the sound quality would change dramatically from moment to moment.  It often felt as if we were switching from ambient sound recorded on the day to ADRed dialogue.  It was very amateurish and distracting, and a weird problem in an episode that is, other than that, so professionally-produced.  I don’t know what went wrong here.  (Heck, just watch the episode’s opening credits.  Brian Gross’ rendition of “Space, the final frontier…” is too quiet and it has a weird echo to it, as if it was recorded in a huge empty space.  Surely the Phase II team noticed this?  I’m surprised these issues weren’t corrected before the episode’s final release.)

There are a few plot inconsistencies in the episode, but nothing major.  (And nothing more than I’d quibble about in an average OFFICIAL Original Series episode!)  It was weird to me that we hear it will take the Enterprise two months to travel from Space Station K-7 to their new border patrol assignment… but then when Spock orders the course changed to Gateway, we hear that it will take only seven hours to get there.  Plausibility feels like it’d be somewhere in between here, guys.  At the end, aren’t we a little concerned that the Klingons now know the location of Gateway?  And do I really believe that the strength of Kirk-Spock’s connection was able to transcend time?  That’s a very “fannish” notion inherent to the original story.  It’s a little bit laughable (as is Spock’s expression of love to Kirk at the end — “I respect you” — oh, brother), but I can go with it.

A few other thoughts:

I loved the brief starship fight in orbit of Gateway.  I loved seeing those other Starfleet ships, including one that looked like an Original Series version of one of J.J. Abrams’ starship designs from his rebooted Trek films.  Cool.

Yep, I noticed original Phase II Kirk James Cawley in that one scene, and I also noticed William Shatner in The Twilight Zone playing on the TV in the background.  Three Kirks, all on-screen at the same time!  Nice!

I liked seeing Admiral Withrow from “Going Boldly” again, and I liked that he was tough with Spock but also understanding at the end.  This is an unusually well-rounded, reasonable depiction of a Starfleet admiral.

Because this story takes place earlier in the five-year mission, this episode doesn’t feature the refit Enterprise introduced in “Going Boldly.”  I like that refit design, but man, it’s pretty great seeing these gloriously beautiful effects shots of the original Enterprise in all her glory.  (Speaking of the chronology, though, I am a little confused as to when this episode is supposed to have taken place.  I read on-line that it is intended to occur between the first and second season of the Original Series, but for Kirk and Spock to have bonded so closely that their telepathic link spans time seems like it’s something that would make more sense taking place further into their years together on the Enterprise.  Additionally, there’s a Spock-McCoy scene in which the two refer to having known each other for years, so wouldn’t that mean the episode must take place later in the five-year mission?  I’m a little confused, and I suppose it comes down to which non-canonical version of the origins of these characters do you prefer.  Did they all meet back in their academy days, decades before the events of the Original Series?  Or did they only meet at the start of the five-year mission, after the departure of the Enterprise’s original doctor as seen in the series’ first and second pilots (“The Cage” and “Where No Man Has Gone Before”)?  I should also add that the idea of Spock and McCoy at odds following Kirk’s presumed death is very similar to the story of “The Tholian Web,” from season 3 of the Original Series.  I can’t decide if this similar story makes more sense to have occurred before or after the events of that episode.  Oh well, I guess it’s not worth focusing on.)

As I have often written before, the quality of this entirely fan-made production is absolutely astounding.  They have succeeded once again in creating a fully convincing new episode of the Original Series of Star Trek.  It’s the season four that never was.  Even when the amateur quality of the production peeks through, I find it very endearing.  It is a thrill to watch a new adventure of Kirk-Spock-McCoy and the Enterprise crew.  It’s a testament to the enduring power of these characters and these relationships.  Bring on the next episode!  (Hopefully a more-polished version of “The Holiest Thing,” Phase II’s version of the first meeting between Captain Kirk and Carol Marcus!)