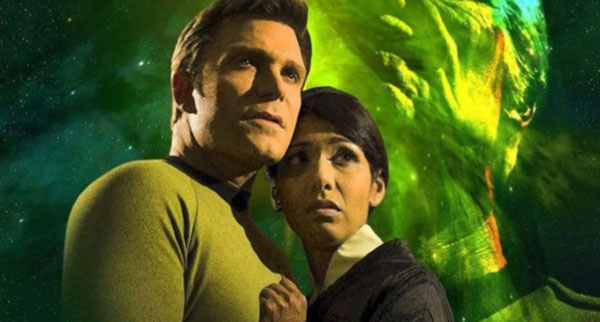 In defiance of CBS/Paramount’s outrageously restrictive new fan film guidelines meant to crush the Star Trek fan films that have flourished over the past decade, Vic Mignogna and the talented team of Trek fans who make up Star Trek Continues have released their eighth episode, “Still Treads the Shadow.”  Star Trek Continues is a fan-made project to create new episodes of the Original Series, featuring episode-length adventures of Kirk, Spock, McCoy, and the crew of the original starship Enterprise, in the style of the Original Series.  After the release of the new fan film guidelines, Mr. Mignogna announced that he would be releasing four additional episodes to wrap up his series.  It’s a shame that the series will be ending, but I am glad that Mr. Mignogna has decided to at least complete and release these final four episodes, of which “Still Treads the Shadow” is the first.

In this episode, while investigating a black hole phenomena, the Enterprise discovers the U.S.S. Defiant adrift in space.  The Defiant was last seen getting lost in interphasic space in the Original Series episode “The Tholian Web”.  But the ship has returned, with a surprising passenger on-board: an elderly James T. Kirk.  Though Captain Kirk was rescued from the Defiant in “The Tholian Web,” somehow a duplicate version of himself remained trapped on the Defiant, and he has lived his entire life in solitude aboard the lost starship, with his only companion being the Defiant’s now-sentient computer, which now calls itself Tiberius.  With both the Enterprise and the Defiant both caught in the singularity’s pull, and a vengeful Tiberius out to destroy the Enterprise in a misguided effort to protect his only friend, will two Kirks be enough to save the day?

As always, I am staggeringly impressed with the enormous skill on display in every new Star Trek Continues episode.  As I have written every single time, this episode is an extraordinarily professional recreation of the look and feel of an Original Series episode.  It is remarkable.  There is almost nothing to mark this as a fan-made undertaking rather than an actual episode of the Original Series.  The sets, the costumes, the props, all are incredibly accurate recreations of Classic Trek.

Once again, Star Trek Continues has attracted an exciting guest star.  This time it is Rekha Sharma (Tory from the reimagined Battlestar Galactica), playing Avi Samara, a scientist assigned to the Enterprise to study the black hole phenomenon, who also has a long-ago connection to Captain Kirk.  Ms. Sharma is phenomenal in the role.  She plays the character with exactly the right amount of naturalism, underplaying her lines enough to make her character feel real (avoiding the tendency of actors to over-act when performing in a sci-fi story, something that happens often even in professional productions), while also hitting some emotional notes with intensity.  She is great, and she and Vic Mignogna as Captain Kirk have a great chemistry in their scenes together.  My only regret is that Avi didn’t wind up having a larger role in the story.  This brave and loyal and intelligent woman, a wonderful new character, wound up being remarkably passive in the second half of the story.

That’s because while several previous Star Trek Continues episodes have focused on their guest star, this episode is not Avi Samara’s story at all.  This is a showcase for Vic Mignogna, who plays both versions of James T. Kirk.  Mr. Mignogna has always done a good job in the role, but he steps up nicely in his double-duty spotlight here.  Both Kirks, old and young, have several very emotional scenes in the episode, and Mr. Mignogna turns in some of his strongest work of the series.  At first, I wished they had cast an older actor to play old Kirk, rather than using Mr. Mignogna under old-age makeup.  I am not a big fan of old-age makeup, as I find that even in big-budget movies or TV shows it usually winds up looking fake.  The makeup here is actually very good, holding up under a number of close-up shots, but the problem is that old people just don’t really look like what young actors in old age makeup look like.  Still, because of the focus on Kirk, I can understand why Mr. Mignogna felt it was important to play both parts himself.  As the episode progressed, I found I agreed with his choice.  (And while the idea of an actor under old age makeup is a little silly, it also fits well into the feel of the Original Series, which of course actually did this once before, in “The Deadly Years.”  I also found the idea of a duplicate Kirk to be extremely silly, but again, official Trek has done that sort of story many times, so it certainly is a Trek type story even if it’s less than original.)

The episode was written by Judy Burns, a professional Hollywood writer who also wrote the script for “The Tholian Web” fifty years ago!!  What a coup for Star Trek Continues to land a new Star Trek script by Ms. Burns!  With her at the helm, it’s no surprise that the episode functions as a sequel to “The Tholian Web,” following up on Captain Kirk’s time lost in interphasic space and also answering the question of what happened to the Defiant.  (However, in so doing, this episode contradicts the Enterprise episode “Through a Mirror, Darkly” that presented an entirely different fate for the Defiant — that it wound up in the past of the Alternate Universe from “Mirror Mirror”.)

Overall, this is a very strong script, presenting an ambitious story with several different plot threads and character arcs.  I enjoyed all of the sci-fi mysteries (the old, duplicate Kirk, the Defiant’s artificial intelligence, the black hole phenomenon, etc.).  While some Star Trek Continues episodes have lost steam in the second half, this episode kept me very interested all the way through.  The episode was tightly plotted and well-edited, moving along at a fast clip.

The episode’s greatest strengths are the strong character arcs at its core.  The show works, emotionally.  The episode’s greatest weakness is that by the end, the plot doesn’t hold together nearly as well as it should.  After watching the episode, I was left with lots of questions.  How the heck was the A.I. Tiberius’ “kill code algorithm” hid in the subliminal messaging unit?  (Wasn’t that basically just a speaker??)  Why does McCoy get so worked up about Tiberius, the “evil twin” as he refers to the A.I., without at that point knowing anything substantial about this newly discovered intelligence?  How exactly does the Enterprise get caught in the singularity’s pull?  What does the Defiant do to seal the rift at the end?  (I’d assumed it blew up, thus falling under the Star Trek plot device category of “an exploding warp core solves all problems.”  But then Avi says, “he’s all alone,” thus suggesting that old Kirk and the Defiant survived their return to Interphasic space.  But if that’s the case, how would the Defiant’s simply passing back through the black hole collapse it?)  While I’m on this subject, what the heck does Kirk’s reply, “Not anymore,” mean??  I didn’t get that at all.

I was intrigued by the depiction of Tiberius, and I liked the brain-wave effect seen on-screen whenever the crew communicated with the Artificial Intelligence.  But I wish the episode had fleshed out this character, rather than quickly turning it into a villain the way so many previous computers/machines were on the Original Series.  The idea that Tiberius would be ferociously attached to his friend, as well as the notion that the old Kirk would eventually have to choose between this artificial friend and his former family on board the Enterprise, are all rich story ideas.  But the episode didn’t develop these concepts as deeply as I’d have liked to have seen.  Instead, Tiberius became more of a plot point than an actual character.

* I quite like the episode’s title, drawn from The Rhyme of the Ancient Mariner.

* There were a few instances in which the series’ usually terrific outer space visual effects dropped the ball, in my opinion.  The brief sequence involving an attack on a Klingon warship looked terrible, with the Klingon ship very fake-looking.  I wonder what went wrong there.  I also didn’t love the look of the singularity.  It looked cool and interesting, but incongruous with the general look of Star Trek visual effects and, in specific, the look of the Enterprise and Defiant which were usually seen on-screen with the singularity effect in the background.  That just didn’t work for me.

* Speaking of that brief Klingon scene, how is it that the destruction of a Klingon starship with all hands lost did not have any consequences later in the episode?  That really surprised me and felt like a huge missed opportunity.

* As I have commented in my previous reviews, I would love for this show to give more screen-time to the rest of the Original Series characters.  Sulu, Chekov, and especially Uhura had very little to do in this episode.  And while I enjoy continuing to see Kipleigh Brown appearing as a member of the Enterprise bridge crew, if they’re going to keep bringing her back, I wish they’d give her more of an actual role.

As always, because this fan-made episode has been so well executed, I have treated this as I would any professional piece of work, sharing what I enjoyed as well as my critiques.  But that is a compliment to Vic Mignogna and his team, and do not let any criticisms I have mentioned lead you to suspect that this is not a phenomenal piece of work, and an expression of true love to Star Trek.  I had a great time watching this episode, and I commend Mr. Mignogna and his team for continuing to do what they love, sharing their work with their fellow Trek fans, despite the recent draconian actions of CBS/Paramount.  I eagerly await the next episode.