For over a decade, Star Trek: New Voyages has been a fan-produced effort to create new full-length episodes of the Original Series, a never-made fourth season of the classic show. (The series began under the name Star Trek: New Voyages, then switched to be called Star Trek: Phase II for several years, and now they seem to be back to using the New Voyages title.)  I have been a fan and supporter of this fan-made group since I saw their second official episode, released in 2006, in which Walter Koenig reprised his role of Pavel Chekov, an enormous coup did this fan-made series.

Last month New Voyages released their tenth episode, “The Holiest Thing.”  I have been reading about this episode for years now.  (I actually reviewed a rough cut of this episode that was released to the project’s Kickstarter backers, about a year and a half ago.)  “The Holiest Thing” was supposed to have been released back in February, 2014, but was cancelled at the last minute so the production team could continue polishing the episode.  It’s been a long two-years wait.  I am pleased that the final, completed version has at last seen the light of day.  To my relief it is an improvement on the rough cut in almost every way.

This episode tells the never-before-seen story of how Captain Kirk and Dr. Carol Marcus first met and fell in love.  (Dr. Marcus’ one-and-only canonical main-timeline on-screen appearance was, of course, in Star Trek II: The Wrath of Khan.)  The Enterprise arrives at the planet Lapus III, to check in with the terraforming project overseen by Dr. Marcus.  As she and Scotty tour the facility in a shuttlecraft, an enormous explosion destroys the research facility, killing everyone present except for Scotty and Dr. Marcus.  Is young Dr. Marcus responsible for the deaths of her entire team? 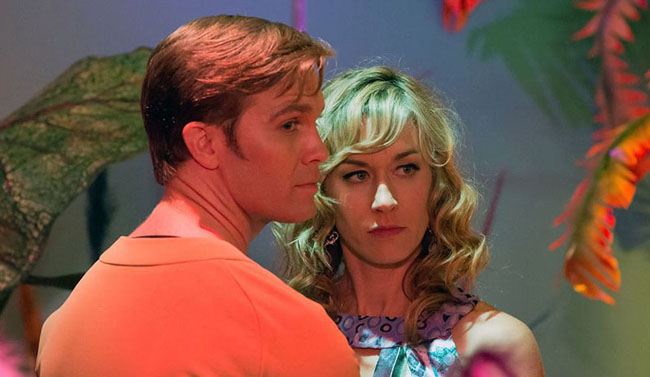 “The Holiest Thing” is a leisurely paced tale.  There is a mystery component as Kirk, Spock and Dr. Marcus work to uncover the truth about what went wrong with her terraforming project.  But the focus of the episode is on the love story between Kirk and Dr. Marcus.  Both Brian Gross (as Captain Kirk) and Jacy King (as Carol Marcus) do strong work.  Ms. King is especially good, a pleasant surprise since so much of the episode rests on her shoulders.  I like this version of a young Carol Marcus.  She is smart, persistent, and take-charge, but she’s also clearly young and perhaps in a little over her head.  (This is a far stronger depiction of Carol than the one we got in the terrible Star Trek Into Darkness.)

The rough cut of this episode suffered from terrible sound problems (with the soundtrack totally inconsistent, even within a scene, and often-times very difficult to hear and understand) and visual issues (with much of the live-action footage looking very washed out).  Thankfully, these problems have been mostly corrected.  There are still a few times when the dialogue doesn’t sound completely natural on the soundtrack, but it’s not very noticeable.  And the episode has been entirely color-corrected, bringing this episode up to the high standards this production has previously set.

This finished episode also adds a wrap-around sequence featuring Jimmy Doohan look-aline Carl Sheldon as Scotty, set in the 24th century after Scotty was rescued by the Enterprise D in “Relics.”  It’s a cool sequence, and holy cow does Mr. Sheldon look exactly like Scotty.  However, it’s an odd choice seeing as Scotty is not at all the focus of this episode.  (The New Voyages gang used this sort of device far more effectively in the Sulu story “World Enough and Time,” in which George Takei portrayed Sulu as Captain of the Excelsior, before the episode flashed back to tell a Sulu-focused story from the Five-Year Mission.)

As always for New Voyages/Phase II, the episode looks amazing, and I remain stunned at the incredible effort that must have gone into so faithfully recreating the look and feel of the Original Series: the sets, the props, the costumes, the lighting.  It’s all perfect.  And the CGI outer-space shots are absolutely stunning.  I love the new-look Enterprise that this episode shows off (a new, hybrid design created by the New Voyages team that blends the look of the Original Series Enterprise with the refit from Star Trek: The Motion Picture).  This is a far better-looking Enterprise than we got in J.J. Abrams’ Trek films.  (I also love the nice touch of using the Motion Picture warp effect when we see the Enterprise go to warp, late in the episode.)  The outer-space effects are absolutely gorgeous, one-hundred percent professional-looking.

I think the episode is a little longer than it needs to be.  For a story without many twists-and-turns (it’s pretty obvious that Carol Marcus wasn’t actually responsible for the accident that destroyed her project), I started to get a little antsy in the second half.  I also wasn’t completely satisfied by the ending of the story.  I know that Carol and Kirk didn’t stay together, and so the story has to split them up in the end, but neither Kirk nor Dr. Marcus act like themselves in their final scene together.  The episode didn’t convince me that Kirk felt so deeply about Carol that he’d be willing to propose and give up his command for her.  Nor did it make much sense that Carol would decide to leave him and raise their child on her own.  Both characters felt like they were acting that way only because the story needed them to, not because it made much character-sense.

By the way, as I commented in my review of the Rough Cut, the timeline of this episode doesn’t make much sense.  I’d always assumed that Kirk and Carol had their fling many years before Kirk was captain of the Enterprise.  For David to have been conceived during the Five-Year Mission, that would make him only around fifteen years old during the events of Star Trek II.  My feeling is that David was at least a decade older than that.

Speaking of timeline problems, I could have also done without the introduction of a Ferengi character in the episode’s final act.  The actor is great, and the make-up looks terrific.  But Next Gen clearly established that no human had ever seen a Ferengi before Picard and the Enterprise D encounter them in the first season of Next Gen.  But in this episode Kirk spends a lot of time chatting with a Ferengi, who clearly identifies himself as a Ferengi.  Oops.

As always, I am incredibly impressed by the effort and love put into this production.  “The Holiest Thing” might not be the best episode that the New Voyages/Phase II gang have ever produced, but it’s a very strong effort and one that I quite enjoyed.  I am very eager for New Voyages’ next episode, “Torment of Destiny” which promises to be a sequel to the Original Series episode “For the World is Hollow and I Have Touched the Sky,” guest-starring Battlestar Galactica’s Richard Hatch!  I can’t wait!