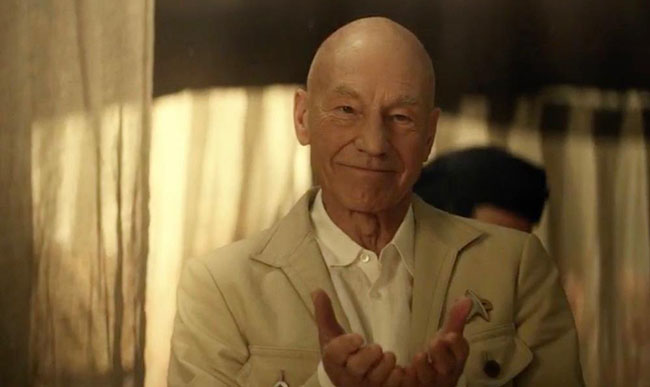 I enjoyed the premiere of Star Trek: Picard but I thought episodes two and three were very mediocre.  Thankfully, I thought the next three episodes were a significant improvement, though the show is still far more flawed than I would have hoped.  Let’s dig in.

* I liked the time given to the lengthy opening flashback, and I enjoyed the sweet scenes seeing Picard’s connection with these Romulan women and especially with the young boy, Elnor.  It could be seen as out of character for Picard to be so close to a child — since the character, when first introduced on TNG, famously hated children — but Picard had already significantly mellowed by the end of TNG, and this flashback is set many years further after “All Good Things…”  So this works for me.  The real problem, though, is that Picard is coming off as worse and worse with each subsequent episode-opening flashback!  It’s HORRIBLE to think that Picard would abandon these people, and that child.  He never once even tried to come back to that planet ever again??  He never once even contacted them on subspace after he left Starfleet??  That’s what’s out of character for Picard (not his friendship with the boy)!!  The backstory for Picard on this show is a huge problem for me.

* I love the idea of Romulan warrior nuns!  And I really loved the actress, Amirah Vann, who plays the main Romulan woman (Zhani).  I loved the young kid who played Elnor as a boy.  Grown-up Elnor seemed OK, too, but it was hard to judge in this episode since we didn’t spend much time of him.  (Between his name and his look, he’s a little too Lord of the Rings elf-ish to me, at first glance…)

* While the plot is still moving glacially slowly, I was, for the most part, more involved with this episode because the dialogue was better/more interesting than what we got in episodes two and three. If the plot isn’t progressing, I at least want good character moments, and we got some good stuff here.  I really liked the “secret meeting” scene on the holodeck (though, wow, what a transparent way to continue using the set of Picard’s home built for the first episode), and all of the character interaction there.  I enjoyed the funny banter among the characters.

* The idea that the rule of law is breaking down on the edges of Federation space is interesting.  But here again, the show needs to do the work of better developing the backstory of what’s been happening and how this all came about.  Is the Federation just completely useless in this era??  That’s not an idea that makes me happy.

* Planet “Vashti” is funny to me.  I guess planet “Esther” is a much nicer place.

* The idea of a planetary shield is ridiculous, and is the type of fantasy science magic that’s far more at home in Star Wars.  I object to this sort of thing in Trek.  (The energy required to create a shield around an entire PLANET is unimaginable…)

* I like that Soji is smart enough to realize that there is something going on with Narek.  Also, I liked seeing Soji and Narek drinking a blue beverage that is presumably Romulan Ale.

* I continue to HATE the scenes of Narek and his evil/sexy sister.  Ugh.

* I liked seeing Picard step on the “Romulans Only” sign.  It’s incredibly stupid for this old man to pick a fight with an entire bar full of Romulans, but this is what Trek should be standing up for, morally.  I also loved Picard’s indignation at Elnor for killing the Romulan former Senator.  That is very in-character for Picard and perfect for Trek.

* I loved seeing a TOS-era Romulan Bird of Prey!  The ship looked amazing.  I wish I better understood who was on that ship and what they wanted/what they were doing.

* The space battle was very cool, but we need more context.  Who are the Romulans on that old ship, and what did they want?  The visual effects were terrific, but the storytelling was choppy.  The battle was harder to follow than it should have been.  I like the IDEA that the Bird of Prey was trying to force Rios’ ship into the planetary defense grid, but they didn’t quite sell that idea visually or dramatically.

* I loved getting to see yet another Rios hologram.

* I liked the cliffhanger with the reappearance of Seven of Nine. 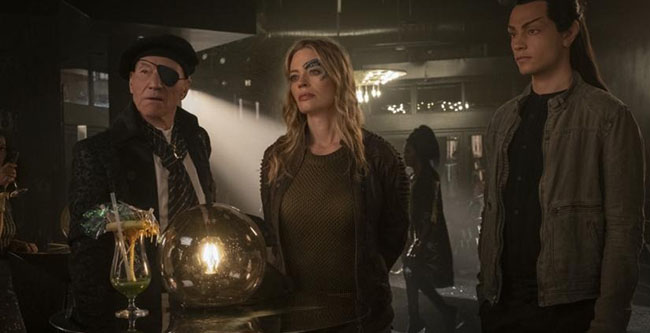 * It was great to see both Icheb (a supporting charater from Voyager) and Bruce Maddox appear in this episode!  However, I was bummed that they recast both characters.  Manu Intiraymi placed Icheb for all of his appearances on Voyager, but the character was played by Casey King here; while Brian Brophy played Bruce Maddox in TNG’s “Measure of a Man,” but he was played by John Ales here.  Why did they recast these roles??  I’d have vastly preferred to have seen the original actors.  I was also bummed that they killed off both characters.  The death of Icheb in the opening scene was quite a surprise — and it was extremely gruesome for a Star Trek show!  The cliffhanger murder of Maddox by Dr. Jurati was also a shock.  (That’s not a criticism — I like it when the show can surprise me.  I just wanted to see more of both of these characters.)

* We hear a little more about the “Rangers”, the vigilantes with whom Seven is involved (did she start the group?) who are trying to keep order on the frontier.  This is an interesting idea which I wish the show would explore more.  (Though the name “Rangers” is an overused one at this point, from The Lord of the Rings and then from Babylon Five.)  I am not opposed to the idea that the Federation is having problems.  But I am getting nervous that this show’s depiction of the Federation isn’t very much in line with the idealistic vision we’re used to.  Surely Picard isnt the ONLY Starfleet officer who sees this?  I was also concerned by Seven’s murder of Bjayzel at the end.  If this is one step on Seven’s journey, which will continue over the next few episodes, then I am OK with this.  I don’t mind seeing characters on Star Trek make bad choices.  But if this is the last we see of Seven on the show, then I hate the idea that the “cool” ending they gave her was a cold- blooded murder.  That feels like a betrayal of the character, and of Trek’s guiding principles.

* Jeri Ryan was terrific as Seven of Nine.  I have no great love for Voyager, but I really enjoyed Ms. Ryan’s work here.  I wish we’d gotten to better understand Seven’s current life and what’s driven her to this point, but Ms. Ryan’s strong performance really invested me in where this character is at.  It’s sad to see Seven be so lost.  It does fit her character as a former Borg that she’d feel the need to “maintain a sense of order” in the galaxy.  I loved when Seven tells Picard “I was not entirely candid with you” — that was a great Seven line!  Also, I’m glad they gave her a cool and normal-looking costume, as opposed to the ridiculous over-sexed catsuit she had to wear on Voyager.

* I loved that Bjayzel serves Maddox tranya (a nice TOS reference).  I also smiled to see signs for Mr. Mot’s Hair Emporium as well as Quark’s Bar on Freecloud… though upon some reflection, neither really makes much sense.  I don’t believe Quark would ever leave DS9, and why would Mr. Mot give up a nice cushy life within Starfleet and the Federation to live on the unlawful, dangerous world of Freecloud?  Freecloud itself feels like something from out of Firefly or Blade Runner more than Star Trek, though I’m open to the show showing us different types of worlds within the Trek galaxy, and I laughed at the holographic pop-up ads.

* Wow, the actress who played Bjayzel was a DEAD RINGER for TNG-era Marina Sirtis (who played Counselor Troi)!!  That was weird!!

* It’s interesting to learn that the Romulan Neutral Zone — a fixture of Trek interstellar politics ever since the TOS episode “Balance of Terror” — has collapsed.

* Picard’s goofy costume and silly French accent was too ridiculous for my tastes.

* Raffi’s scene with her estranged son was too soap-opera-ish for me.  Though I’m intrigued to learn about the “conclave of eight” and her conspiracy theories!  Tell me more!

* I really enjoyed the short, final scene between the two former Borg, Seven of Nine and Picard.  His admission that he never felt he fully regained all of his humanity is sad. 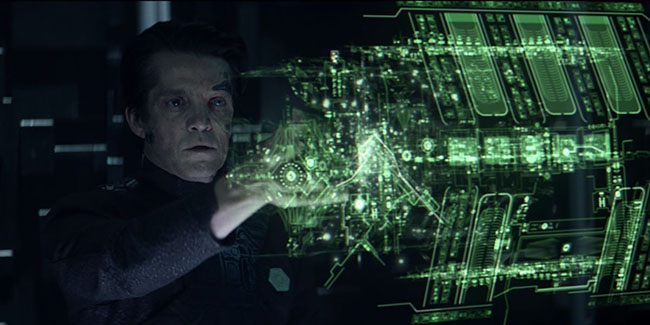 * It was cool to finally get to spend more time on the Borg cube (“the Artifact”) and to better understand what’s happening there, and how Hugh’s Borg Reclamation project is working with the Romulans.  I’m not quite sure why most of the former Borg on the ship seem like such zombies, when both Hugh and Seven were able to regain their humanity far easier.  But still, it’s a cool concept, and I enjoyed Picard’s personal revelation that the Borg are victims, not monsters.

* It’s so great to see Hugh again, and I’m glad this episode finally gave Jonathan Del Arco some meaty scenes to play.  His reunion with Picard was very emotional.  I also loved how deeply the episode explored Picard’s fear and horror at having to return to a Borg cube.  All of that stuff was great, and Patrick Stewart killed it, of course.  I liked Picard’s line “they don’t change, they metastasize.”  I liked the cool shot of Locutus on a screen, superimposed over Picard’s actual face.

* The scenes of the two Romulan siblings continue to be excruciating.  We’ve gotten the exact same scene about five times now!!  Boring.

* I didn’t love the retcon business of the Romulans all having three names.  That feels inconsistent with everything we’ve seen of Romulans previously.  (Though I smiled that Narek’s “true” name was Chaya — which, like planet Vashti, is a very Jewish-sounding name!  Michael Chabon’s influence, I presume?)

* The Romulan mind-trip room was weird but interesting.  This is Romulan world-building that worked far better for me than the name business.  What didn’t work at all for me was Narek’s plan to kill Soji by means of a slow-moving red gas.  Why not just stab her with a knife or shoot her with a phaser?  The Artifact is under Romulan control, so it’s not like he’d really have to hide his actions.  (The Romulan guard outside the room didn’t seem to mind when he saw Narek had released the red gas.)

* Raffi was great in the scene in which she had to convince her friend in Starfleet to give Picard diplomatic credentials.  But Picard was surprisingly unconcerned by the terrible state Raffi, who’s supposedly a close friend, is in.  This did not make Picard look good.

* It was cool how Hugh manipulated the Borg tech at the end, allowing Picard & Soji to escape.  Though Picard has probably just totally screwed over Hugh and his Borg Reclamation project, right??  (Also, the magic transporter door is problematic.  I like the idea that the Borg continue to assimilate advanced technology.  But if this cube has that tech, then ALL Borg would now have that tech, because of their shared collective, right?  So why aren’t the Borg using that to just magically walk onto any planet or ship they want to assimilate?  First Contact made the same mistake by revealing that one Borg cube had a magic time-travel sphere…  But this is a plot hole I can live with, because the sequence surrounding it was tense and very well-executed.)