Skip to the content
HomeWritten PostStar Trek: Prey Book 3: The Hall of Heroes

John Jackson Miller’s Klingon-focused trilogy of novels, titled Prey — part of Pocket Books’ celebration of the 50th anniversary of Star Trek — wraps up with book three: The Hall of Heroes.  The menace of the Unsung, that cadre of discommendated Klingons, has mostly been resolved, but now a new and greater threat to galactic peace has emerged.  The Breen have stepped up their manipulation of their fellow Typhon Pact member the Kinshaya, tricking the Kinshaya into launching a full-scale invasion of Klingon space.  With Martok’s hold on power already weakened by the Unsung attacks and the manipulations of Lord Korgh, the would-be heir of Kruge (the Klingon commander killed by James T. Kirk on the Genesis Planet a century earlier), having threatened to tear apart the peace treaty between the Federation and the Klingon Empire, Captain Picard of the Enterprise, Admiral Riker of the Titan, and Captain Dax of the Aventine all find themselves scrambling to keep up with elusive enemies all around and a situation that threatens to spiral completely out of control.

I loved John Jackson Miller’s first two Prey novels.  Click here for my review of book one: Hell’s Heart, and here for my review of book two: The Jackal’s Trick.  I did mention, though, in my review of The Jackal’s Trick, a concern that the plot-twists at the end of the novel felt a bit like an effort to stretch the story out needlessly into a third book.  By the end of book two, I’d felt that the story was mostly over and wasn’t sure there was really a third book’s worth of story left to tell.

I shouldn’t have doubted, because right from the start I thought The Hall of Heroes was terrific, and I was happy with the different directions in which Mr. Miller took the story in this third and final book.  I was not expecting the Breen and the Kinshaya to wind up playing such a major role in a story that had, through the first two books, been very Klingon-centric.  But I loved how Mr. Miller was able to expand the scale of his story, bringing in a number of new threats and challenges for our heroes.  This didn’t feel like plot-driven stretching, these new developments flowed smoothly out of what had come before, unexpected but logical ripple effects from Korgh’s plots and schemes.

Book 2 ended with the twist regarding the Orion, Shift, and I loved how Shift became a major character here in book three.  One of the nice aspects of this story’s being told over three books is that Mr. Miller has had the time to flesh out lots of fascinating nooks and crannies of his story.  That comes into play right from the beginning of The Hall of Heroes as the book opens by stepping back to show how the Orion Shift originally came to be allied with the Breen, and why she believed so completely in their cause.  I’ve enjoyed the efforts of Pocket Books’ Trek authors to flesh out the Breen (a race who played a major part in the final season of Deep Space Nine but about whom we learned very little on-screen), beginning with David Mack’s Zero Sum Game.  But Mr. Miller presents one of the best depictions of the Breen so far, and in specific he gives us, through Shift, a wonderful argument in support of the bizarre, faceless Breen society and why that could be seen as a positive.  I loved that about this book.

I was also pleased to see Mr. Miller exploring the Kinshaya, the Typhon Pact member about whom we know the least.  Mr. Miller’s story built wonderfully upon the foundation established in Christopher Bennett’s Typhon Pact e-book The Struggle Within.  I am so glad I finally had a chance to read that 2011 e-book a few months ago, before reading this story!

Once again Mr. Miller has crafted a vast story, featuring many main characters and taking place across the galaxy in multiple different locations.  And once again, Mr. Miller has made balancing all of those elements seem easy, as his story is fast-paced and hugely enjoyable, while also being very clear and easy to follow.  We never lose the thread of who is where and doing what, despite all of the many different characters and locations being constantly juggled.  It’s great.  Mr. Miller has crafted a gripping read, one that is fun and intense.

I was pleased to see that Captain Picard, Admiral Riker, and Captain Dax were all involved with the story, each doing their part to move events forward.  I have enjoyed Mr. Miller’s spotlight on Worf and the way he has given Worf a strong role to play in moving the story forward.  Here in The Hall of Heroes, I loved watching the gentle but firm way that Worf nudged Valandris and her fellow Unsung back onto the path of honor, and it was great having Worf be the one to convince the High Council, at the end of the book, to make an important change to a long-held Klingon practice.

I love the way Mr. Miller has used the clone of the great Klingon Kahless (introduced in the seventh season Next Gen episode “Rightful Heir”), a character who no one (including the Next Gen writers) ever seemed to really know what to do with.  And yet here, Mr. Miller has made Kahless into a wonderful character with a central role to play in this story.  I love the arc of self-discovery that Mr. Miller has given Kahless in this trilogy, and the place where Kahless winds up at the end of the story is just perfect.

I also quite enjoyed the way Mr. Miller wove back in the character of Ardra (from the fourth-season Next Gen episode “Devil’s Due”), and how Mr. Miller developed a whole backstory for the society of magicians and con-artists from whom Ardra came.  I enjoyed the way Ardra and her fellow “truthcrafters”, including the Ferengi technician Gaw, were woven into this story.

If I have any complaint with the story it’s that poor Martok gets totally sidelined.  I wish Martok had been more central in this story.  What we see of Martok makes him look very weak and helpless, which feels out of character for the great Klingon general.  (Once again, as I did in my previous reviews, I wonder whether what’s at issue here is that Mr. Miller is perhaps just not that familiar with Deep Space Nine…?)  I was also surprised that the new Federation President, or any other civilian leader, was not involved in this story which depicted a profound schism between the Federation and the Klingon Empire.  True, in the various Trek TV shows and movies it was always the Starfleet captains handling these sorts of situations, but the last decade-plus of Star Trek novels (beginning with Keith R.A. DeCandido’s fantastic Articles of the Federation) have wonderfully fleshed out the Federation’s bureaucratic leadership, and so that element felt missing from this trilogy.

But these are minor issues.  The main weakness of the book is its terrible cover.  I complained about the cover for book two, but this cover to book three is even worse.  Take a look at this Photoshop nightmare: 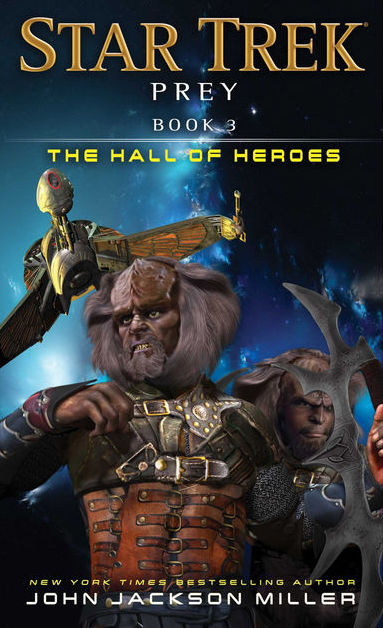 Can you believe that?  What a mess?  What is going on with Kahless’ chest??  Look at the fake-looking goatee plastered over his face!  And look at the terrible way Kahless’ left hand is Photoshopped over that bat’leth!!  Is that hand supposed to be HOLDING that bat’leth??  Urgh.  This cover is embarrassing, and it’s a double shame because the novel behind the cover is so good.

Bravo to John Jackson Miller for crafting such a strong story and for sticking the landing here with book three.  This was a terrific story, fun from start-to-finish across all three novels.