Skip to the content
HomeWritten PostStar Trek: The Weight of Worlds 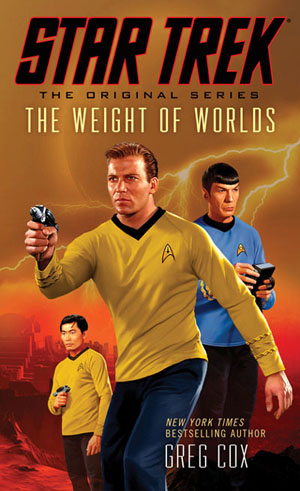 Star Trek: The Weight of Worlds

I have been catching up with a number of stand-alone Star Trek novels telling stories from Captain Kirk’s era that had been sitting unread — for far too long! — on my bookshelf!

After reading Greg Cox’s novel The Rings of Time, I moved on to Mr. Cox’s next book: The Weight of Worlds.  As was The Rings of Time, this book is set during the era of the Original Series and the Enterprise’s five-year mission.  A Federation scientific institute at the edge of space is attacked by invaders from another dimension.  These invaders use gravity-based weaponry to subdue the peaceful scientists and thinkers.  When the Enterprise responds to the institute’s distress call, they are alarmed to discover that the aliens have converted every one of the institute’s inhabitants into true believers in the Truth that they espouse.  Captain Kirk leads a rescue mission, but he and Spock are captured and sent to the aliens’ home dimension, while Sulu and security officer Fawzia Yaseen are trapped on the planet, surrounded by the fierce aliens and their captive converts.  Meanwhile, when the aliens turn their gravity-based weaponry against the Enterprise, Scotty is grievously injured, leaving Uhura in command of the ship.

The Weight of Worlds is another great stand-alone adventure from the Original Series era by Mr. Cox!  I loved his introduction and development of this new alien race, the Ialatl, and their internal struggle between the fanatical Crusade and the dissidents within their society.  It’s great to see a completely new alien race introduced, and I enjoyed the way Mr. Cox brought this culture to life.  Their gravity-based weaponry was a neat new idea, and I loved seeing the glimpses into how this gravity-technology had transformed Ialatl society on their home planet.

It was great getting to see Uhura take center stage in this story.  I loved seeing her in command, and I was pleased that Mr. Cox depicted her as being completely competent when thrust into that role.  There was a moment in which the Crusade leader threatened Sulu as a way to try to get Uhura to give him what he wanted.  I was happy to see that Uhura stood firm, despite the threat to her shipmate and friend.

I also enjoyed seeing Sulu in an important role, as he is forced to fend for himself on the planet’s surface when the rescue mission goes sideways.  It’s nice to see Sulu get to be a hero, showing bravery and cleverness as he fought to stay alive and find some way to turn the tables on the alien invaders.

I also enjoyed the introduction and development of the Middle Eastern Enterprise security officer Yaseen.  It’s great to get to see a Middle Eastern character, and I enjoyed the progression of Yaseen and Sulu’s relationship throughout the story.  At first, I feared that the suggestion of a romantic relationship with Sulu meant that Yaseen was doomed, because as far as we know, Sulu doesn’t end up with her and she does not appear in future stories.  But thankfully, Mr. Cox does not go that route.  I’d love to see this character reappear in a future story!!  I hope she does.

It’s a minor detail, but I liked learning that the brave and intelligent head of the Federation scientific institute was involved in a same-sex relationship.  It’s lovely to see that normalized in the Star Trek utopian future.  I am glad this detail was included, and I am also glad Mr. Cox didn’t feel the need to make a big deal of it in the story.

I quite enjoyed the number of times that Mr. Cox allowed Kirk and the other Enterprise characters to refer back to previous adventures, from the Gorn attack on Cestus III (from the Original Series episode “Arena”), to the alien hardware on Miramanee’s World (from “The Paradise Syndrome”), to Landru and Beta III (from “The Return of the Archons”), and more.  These continuity nods are fun, and they also allow the characters to feel more like real people.  It’s natural that Kirk & co. would remember their previous adventures, and that occasionally new events would remind them of their previous experiences!  I thought this was a lovely aspect of Mr. Cox’s writing.

I criticized the cover of The Rings of Time, and I have to sadly say that the cover of The Weight of Worlds is another stinker.  It’s very stiff and awkwardly posed.  It has a very retro feel, reminiscent of the style of painted covers from Trek books from two decades ago.  I think the boring old-style-looking cover is a reason that I waited so long to read this book.  I am glad that I finally got to it, as it’s a great story.