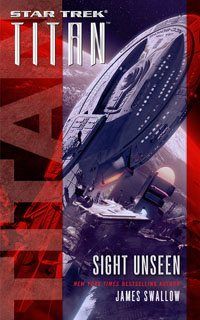 The 2013 five-novel “The Fall” reshaped the status quo in Pocket Books’ wonderful expanding series of Star Trek novels, which together have continued the stories of the 24th-century Trek adventures following the end of the official on-screen canonical adventures (in the Next Gen movie Nemesis and the series-finales of Deep Space Nine and Voyager).  Dayton Ward’s novel Armageddon’s Arrow updated us on Captain Picard and the crew of the Enterprise E as they left known Federation space to begin a new mission of exploration, while Jeffrey Lang’s Force and Motion checked in on some of the DS9 crew, specifically Chief O’Brien and Nog.  James Swallow’s new novel, Sight Unseen, circles back to the newly-promoted Admiral William Riker and the crew of the Titan.

Whereas Picard and the Enterprise have been given a new mission of discovery, the Titan has lost theirs, with Fleet Admiral Akaar preferring to keep the newly-minted Admiral Riker and his former ship closer to home to help deal with the upheaval following the events of “The Fall.”  When a Starfleet ship that was helping an alien race called the Dinac, just taking their first steps into interstellar travel, goes missing, Riker and the Titan are called to investigate.  What they discover is terrifying evidence that seems to point to a new invasion of Federation space by the aliens from the season six Next Gen episode “Schisms.”

“Schisms” is not a particularly classic episode, but nevertheless its open-ended ending is one that feels ripe for follow-up.  I’ve been enjoying how so many of the recent Trek novels have been picking up dangling story-threads from various Next Gen episodes.  (Absent Enemies is a sort-of sequel to “The Next Phase,” while Force and Motion picks up the story of Captain Benjamin Maxwell from “The Wounded.”)  I really enjoyed the way Sight Unseen fleshes out those unnamed aliens from “Schisms.”  Mr. Swallow’s book does some enjoyable world-building, expanding upon the glimpses of those aliens that we got in “Schisms” to tell us more about their society, their methods and their goals.

It’s great having Mr. Swallow back writing another Titan novel.  I enjoyed his first Titan novel, Synthesis, and I loved his Titan-focused entry in “The Fall” series, The Poisoned Chalice.  Sight Unseen is another very strong installment of the continuing Titan series.  I love that, over the past decade, these Titan novels (exploring Will Riker’s first command after finally accepting the Captain’s chair of a Starfleet vessel following the events of Star Trek: Nemesis) have been such a consistent part of Pocket Books’ continuing series of interconnected Trek novels.  Following Riker’s promotion to Admiral in “The Fall,” I wasn’t sure if that meant an end to the Titan series, but thankfully Mr. Swallow’s Sight Unseen capably demonstrates how this series can continue.

I love the way this novel continues to develop the extensive, multi-species Titan crew that has been so ably introduced and nurtured over all of the previous Titan books.  Most of these characters were created new for the novels, and over the series of Titan books they have developed into wonderfully rich, complex characters.  It’s great getting to see Christine Vale, Melora Pazlar (who actually appeared on-screen in an early DS9 episode, “Melora”), Doctor Ree, Ranul Keru, Dakal Zurin, Torvig Bu-Kar-Nguv, Xin Ra-Havreii, Aili Lavena, Bowan Radowski, Olivia Bolaji, Gian Sortollo, Dennisar, and so many more characters again in this novel.  Plus of course it’s great to catch up with Will Riker, Deanna Troi, and Tuvok and to see their continued development.

I was surprised, but very pleasantly so, by how many characters from The Poisoned Chalice continued to play a part here in Sight Unseen.  Riker’s Caitian aide Ssura has accompanied the new Admiral to Titan, which makes sense.  The merging of the Artificial Intelligence SecondGen White-Blue with a hologram communications program was an important plot point in The Poisoned Chalice, but I hadn’t expected that character to appear again.  I am thankful that Mr. Swallow decided to continue exploring this newly-created merged being.  I for sure never expected to see Dalit Sarai again.  She also was a plot point in The Poisoned Chalice, but she only appeared briefly in the novel and after crossing Akaar in that book her story certainly appeared to be over.  It was an interesting choice to have the character assigned to Titan as First Officer following Christine Vale’s promotion to Captain.  Sight Unseen’s final chapter emphasizes Sarai’s dual loyalties, and it will be interesting to see where this character goes from here.

I like the many ways in which this novel followed up on the events of “Schisms,” not just in its exploration of the alien race (that the book names the Solanae) but also in the psychological scars the experience left on Riker and the others involved.  It’s funny, the character of Sariel Rager has been a minor character in several previous Titan books, and I assumed that she was a created-for-the-novels character like several of the ones I’d mentioned previously, but this novel reminded me that actually this character appeared in several Next Gen episodes (in minor, usually non-speaking appearances) and also that she was one of the Enterprise crew-members abducted and experimented upon in “Schisms.”  I had no idea!!  That was a cool connection, and I liked how Mr. Swallow took the time to explore, in this book, the way she had been affected by those events.

Probably my only complaint about the novel concerns the character death at the end of the book.  I am very conflicted about this sort of thing.  On the one hand, I love any story (in a movie, TV show, book series or comic book series) that has the guts to occasionally shake things off and kill off (or otherwise write off) characters.  It’s certainly realistic that — as opposed to the Trek TV shows where you pretty much knew all of the lead characters would be OK — sometimes when a starship encounters a dangerous situation, someone might get killed.  This enhances the realism of the story, and certainly ratchets up the intensity and the drama.  It’s nice to know that in these Trek books, characters are not safe.  On the other hand, the Trek books have killed off a LOT of great characters over the past few years.  I miss some of those characters, and I have a lingering feeling that some of those deaths were wastes of a great character.  I have a heavy dose of that feeling after the death here in Sight Unseen.  I think that this was a great character who still had tremendous potential for many more stories.  I don’t feel that I need these character deaths to hook me into these Trek books — I am already in! — and frankly when reading these Trek books I am not opposed to getting a happy ending.  So, like I said, I’m torn.  Intellectually I understand why these choices have been made, to kill off some of these characters, but emotionally I don’t love it.

OK, I have one other quibble.  Titan takes some terrible damage over the course of this novel.  There’s a particularly intense sequence in the middle of the novel in which alien orb/tentacle creatures take control of the ship’s replicators and use them to replicate more and more of their vicious selves.  This is one of the best sequences in the novel.  But following all of that — in which not only are the creatures able to burrow into and disable so much of the Titan’s computer hardware, but then the Titan crew are forced to destroy every single replicator on board the ship in order to stop the creatures — as well as the events of the novel’s climax in which the Titan plows into an alien installation, I was surprised that the book seemed to end with the ship’s crew having been able to fully repair the ship so they could head off merrily to their next mission.  That didn’t feel plausible to me, especially with the replicators all out of commission (thus leaving the crew unable to replicate new parts/supplies for the repairs).  I’d have liked to have seen the consequences of these events explored a little more at the end of the book.  Oh well.

Sight Unseen is a great book.  It’s a strong new installment in the Titan story-line, and also in the continuing over-all story running through all of these Star Trek books.  I am eager to see where all of these characters go next.