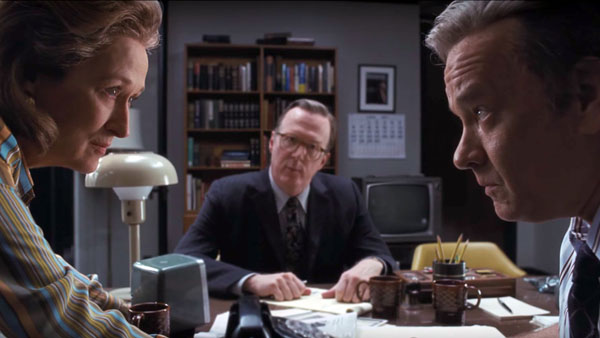 In 1971, the New York Times obtained a secret study prepared by the Department of Defense on the history of the United States’ involvement in Vietnam from 1945-1967.  These documents demonstrated that a succession of Presidential administrations had been lying to the U.S. public about the war.  The Times published three articles featuring excerpts from these documents, dubbed the Pentagon Papers, before the Nixon Administration obtained an injunction forcing the Times to cease publication of the Papers.  When the Washington Post obtained the documents, executive editor Ben Bradlee and Post publisher Katharine Graham chose to defy the Nixon Administration and publish the Pentagon Papers in their newspaper.  By taking that action, they threw the future of the Post into question and risked possible jail time in a confrontation with the White House over the principle of freedom of the press that would wind up being decided by the Supreme Court.

The Post would be a magnificent film had it been released at any previous point in Steven Spielberg’s career.  But coming now, at this point in time, it is not just a great film, it is an important one.  The film is set almost forty years ago, and yet it feels like it could be taking place today.  (Change some of the names and you realize that, in fact, it pretty much is.)  The Post depicts a Presidential administration that chooses to deflect criticism by attacking the media, by whipping up public sentiment against the press and taking actions to curtail the very existence of an independent press.  It is striking to see the many way in which the story of the Pentagon Papers and the Nixon White House’s battles against the Washington Post echo the news we are reading about in the newspaper right now.  These philosophical battles for the soul of our nation that are depicted in The Post are taking place, again, right now, whether most Americans realize it or not, and the results will determine the future of our democracy.

The Post mounts a powerful defense for the central importance of a free press.  Both Tom Hanks (as Ben Bradlee) and Meryl Streep (as Katharine Graham) have powerful, emotional moments in the film in which they deliver stirring monologues making this point.  This is a film that every American should see.

But putting all that aside, it’s also just a dang great film.  Mr. Spielberg has taken these historical events and brought them to riveting life, and he has done it without using any showy tricks or dramatic directorial flourishes.  Everything in the film feels quiet and restrained.  Even John Williams’ score — which is excellent, of course — dials down Mr. William’s usual bombast and sweeping emotional beats.  The film doesn’t need any of that.  It works because these actual historical events are incredibly dramatic, because the film’s script (by Liz Hannah and Josh Singer) is tight and sharp, and because, as usual, Mr. Spielberg has assembled an extraordinary cast to bring this story to life.

The combination of Steven Spielberg and Tom Hanks is always a winner, and The Post continues their incredible streak.  It’s tough to compete with Jason Robards’ iconic portrayal as Post editor Ben Bradlee from All the President’s Men, but by the end of Mr. Hanks’ first scene in the movie (a taut breakfast meeting between Bradlee and Katharine Graham), he has made you forget all about Mr. Robards.  Mr. Hanks’ natural charisma is perfectly utilized in the role of the fierce, whip-smart Mr. Bradlee, and his all-American persona makes him the perfect person to embody the principles of freedom of the press that Mr. Bradlee, and the film, champion.

The great Meryl Streep is phenomenal as Katharine Graham.  It’s incredible to see her and Tom Hanks on screen together; their scenes together sparkle and crack.  I was delighted by how strongly the film focused on Katharine Graham’s involvement in these events.  Ms. Graham is actually more of a focus of the film than is Mr. Bradlee, which is a wonderful choice, and one that enhances the feeling that this film is very much of the moment.  The film takes a great deal of time to show us the many ways in which Ms. Graham was dismissed and overlooked by the men around her.  Ms. Graham was thrust into the position of Post publisher upon the death of her husband, and so she was one of very few women in such a position of authority at that time.  The film is as much about her methods of navigating the condescending attitudes of all of the men around her, and her journey towards gaining the self-confidence needed to take control of her life, as it is about the issues of freedom of the press that I discussed above.  One of the most striking scenes in the film, for me, is the moment in which Ms. Graham walks into the American Stock Exchange, to celebrate her move to take the Washington Post public.  As she walks up the stairs, she moves through a large group of women, and for a second your mind wonders, who are those women and what are they doing there?  And then she opens the doors and we see all the men inside, and we realize that these were all of the wives, left waiting outside.  The shot is only a few seconds long, but it hits with the force of an anvil.  Later, towards the end of the film, after the Post is vindicated by the Supreme Court ruling, as we see Ms. Graham walk through the crowds, the camera lingers on the women looking admiringly in her direction, and the point is clearly made.  That this is not just a story about freedom of the press, but also about women’s liberation and equality only makes The Post even more important, even more powerful, coming in the midst of the current #MeToo movement.

As is always the case with a Steven Spielberg film, he has assembled a remarkable cadre of actors to fill out all of the supporting roles.  The Americans‘ Matthew Rhys is fantastic as Daniel Ellsberg, the man who leaked the documents.  I was delighted to see the Mr. Show reunion, with both Bob Odenkirk and David Cross (under a magnificent hair-piece) as fellow editors of the Washington Post.  The West Wing’s Bradley Whitford is phenomenally distasteful as the smug, condescending Washington Post board member.  Bruce Greenwood kills in his few scenes as Robert McNamara (and his makeup was terrific — they really made him look like McNamara!).  Jesse Plemons (Breaking Bad, Fargo) is great as the Washington Post lawyer horrified by Bradlee’s belief that they should publish the leaked Pentagon Papers, and I was delighted and surprised when Zach Woods (Silicon Valley) popped up as a fellow lawyer.  Neither Sarah Paulson (The People v. O.J. Simpson) or Alison Brie (Mad Men, Community) have too much to do as Ben Bradlee’s wife Tony or Katharine Graham’s daughter Lally, respectively, but they both bring their A-game to their few scenes.  And there are many other wonderful actors who I have not named.  This powerfully deep bench elevates every scene of the film.

Quite a few previous Steven Spielberg movies (I refer you to Amistad and Bridge of Spies) have built to a triumphant final sequence featuring arguments before the Supreme Court, and so I had a smile as The Post headed in that same direction in the third act.  I was a little surprised that the film wound up skipping over the actual arguments before the Court, but I guess Mr. Spielberg figured “been there, done that.”  Plus, we’d already gotten a number of wonderful scenes and speeches that made the film’s main points about the essential nature of a free press to a functioning democracy, so we didn’t need to hear that all again.

I’m happy that, a few months ago, I watched HBO’s documentary on the life of Ben Bradley, The Newspaperman: The Life and Times of Ben Bradlee.  It’s not the most excitingly-put-together documentary, but Mr. Bradlee lived a fascinating life that is worth learning about.  And that backstory gave me a better understanding of the backstory behind the events (and many of the characters) depicted in The Post.

I loved the way the staging of the film’s final scene (which, of course, depicted the Watergate break-in) was set up to parallel the similar sequence that opened the seminal 1976 film All the President’s Men.  I also liked how The Post’s simple white-on-black opening title cards echoed the similar title cards in All the President’s Men.  (The day after seeing The Post, I rewatched All the President’s Men, which remains a fantastic film and which makes a perfect double-feature with The Post.)  These connections are enjoyable, and they also make an important point about the context of the events depicted in this film.  The Pentagon Papers story was only one aspect of the Nixon Administration’s misdeeds, and only one example of the attempts by a number of Presidential administrations in the twentieth century (and beyond) to conceal important truths from the general public.  That we know anything about these events is due to the efforts of some extraordinary journalists.

The Post is a fantastic film, a dramatic, intense retelling of these important events from our not-very-distant history that have powerful relevance today.  I highly recommend this film.