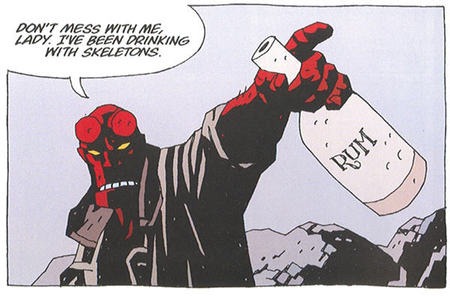 Hellboy: The Island (2005) — Following the two-issue Hellboy mini-series The Third Wish in 2002, it was a long, long, long wait for a follow-up.  Finally, the two-issue The Island arrived in 2005.  This was a tough period for Hellboy fans, with the newly-launched B.P.R.D. mini-series having not yet caught fire (at least, not yet with me), and with such an unprecedentedly lengthy stretch between Hellboy issues.  More frustratingly at the time, The Island was just another short, two-issue story, and it continued with the new, more obscure and slowly-paced style that seemed to have begun with The Third Wish.

The first issue of The Island seems almost like a haiku version of a Hellboy story. It feels extremely experimental, filled with repeated phrases (that seem to have great significance but whose meaning was, at the time, unclear) and abstract imagery.  Both Mr. Mignola’s drawing style and his prose have been simplified to the point of extreme.  At the time, I didn’t know what to make of it.  THIS is what we waited over two years for??  What the heck is going on??!!

Back in 2005 it was frustrating, but over the years I have grown to recognize the genius on display in these issues.  The Island achieves true poetry in its simplicity, and Mr. Mignola’s artwork has never been more haunting and mysterious and beautiful. 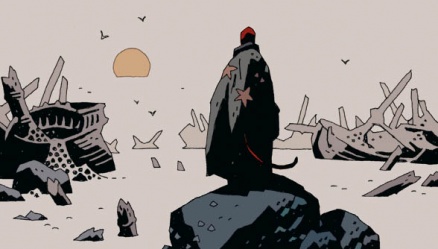 Interestingly, this series continues with Mr. Mignola’s approach of aging his characters along with the comic’s publication history.  As such, an editorial note acknowledges that Hellboy has been hanging out at the bottom of the ocean (where he was left in the cliffhanger ending of The Third Wish #2) for over two years.  To this day I don’t quite know what to make of this.  Was Hellboy dead or unconscious all that time?  What exactly was going on, and how did he survive?  We’ve seen Hellboy survive great injuries before, so I can believe that his demonic nature gives him the ability to somehow survive being underwater all that time.  But what was he doing?  The conclusion I have drawn is that this is an example of Hellboy slipping into his Beast of the Apocalypse nature more than we have ever seen before.  Certainly many of the demons of Hell and other mythical creatures we have seen throughout the series are extremely long-lived.  So is this a hint as to how what would seem extremely lengthy for mortals (two years underwater) passed in the blink of an eye for Hellboy?

Issue #1 of The Island might seem simple, but it’s in fact jammed full of goodies.  I love the drinking with skeletons bit.  It’s great to see the return of Hecate, as I had been wondering what became of her ever since Wake the Devil.  (I love the creepy use of Iron Maiden imagery as she chats with Hellboy.)

The Island #2 is a total change of pace, and one of the most critical single issues in the entire saga.  A creepy old man killed five hundred years earlier resurrects himself out of Hellboy’s blood and proceeds to tell us the entire secret history of the Hellboy universe.  This blew my mind at the time, and continues to dazzle me upon each re-read, as so many connections are made and questions I didn’t even know I had are answered. 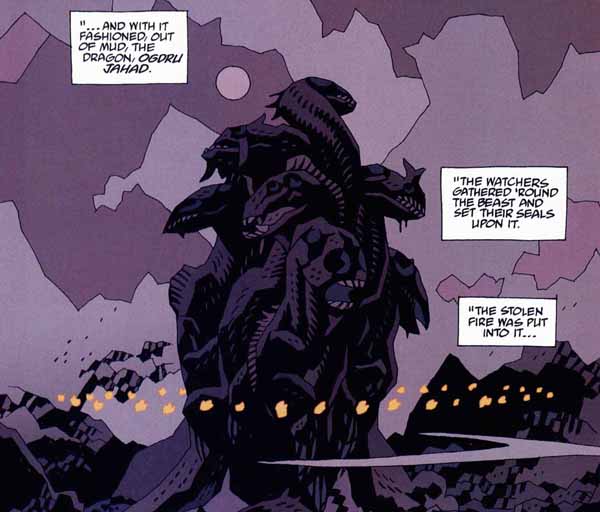 Starting all the way back with the origin of God (I’m not kidding!!) we get the whole story of the Watchers (who’d been referenced before, specifically in B.P.R.D.: Hollow Earth) created by God to watch over the Earth.  But one Watcher “dared raise a hand, to take fire out of the air…” and used that power to create the Ogdru Jahad, the hideous creature(s), now imprisoned, whose menace has been a shadow over Hellboy stories all the way back since that very first mini-series, Seed of Destruction.  We learn that the Ogdru Jahad in turn created the three hundred sixty-nine Ogdru Hem (hideous creatures).  We learn how the other Watchers imprisoned the Ogdru Jahad and hurled them into deep space, before then turning on the one Watcher who had created them.  They struck him into pieces and destroyed all of those pieces… except one.  His right hand.  HOLY SHIT!

Holy cow, that story of the origin of Hellboy’s Right Hand of Doom (not to mention the origin of God, and the Watchers, and the Ogdru Jahad) would have been enough.  But the issue goes on, to give us the origin of the often-mentioned first race of men (formed from the “lesser spirits”), who they went on to build Hyperborea (the Golden Age civilization that has been mentioned several times in previous Hellboy adventures).  I love that we see the distinctly-shaped white lilies — which we’d previously seen grown from Hellboy’s blood (back in the short story The Nature of the Beast) — growing in Hyperborea.  That is an awesome detail.  We’d previously heard of Thoth, without knowing who or what he is, and we get an answer to that here too: turns out he’s the last great king of Hyperborea, who ultimately is seduced to evil and begins worshipping the black goddess.  (We aren’t yet told who or what the black goddess is, but never fear, there is a B.P.R.D. mini-series with that title just a little bit down the road!)  We witness the fall of Hyperborea and see that many of the Ogdru Hem have survived: not dead, just sleeping, entombed in the Earth.  (Not too long after this, when the B.P.R.D. “Hell on Earth” story-line begins, we’ll see these creatures begin to awaken and wreak havoc on the globe in a years-long story-line that is continuing to this day.)  Finally, we learn how the severed hand of the Watcher assumes the shape and form of Hellboy’s big red stone hand.

This is just marvelous, an extraordinarily fascinating and entertaining info-dump of so much back-story from the Hellboy universe.  It’s magnificent!!!  Bravo to Mr. Mignola for having this crazy story in his head all this time, and for finally pulling it all together here.

I’m not quite sure what to make of the ending, in which we see the masked figure (who we’ll later learn is Sir Edward Grey) criticizing the African mystic Mohlomi (who Hellboy met in The Third Wish) for helping Hellboy.  Grey says: “Things will be worse now.  You feel it?”  He’s right, of course.  Things are about to get much, much worse for humanity in the B.P.R.D. series.  But what did Mohlomi do that Sir Edward objected to?  It seems that all he did was help Hellboy escape his enemies and learn some important truths about his history.  Why would Sir Edward object to that?

At the end of the issue, Hellboy sets sail back off into the lonely, white ocean, and that is the last we’ll see of the character for another long while.  The Island #2 also marks the last time for many years that Mr. Mignola would regularly draw Hellboy.  The next big Hellboy epic (which would stretch over four mini-series, beginning with Darkness Calls) would be drawn by another artist, the very-talented Duncan Fegredo.  For the first decade of Hellboy we were accustomed to getting a Mignola written-and-drawn Hellboy mini-series about once a year.  But from this point on, that would no longer be the case.  At the time it was very frustrating for me, as a fan.  But what I didn’t realize was that amazing times for Hellboy fans were right around the corner.  The B.P.R.D. mini-series were just about to really hit their stride and take their place as the centerpiece of the Hellboy universe’s continuing story (a place they still hold today).  Meanwhile, in the next few years, Mr. Mignola would oversee an amazing expansion of the Hellboy mythos, with an array of new mini-series created with an extraordinarily talented team of collaborators (both writers and artists).  It’s been a long time now since I had to wait, impatiently, for two years for the next Hellboy adventure.  These days there are multiple Hellboy universe comics published each and every month!!  And they are of an amazingly consistent, high quality, and they all fit together into a wonderfully elaborate, complex universe.  It’s quite extraordinary.

I’ll be back here soon to tackle the next few B.P.R.D. mini-series, the ones that would really position the events in B.P.R.D. as the most critical stories being told in the Hellboy universe.  We’ll begin with The Black Flame…

The issues discussed in this post are collected in: Hellboy vol. 6 Strange Places.