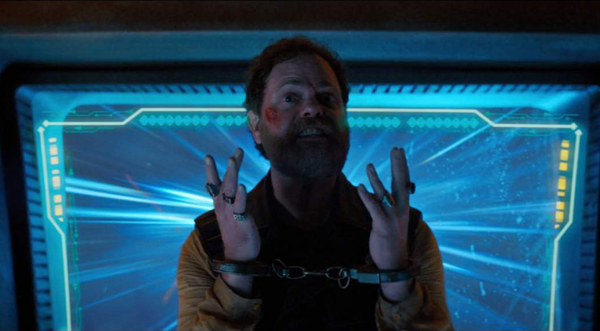 Although I was very lukewarm on the first season of Star Trek: Discovery, I have been extremely impressed with all four of the “Short Trek” short films that have been released over the last few months, as a lead-up to Discovery season two.  They stuck the landing with “The Escape Artist,” which focuses on Harry Mudd.  This charismatic scoundrel appeared in two Original Series episodes, played by Roger C. Carmel, and he also appeared in two Discovery season one episodes, where he was played by The Office’s Rainn Wilson.  Mr. Wilson returns in this Mudd-centric short film, which he also directed!

In “The Escape Artist,” we see that Mudd has been captured by a Tellarate bounty hunter, who is eager to claim the reward that Starfleet has put out for Mudd’s capture.  As Mudd attempts to cajole and scheme his way out of this situation, the short keeps flashing back to Mudd in a variety off similarly sticky situations.

I really like Rainn Wilson and thought he was a great actor to reprise the role of Mudd on Discovery, but I didn’t love the way Discovery portrayed Mudd.  On the Original Series, Mudd was a con-man and a thief, but a mostly jovial one… whereas on Discovery, Mudd was a lot more vicious, to the point of being a murderer.  “The Escape Artist” bridges those two versions of Mudd nicely.  This Mudd feels cleverer and more of a threat that the Original Series Mudd, but we get back to a more fun, good-natured Mudd who is more about scheming to get the good life for himself than he is about causing harm to others.  This is cleverly done.

This short is very funny, which I was glad to see!  The writing was sharp, and played well to Mr. Rainn’s comedic strengths.  Mr. Rainn is great in this role, and this short film gave him his best showcase yet.  I’m also very impressed by the skills demonstrated by Mike McMahan in his script for this short.  Not everyone can write comedy, and not everyone can write for Star Trek, and combining the two is even harder.  But McMahan strikes a perfect tone.  (Mr. McMahan is also apparently overseeing the comedic Star Trek animated series, “Lower Decks,” that is in development.  This short gives me hope for that project.  Mr. McMahan also has a very funny twitter account, @tng_s8, that imagines — with a twisted comedic bent — what Star Trek: The Next Generation season 8 might have looked like.)

As with all the “Short Trek” short films, I’m impressed with the visual scale and scope of this short!  These four shorts seem to have been getting more and more ambitious as they go.  The first two primarily used the standing Discovery ship-board sets, but the third, “The Brightest Star,” took place on a brand-new alien planet and civilization, and “The Escape Artist” is also set almost entirely on brand-new sets.  The bridge of the Tellarite ship is beautifully realized, and in the many flashbacks we also get to see lots of different alien ships and locations.  Most of these are glimpsed for just a minute or two, but they’re all beautifully brought to life.

There are also a lot of other visual effects flourishes that I enjoyed.  There’s that final Mudd-centric visual effects shot (whose details I won’t spoil), of course but I also loved little details like the way the telluride was able to swipe up a holographic projection of Mudd’s rap sheet from his wrist gauntlet.  (That little moment also contained my favorite joke in the short, as the Tellarite is astonished to discover that Mudd’s list of crimes now includes “violating a space whale,” a nod to Mudd’s appearance in “Magic to Make the Sanest Man Go Mad”.  Mudd: “You had to be there.”)

By the way, I also LOVED the Tellarite make-up effects.  THIS is the way to modernize the look of Trek aliens.  The Tellarites we’ve seen on Discovery certainly look different than those seen in the Original Series, and also different than the far-more convincing look to the Tellarites seen on the previous Trek series, Enterprise.  This is a more detailed, more dangerous-looking prosthetic/make-up design for the Tellarites than we’ve seen before.  But it looks great and is able to be new and different while still respecting the old design.  I don’t have any cognitive dissonance believing that these Discovery Tellarites are of the same race as the Tellarites we’ve seen before.  This is in marked contrast to the terrible, terrible look of the Klingons in Discovery season one.  (There are rumors that the Klingon look has been tweaked for season two.  Here’s hoping they can course-correct.)

Bravo to Mr. Wilson for both directing and starring in this short film, and to Mr. McMahan for his great script.  And bravo to all of the Trek creators who have brought these four “Short Treks” to life.  Here’s hoping that Discovery season two can keep this win streak alive…